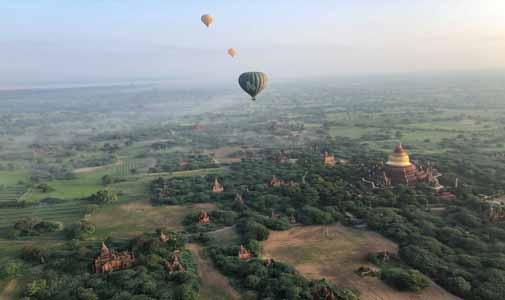 I’ve been dreaming of visiting the ancient city of Bagan ever since I saw a photo of hot air balloons floating over the thousands of temples dotted around the Bagan Archaeological Zone.

Bagan was once the capital of the Pagan Kingdom, the first kingdom that unified the regions that would later constitute modern Myanmar. During the kingdom’s height between the 11th and 13th centuries, more than 10,000 Buddhist temples, pagodas and monasteries were constructed in the Bagan plains alone. Of these, more than 2,200 temples and pagodas are still standing.

And the best way to see them is by hot air balloon, which is exactly what I did during my recent visit to Bagan, along with a bunch of other interesting activities. Here’s how I spent three wonderful days in Bagan.

At 5 a.m., my companion Jason and I were picked up from our hotel and transferred to the launch site for our hot air balloon ride. There are several hot air balloon companies to choose from. We chose Oriental Ballooning, which was excellent. At the launch site, we enjoyed coffee and pastry as the crew prepared the balloons for launch.

Then, after a safety briefing, it was time to take off! Neither Jason nor I had ever been in a hot air balloon, so we were very excited. The balloon rose gently, offering spectacular views of the temple plains as the sun rose. It felt like a dream.

We were in the air for around 40 minutes. After touching down, we celebrated with a champagne toast before returning to the hotel for a full breakfast.

Later that day, we were taken to the house of May Thu Phyo, who welcomed us into her home for a cooking class, using traditional recipes and techniques to prepare authentic Myanmar cuisine. I was expecting to make around three or four dishes, but we ended up creating around 10! And it all tasted sublime.

Day 2: An Electric Bike Ride and a Sunset River Cruise

We spent the first half of the day visiting local markets and temples. But we weren’t on foot or in a car – we were on an electric bike, which was a really fun way to see the city.

In the evening, we were taken to the Irradwaddy River for a private boat trip. We enjoyed local snacks and drinks on board as the sun set. After the hot air balloon ride, this was my favourite activity during our time in Bagan. It was beautiful.

On our final day in Bagan, we were driven to Mount Popa, an extinct volcano more than 1,500 metres above sea level. Once there, we climbed the 777 steps to the top of Taung Kalat, the volcanic plug.

Perched at the top is a monastery, with 360-degree views of the area. But first, you’ll need to brave the hordes of crazy monkeys that hover around the stairs. They won’t hurt you, but they may snatch your hat or sunglasses if you’re not careful!

After taking in the view, we returned to the base and headed for lunch at Popa Mountain Resort, which offers a fantastic view of the sheer-sided plug we’d just climbed.

It was the perfect end to a truly special trip.