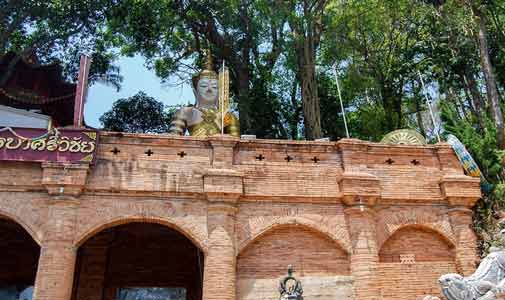 Chiang Mai, Thailand’s second largest city, is well known as being one of the top spots for retirees and digital nomads to settle. The low cost of living, first class healthcare, great food, modern shopping centres, culture and history are just some of the many reasons expats choose to call here home.

However, one of the reasons my wife Jacqueline and I keep returning to Chiang Mai is for the numerous festivals and events that span different times of the year. Whether it’s the over-the-top Songkran water festival, the beautiful February Flower festival or Chinese New Year, the Thai’s certainly know how to party and celebrate.

Things swing into gear in November with Loy Krathong and Yee Ping. These two important celebrations coincide with the full moon of the twelfth Thai month. Yee Ping is celebrated throughout northern Thailand and everywhere in Chiang Mai you will see colourful lanterns decorating homes, businesses, temples and public spaces.

As part of the festival there are activities including traditional Thai dance shows and the official Yee Ping parade with the beauty pageant for the crowning of Miss Yee Ping. However, the highlight is the one night when the sky is filled with khom loi (sky lanterns). These are released into the skies and symbolise letting go of all ills and misfortunes of the previous year and to bring good luck. All flights in Chiang Mai are cancelled on this night due to the sheer volume of lanterns floating through the sky and is probably the most spectacular site I have ever witnessed. It always leaves me in awe.

Another one of our favourite times to be here is the middle of January when the Chiang Mai University (CMU) students graduate. CMU is huge and is nestled between the hip, cafe culture area of Nimman and the base of the nearby mountain, Doi Suthep.

CMU’s large campus has its own fleet of electric buses that ferry the students around the campus and compete with the myriad of scooter riding undergraduates. At this time of year it’s very common to see both riders and their side saddle pillion passengers, the future Thai captains of industry, scooting around Nimman in their graduation gowns clasping congratulatory flowers and stuffed animals.

However, the reason we really love this time is that the graduation celebrations are accompanied by areas especially planted out with flowers in full bloom. The graduates and their families happily pose together amongst the tall hollyhocks, sun flowers and cosmos. We love cycling around the Uni to look at the beautiful, temporary flower displays and gardens that each faculty sets up within the University grounds for the students and families to enjoy. They provide stunning back drops for the graduates to celebrate their achievements.

Not long after graduation, on the first weekend in February, the Chiang Mai Flower Festival swings into gear. Non Buak Hard Public Park inside the old city is transformed with fantastic floral displays, orchid houses, bonsai and all manner of flower related things.

The highlight is the parade on the Saturday morning when multitudes of motorised floats parade around the town. Interspersed between the colourful floats are bands and community groups, many dressed in traditional costumes. The floats are something to behold and represent many facets of Thai life and culture. My favourite float from last year was one including a temple, buddha, horses, the three kings, naga and elephants, all made from flowers. It has to be one of the most beautiful and colourful festivals of the year.

Later in February China Town becomes the focus of attention with Chinese New Year festivities. It is transformed with traditional red lanterns stretching across all the streets surrounding Warorot Market next to the Mae Ping River. Food features heavily during this festival with crowded street markets selling all manner of Thai and Chinese specialities.

A number of stages are also erected throughout the festival area where you can be entertained, day and night, with various performances. Wandering around we joined in with some impromptu dancing in the street with tourists, Thais and the local Chinese.

Of course, Chinese New Year would not be complete without crackers and fireworks which all add to the celebratory atmosphere.

We wrap up our festival celebrations in April with one of the most important events on the Buddhist calendar. April 13th is Thai New Year’s Day and known locally as Songkran. There are deep religious roots associated with this festival including making merit and visiting local temples with food offerings for the Buddhist monks.

Pouring water on Buddha statues, the young and elderly, represents purification and the washing away of one’s sins and bad luck. Whilst these traditions are still observed it has morphed into an ongoing party through all the streets with locals and tourists alike drenching each other in water (sometimes as cold as ice). Whether it be via water pistol, super soaker or a plain old bucket you are not safe anywhere during this period. As it’s one of the hottest times of the year nobody seems to mind and it’s all done in good spirit. Even riding a scooter will not prevent you from being soaked!

Whereas Hua Hin may celebrate for one day and Bangkok for three days, Chiang Mai is the epicentre for celebrations that continue for five days. It really is a fun time of the year.

And One to Avoid…

The one time of the year that expats opt for a temporary change of location from Chiang Mai is from late February. This coincides with the start of what is known locally as the “burning / smoky” season. Farmers commence the traditional practice of burning the rice stubble from the previous harvest in preparation for the next growing season. The ash provides excellent fertiliser for the rice paddies however a side effect is a hit on visibility and poor air quality. The authorities continue to try and introduce new practices however it is an uphill battle changing centuries old practices. The upside is that many expats make this an opportunity to hop over and explore other nearby countries. Cheap direct flights are available from Chiang Mai to Kuala Lumpur, Ho Chi Minh City, Hong Kong, Singapore and multiple locations in China.

Everything you Need to Know About Living  in Thailand