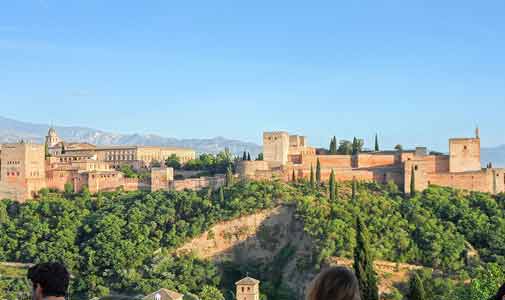 Spain has an ancient and varied culture—very distinct from the cultures of Latin America…though it does share a language and some general customs with its former colonies. Getting to know Spain’s own varied culture will deepen your understanding and enrich your time there.

Spain occupies most of the Iberian Peninsula, which lies at the southwestern end of the European mainland. It is Western Europe’s second-largest country: At 505,370 square kilometres, it’s only slightly smaller than France. However, with a population estimated at just under 49 million, it is sparsely populated for its size—in fact, some stretches in central Spain are among the least populated in Europe. 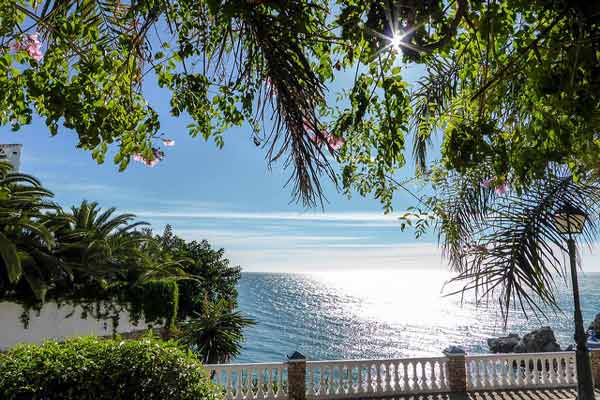 The country is divided into 17 Autonomous Communities (including two island groups, the Balearic Islands in the Mediterranean and the Canary Islands, off the African coast); two autonomous cities in North Africa, Ceuta and Melilla; and three small islands off the coast of Morocco.

Modern Spain includes what were once several separate kingdoms and ethnic/linguistic groups; today’s Autonomous Communities reflect a devolution to many of these historic boundaries. While Castilian Spanish is the official language nationwide, it is spoken as a first tongue by only 74% of the population. The remainder speak local languages that are officially recognised in their Communities by Spain and the European Union.

These languages are closely tied to their respective regions’ history and culture; they are taught in schools and most remain vibrant, living languages. You likely will hear them spoken in the streets, cafés and restaurants when you visit these regions; street and highway signs may be written in these languages; and you may see newspapers and books written in them, as well. 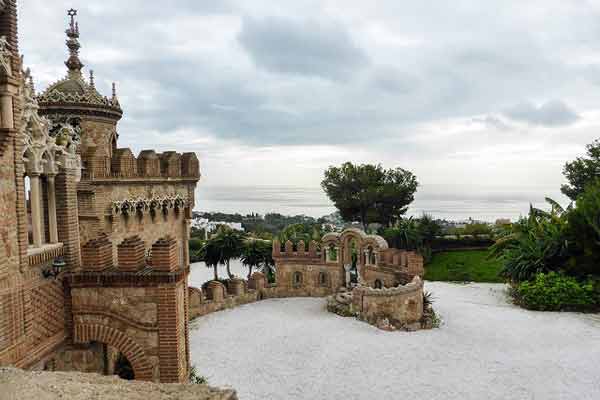 The country’s official name is the Kingdom of Spain. Like Great Britain, Spain is a hereditary monarchy; the current monarch is King Felipe VI (since 2014), and the heir apparent is his eldest daughter, Princess Leonor.

The government is a parliamentary constitutional democracy, under a constitution signed into law in December 1978. The head of government is the prime minister and there are two houses in the legislature, the Senate and the Congress of Deputies.

The monarch generally proposes a prime minister the leader of the party (or coalition) to win the largest number of seats in the last election. This individual is then indirectly elected by the Congress of Deputies. 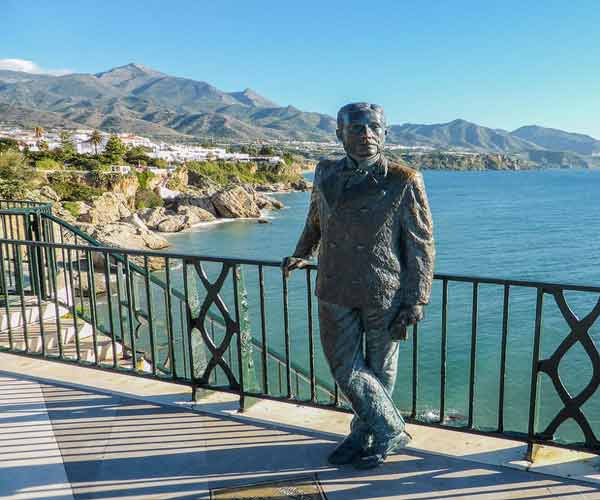 Likewise, if you are getting on a bus, preparing to order in a restaurant, or addressing a shop attendant, it’s polite to greet them with a buenos días before launching into your request. And when you’re trying to attract the attention of that waiter or shop attendant, a polite por favor spoken in their direction is appreciated.

What about the language? Again, it’s polite to address them in Spanish…even if it’s just to say that you don’t speak it. (Try “Por favor, habla inglés?” That is, “Please, do you speak English?”) And don’t worry if you’re in a region like Valencia or Galicia, which has a second official language; Spanish is spoken by all citizens and they won’t expect you to know their local tongue.

For that matter, outside large cities, you may find relatively few English speakers. Those in large cities, on the coasts or otherwise involved in Spain’s massive tourist industry may speak serviceable English—giving directions, taking restaurant orders and the like. But for travelling in the interior, a Spanish phrase book is helpful.

At restaurants, a good waiter will never bring you your bill until you specifically request it. The tradition of sobremesa—lingering over a meal after dessert is served, for good conversation and perhaps an after-dinner drink—is treasured in Spain. It may last half an hour…an hour…and the waiter won’t rush you. For this reason, you may have a long wait for a table at a popular restaurant on a Friday afternoon. But once that table is yours, you can stay as long as you like.

Tipping in Spain is fairly minimal: 10% is fine in most cases. Pay more if service has been exceptional.

As mentioned, be prepared to greet people with a polite buenos días even when you’re just entering a lift.

If you speak Spanish at all, expect to use the formal Usted form when greeting elders or those you don’t know well. Spaniards use the informal tú form widely and on short (or no) acquaintance (as well as its plural, vosotros). Expect to address friends of friends as tú from the outset. Ditto for colleagues, waiters and shop attendants, people you ask for directions in the street… I have even used it in business: in small meetings with clients, for instance. 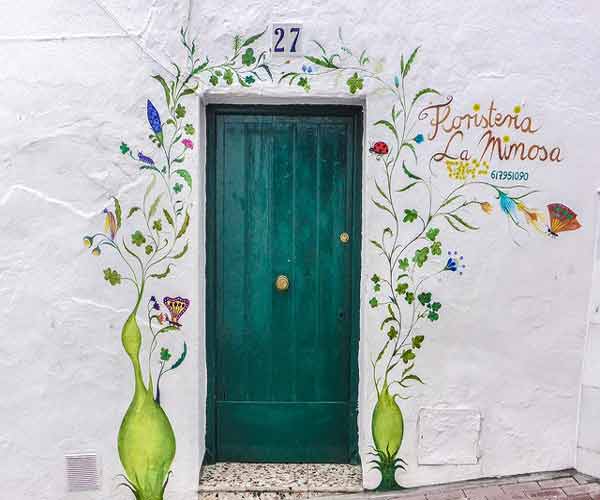 For social events like parties, do not arrive precisely on time. Being late is expected—at least a quarter of an hour. If it’s a large, prolonged event, even being very late (an hour or more) is fine.

However, for business meetings and dinner parties, being on time is expected.

Like many Europeans, Spaniards like being well dressed. Though casual dress has become more…well, casual…in recent years, there are still standards. Even when wearing jeans and runners, look “put together” and well groomed. In large cities, daytime casual wear for both men and women is often more formal than in Australia. For casual night-time outings, slacks or clean jeans for men and slacks or a skirt for women is usual.

Spanish families have traditionally been tight-knit. Except in the very large cities, families often still eat lunch at home together. Major holidays, too, are usually spent together.

Though today 80% of the population lives in urban areas, most Spaniards are only one or two generations away from an agrarian life in a small village or town. As a result, many urban types in Madrid, Barcelona and other metropolises maintain roots in the countryside, where extended family may still live. They may visit there on occasion, especially in the traditional August holiday season, or for family get-togethers and celebrations.

Both religious and civil marriages are recognised in Spain. A religious ceremony—Roman Catholic, Protestant, Muslim or Jewish—does not require a subsequent civil ceremony to be legal, but it must be registered with the local civil authorities for you to get a marriage certificate.

Civil marriages can take place between either heterosexual or same-sex couples. Civil marriages provide for rights to property, inheritance, pension and adoption.

Most of Spain’s Autonomous Communities also allow registration of civil partnerships (pareja de hecho) between either heterosexual or same-sex couples. These allow for kinship, property and inheritance rights. 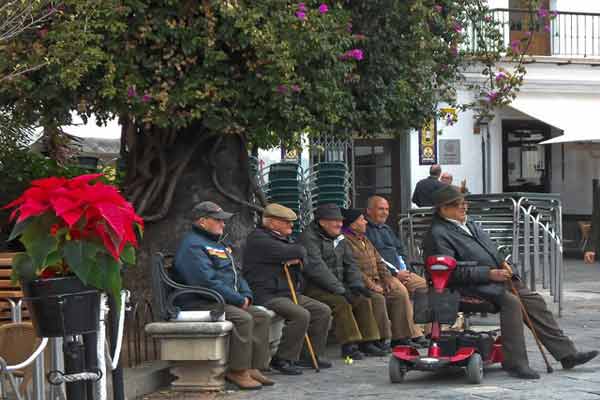 Spaniards generally are outgoing and friendly. It is easy to strike up conversation with them at a bar, café or even in the street. They enjoy having fun…and they’re happy to take you along for the ride. But they can also be quite private about their home life, especially older Spaniards. So even when they are genuinely friendly and warm in public, it may take time before they extend you an invitation to their homes. Don’t take it personally. When that invitation does come, it will be warm and welcoming. 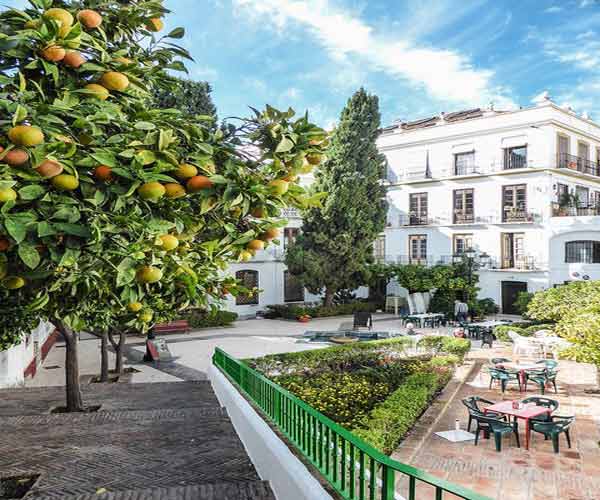 In recent decades, Spain’s rich and varied culinary tradition has begun getting the recognition it deserves. Tapas, of course, gained fame some time ago. But they’re just the start of Spanish cuisine.

Meal time. Spanish meal times skew later than anywhere else in Europe—and they love it that way.

Breakfast is usually a light meal: just coffee (usually a café con leche or strong coffee with milk) or coffee with a pastry or roll. Spaniards generally then take a mid-morning break, when they may have something more substantial, such as a larger pastry, a small sandwich or a slice of tortilla, to hold them over until lunch. (And the Spanish tortilla is an egg-based dish with a range of other ingredients, rather like an Italian frittata. The classic tortilla española is eggs, potato and sometimes onion.) It’s usually accompanied by a café con leche.

Lunch is the big meal of the day, usually served at 2 p.m. or 3 p.m. (And except in high tourist areas, restaurants aren’t open for lunch before at least 1 p.m.) It’s a sit-down meal with friends or family and it lasts an hour to an hour-and-a-half—even longer if it’s a business lunch, a special occasion…or you just have the time to spare.

In many regions, people may meet at an outdoor café or terraza, for a drink before lunch. This can be wine (white or rosé) or, increasingly, a beer or soft drink. A small snack, or tapa, is usually served with the drink. 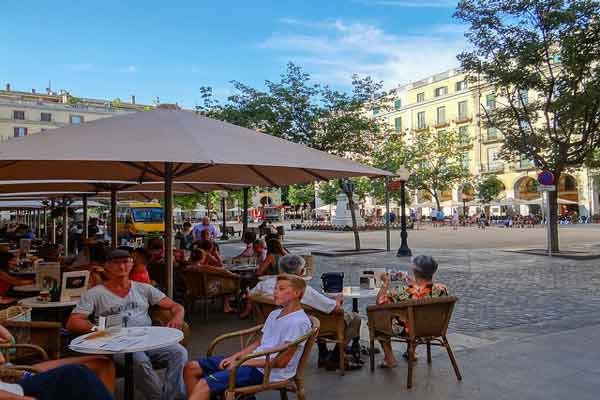 Lunch, or comida, is usually two courses, plus bread, a drink, followed by coffee and/or dessert. The first course can be salad, a soup, prepared vegetables (grilled or sautéed)…even paella. The second, main course is often meat or fish, accompanied by potatoes or another vegetable. Wine, water and beer are the traditional beverages—though many young people now drink soft drinks.

Dessert traditionally was fresh fruit and still is in many homes. But in restaurants today you are likely to be offered cakes, pies and pastries instead. (Flan and arroz con leche—rice pudding—are two traditional Spanish desserts that you’ll still see often.) After-lunch coffee tends to be café solo (an espresso) or a cortado (an espresso cut with a dash of hot milk). At leisurely lunches, the post-prandial coffee is often accompanied by a licor (liqueur), of which Spain has a plethora.

At about 6 p.m., small children may be served a merienda, a snack of some sort, with a glass of milk or cocoa. A couple of hours afterwards, their elders may head out to bar hop and enjoy tapas. These small snacks traditionally accompany an alcoholic drink—beer, wine or sherry. While many bars still adhere to the tradition of free tapas, increasingly you’ll find specialized tapas bars that charge for them (and which you’ll eat instead of dinner). Bars in many parts of Andalucía traditionally charge for tapas, for instance—but serve quite large portions. In northern Spain, tapas—particularly ingredients served on a slice of bread—are called pinchos or pintxos.

Dinner is usually a light meal, especially if eaten at home. It’s generally served no earlier than 9 p.m. and can be served considerably later. In summer, when the sun doesn’t set until 10 p.m. (Spain sits at the far western edge of its time zone), dinner at 11 p.m. is not unusual.

Spain’s regional cuisine varies widely. Fish dishes are common in all the coastal areas, while meat dishes, cold cuts (embutidos) and cured sausages (chorizos) and cured ham (such as jamón serrano) are typical in the interior.

Wine and olive oil are produced throughout most of the country, but especially along the Mediterranean coast and in central and southern Spain. Galicia is known for its white wines, Albariño and Ribeiro, and the Basque Country for txacolí, a white, slightly effervescent wine. Cava—domestic sparkling wine—comes from Cataluña. Navarre produces notable rosés. And red wine is produced throughout the country.

The northwest coast, especially the provinces of Cantabria and Asturias, are known for their cider. This is hard cider, effervescent, served in wide-mouthed glasses a small amount at a time. (Let the waiter pour.) 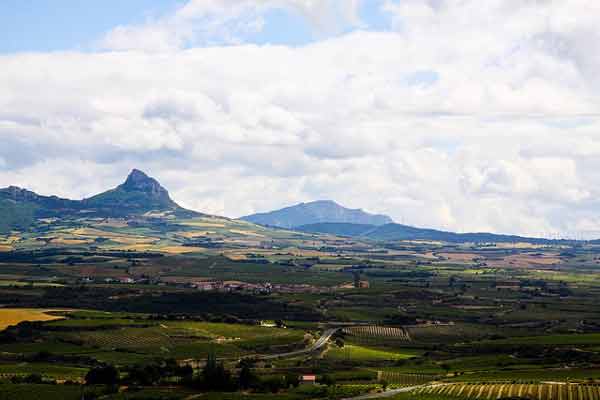 If you are a tourist in Spain and want to drive a car, it’s advisable to get an International Driver’s License. (You can likely rent a car without one, but if you commit a driving infraction and are stopped by the police, the officer may ask to see one.)

Note that most cars available for rent in Spain are manual transmission. You may need to request an automatic transmission if you need one…and you may pay more for it. Spaniards drive on the right and overtake on the left; it’s considered bad manners to continually drive on the left.