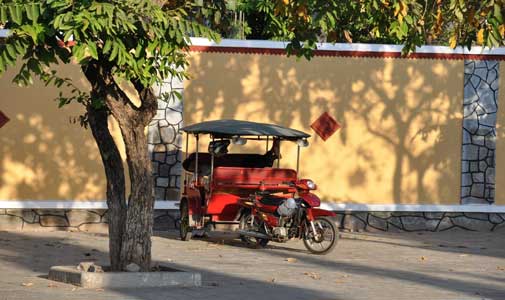 When I first arrived in the Cambodian capital of Phnom Penh, I was less than impressed. Glitzy high-rises were few and far between. When I tried to hail a taxi, I ended up riding askew on the back of some stranger’s motorbike in chaotic traffic (I had never encountered a motorbike taxi before; the concept completely threw me). And the humidity made the heat oppressive—in April, the hottest month, temperatures rarely dip below 31 C.

Moving here was a mistake. Maybe, I fretted, I really am not a Southeast Asia kind of person and was just blinded by my love of spicy food and exotic temples.

But before the rivers of sweat had dried (well, not exactly, they never dry), I was singing a new tune. “Come visit me,” the song went. “Cambodia is amazing!” I would say to friends and family, enticing them across for visits.

The transition was quick—barely a couple of weeks in, I was smitten by what I now thought of as an adorable country and its friendly, calm people.

Phnom Penh is a small city with a few distinct neighbourhoods that feature prominently in expat life here. The first place you’re likely to discover is the Expats’ Quarter (aka BKK1). This is where a lot of new arrivals start out and where locals and foreigners mingle in equal measure.

If you want to spend some time checking out the city you’ll find many reasonable places to stay here, such as the 252 Hotel (on street 252) or the lovely Anise Villas, for less than $80 a night—and numerous budget hotels for less than half that, as well as cafes, bars, spas and restaurants aplenty. You’ll feel like you’re on holiday when you hang out here. It also helps that you will meet lots of expats here who help you feel right at home.

After a week in BKK1, I was ready to start looking for a home of my own, which led me to explore other parts of the city. Less touristy—and therefore less expensive—these neighbourhoods are the perfect place to test-drive local life.

Some of my favourite residential neighbourhoods include around the Russian and central markets, and near Tuol Sleng (the genocide museum—an odd address for sure, but a nice neighbourhood). This is where I settled. It’s convenient, close to all the markets and interesting neighbourhoods and has plenty of quiet streets dotted with comfortable houses.

A two-bedroom apartment can be had in any of these neighbourhoods for $400 to $500. If you’re willing to a go a little further from BKK1 and the city centre, you can get a house with a garden for that same price.

It doesn’t hurt at all that life is so affordable in Phnom Penh. A meal of Khmer-style noodles with meat and vegetables, or Vietnamese beef pho soup and an iced coffee, won’t cost more than $5. And the iced coffee here is the most satisfying and fortifying I’ve ever had. It’s more like a coffee dessert if you get it with milk—in much of east Asia ‘milk’ means sweetened, condensed milk. Milk is only fresh when advertised as such. The coffee itself is made with a Vietnamese-style filter. The resulting strong, sweet, iced coffee is heaven in a cup—or, sometimes in a plastic baggie with a straw stuck in it—and can be a huge boost of energy in the sweltering afternoon heat.

If you are feeling a bit fancy, there are loads of great restaurants to explore. Because of its large and varied expat population, Phnom Penh has a wide range of cuisines—ranging from Spanish tapas, Indian thalis, British pub food, Brazilian steakhouses, lots of amazing French restaurants and even vegan and organic restaurants.

My absolute favourite French spot is Comme a la Maison, a pleasant bakery and restaurant where you can get a meal of comforting ratatouille and homemade ice cream for dessert for about $15. Or walk along the Mekong riverside—a street hugging the curved shoreline of the river lit up with pubs, bars and restaurants that stretch on for miles and end with a fun night market.

Phnom Penh has so much more to offer than first meets the eye—in no time you will make friends, find places you love and slip right into expat life. You will also find a gym you like—the kind where you can get on a treadmill facing a large window and watch the city go past or swim laps before sweating it out in a steam room. There is a fair bit of construction in the city—buildings are getting taller, soon there’ll be skyscrapers aplenty; but happily Phnom Penh retains its unique charm. It certainly charmed me…

The Pros and Cons of Living in Cambodia