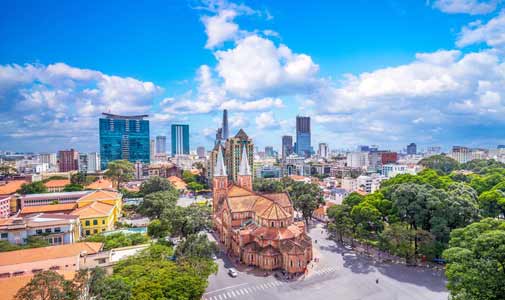 From the mountainous northern border with China, Vietnam stretches some 1650 kilometres to the southern coast at the Gulf of Thailand. Geographically, it has three different climate regions, temperate in the north, a mix of both in its central region and tropical in the south. This is on account of the long north-south shape of the country.

Ho Chi Minh City, lying in the south, has a tropical climate all year round. Even though it can snow in the North of the country, Ho Chi Minh City is sheltered from the colder northern air and the dry season is warm to hot with a lot of sunshine. On average, the city experiences between 2,400 to 2,700 hours of sunshine per year.

Ho Chi Minh, Vietnam’s largest city, has an annual average temperature of 27 C but never falls below 15 C. It has two distinct seasons, the northeast monsoon (or dry season in the south) which extends from around November to April and the southwest monsoon (rainy season) from May through to October. Humidity levels average 75% throughout the year but are higher during the rainy season. For those not accustomed to high humidity, it takes a little while to get used to, but once acclimatised, it’s business as usual.

During the rainy season, Ho Chi Minh City weather gets pretty wet. The annual rainfall exceeds 1500 millimetres over about 150 rainy days per year and most of it happens over this period. The least amount of rainfall occurs in February when the average rainfall plummets to just two millimetres. Most precipitation falls in September, with a hefty average of 318 millimetres. The rain falls in short but heavy showers, so it’s possible to still enjoy sunny days even during the wet summer months. And for those of us that live there, the daily rain isn’t all bad news as it brings a welcome drop in temperature and freshens up the air.

Average minimum and maximum temperatures range between 22 C and 34 C all year round. 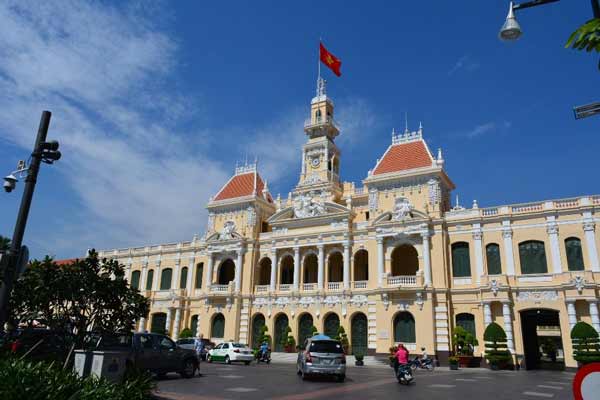 December has the lowest average temperature of the whole year at around 26 C with bright sunny days of about 33 C and cool evenings averaging 22 C. Over the Christmas period, it’s not unusual to see locals sporting multiple layers of clothes underneath heavy “bubble” jackets to keep warm, while most visitors are still in their summer outfits!

April has the highest temperatures on average at around 30 C. With daytime temperature averaging 34 C and night-time lows averaging 26 C. The averages don’t seem much, but in the build-up to the wet season, the heat can feel fierce. It reminds us of the build-up in Northern Australia.

Accommodation in Ho Chi Minh City is kept cool year-round by air-conditioning units in bedrooms and living rooms. These units are serviced regularly, and electricity bills are still relatively cheap compared to western countries. We ran our AC almost 24/7 in our two-bedroom, spacious apartment and our electricity bill averaged around $120 per month. We find many locals prefer to keep their doors and windows open to let the breeze flow through rather than chill the room artificially.

The constant warm temperatures all year round does require some adjustment to your habits if you’re not used to them (a bit like parts of Australia really). Most people get out and exercise in the early morning or cooler evenings. It’s important to stay hydrated when you’re walking around and wear a hat and sun protection.

We’ve modified our wardrobe to suit the climate. Light and loose-fitting clothes are the norm here in the tropics. Shorts and sandals for the guys and a summer dress for the ladies make for a much more comfortable experience when getting about. 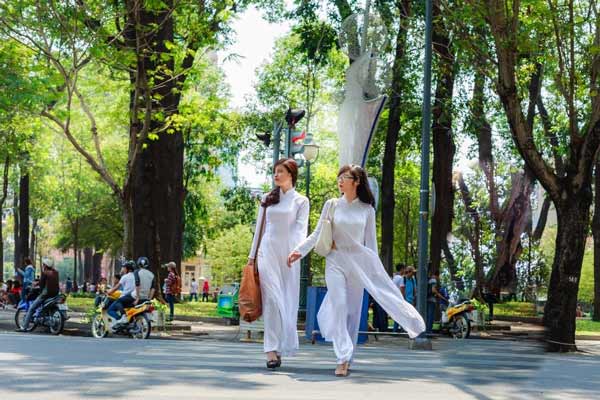 Being quite a conservative country, the locals tend to remain covered up, although we’ve found a lot of the younger men and boys tend to favour shorts now as well. Girls especially like to protect their skin from the sun. Having a tan here isn’t fashionable like it is at home. Quite the opposite in fact. Ladies do everything they can to keep their skin as light as possible.

In the rainy season we plan our days to stay dry and there’s plenty of indoor activities to stay busy and entertained when it’s raining outside.

For winter wimps like my wife Sharyn and I, the weather in Ho Chi Minh City is ideal. No aching bones from cold winter days and we don’t need to maintain a winter wardrobe. For those who don’t like the tropical heat, there’s plenty of places to stay cool.

Is Ho Chi Minh City a Safe Place to Live?