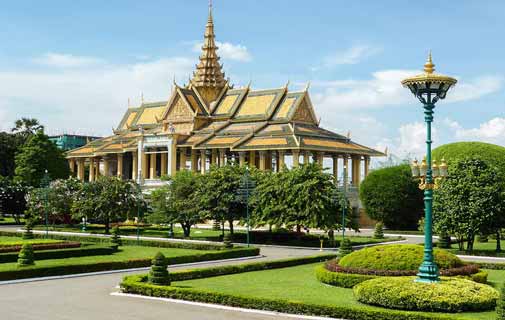 Cambodia is fondly known as the “Kingdom of Wonder”.

A rising wave of affordable aviation deals to exotic destinations has been a turning point for travel. Never before in human history have so many people booked holidays to countries they have never heard of… But that’s okay, it’s all part of the adventure!

For those savvy enough to buy bargain tickets to Cambodia, but who aren’t quite sure where the country is or what it is like, this is for you.

Officially named the Kingdom of Cambodia, it is also known as Kampuchea, Srok Khmer or Cambodge. But for its many fans, it is fondly called the “Kingdom of Wonder”. Entirely situated in the tropics and part of the Indomalayan ecozone, the country is conveniently in the Indochina time zone, which is just three hours behind AEST. 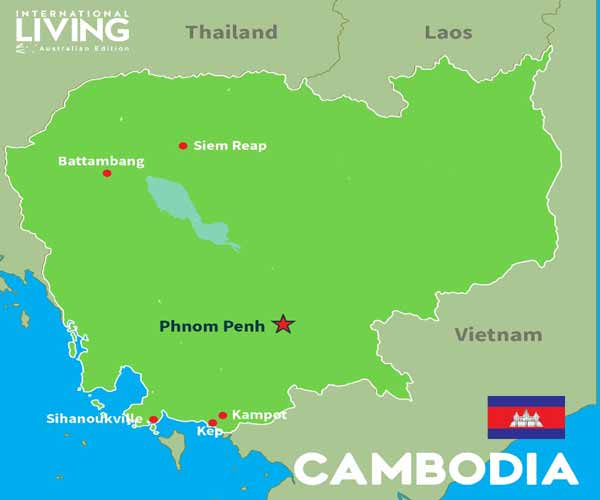 The south of the country has a 443-kilometre coastline boasting beaches, mangroves and idyllic islands, which are relatively undeveloped in comparison to the region’s more commercial coastal areas.

Cambodia is neither a very big nor a very small territory. But at 181,035 square kilometres, it has plenty of room for many impressive landscapes, including mountain ranges in the northern border area and, even more prominently, the Cardamom and Elephant Mountains in the south.

However, it is the country’s rivers and lakes that are the most outstanding geographic features, with the mighty Mekong River surging down into Vietnam while the Tonle Sap is the largest freshwater lake in Southeast Asia, with its unique reversing flow of the Tonle Sap River each year during the monsoon rains. It is so ecologically important that UNESCO designated the Tonle Sap as a listed biosphere reserve, with the government providing special safeguards and protections for it.

The country is a constitutional monarchy headed by King Norodom Sihamoni, son of former king Norodom Sihanouk, who was the father of Cambodian independence in 1953 after a decade of peacefully intense lobbying of the French authorities into submission.

Khmer is the official national language and while in the colonial era French had been the expat lingua franca (common language), nowadays English is the most widely spoken second language, particularly among Cambodia’s large youth demographic, the business community and tourism sector.

Chinese dialects are spoken by families with Sino-Khmer heritage, and Russian is even spoken by a small number of people educated in the Soviet Union during the 1980s Cold War era. A most interesting fact is that King Norodom Sihamoni is the only monarch in the world to speak Czech fluently, having been educated in Czechoslovakia as a child. This is much to the delight of the Czech Republic, which received the king with a great deal of enthusiasm during a recent state visit.

With 25 provinces and around 16 million people, the country’s population is made up of a mix of 90% Khmer, 5% Vietnamese, 1% Chinese and 4% other ethnic minorities. The capital city is Phnom Penh, where as many as 2.5 million people live and work, while the next largest cities and urban population centres are Battambang, Kampong Cham, Siem Reap and Sihanoukville.

Though it is still a developing country, it might surprise you to learn it actually has the seventh fastest-growing economy in the world. In the past decade, the country has been one of the few to have steadfastly met and surpassed many of the millennium goals for poverty reduction and improved literacy.

The Khmer riel is the official currency and tends to convert at KHR 4,000 to AU$1.40. Usage of the Khmer riel has increased following educational campaigns and support from the National Bank of Cambodia. In the past, Khmer riel made up as little as 5% of cash transactions but has now tripled due to growing confidence in the economy. The US dollar still remains as a de facto currency, mainly for large purchases, but most people use a mix of both the riel and US dollar in their daily lives.

The country has attracted well over 100 commercial banks and microfinance institutions, which accept deposits in Khmer riel, US dollars, Thai baht, Vietnamese dong and even Chinese renminbi. There are more than 1,490 ATMs spread across the main cities and provinces, and as many as 14,000 point-of-sale terminals at retail outlets and specialist vendors.

Cambodia’s international country code is +855 and its telecoms infrastructure is considered to be of a very high standard due to rapid expansion and investment over the past decade. There are currently six active mobile network operators, with three of the largest leading the market with nationwide coverage, 4G and LTE network technology, plus very affordable deals for fast and generous mobile internet packages.

Getting to and from the country is as simple as buying a plane ticket online, with international flights scheduled daily at the three main airports in Phnom Penh, Siem Reap and Sihanoukville. Direct flights are available between destinations all over the Asia-Pacific region, not to mention a huge range of connecting flight options via nearby hubs such as Singapore, Hong Kong and Bangkok.

Short hops can cost as little as $50 for a domestic return flight and $75 to $150 for a regional flight to destinations like Vietnam, Malaysia and Laos, making Cambodia a firm favourite for adventurous travellers looking to explore Southeast Asia.