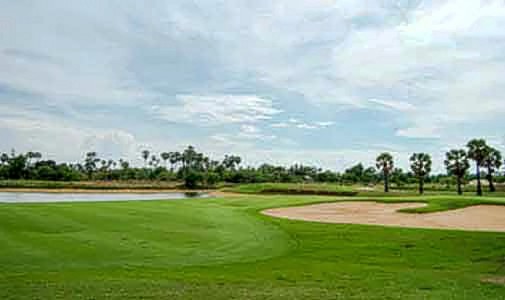 It’s fair to say that most people who dream of visiting Cambodia are more likely to be influenced by the exotic draw of its ancient temples, royal palaces and saffron-robed monks than anything else.

The majority of Cambodia’s 5 million annual foreign tourists want to experience sunrise at the spectacular temples of Angkor Wat in Siem Reap, tour Phnom Penh’s historic landmarks and markets in a tuk tuk and head to the laidback beaches and undeveloped islands on the southern coast.

But recently a different kind of tourist have been visiting for reasons you might not have expected—to play as many rounds of golf during their trip as possible. Golfing is the sweet spot in the country’s tourism strategy which is successfully attracting new visitors.

It’s become increasingly common for arriving tourists to be seen picking up their clubs from arrivals at Siem Reap and Phnom Penh airports having booked a golfing holiday package with one of several specialist travel agencies that promote a range of tours lasting anywhere from two days to a week.

Not only is the weather great for a round of golf throughout the year but the idyllic backdrops make it a hole in one for avid golfers who are more than willing to extend their trip by an extra few days so they can play at another one of Cambodia’s interesting and ambitiously designed courses.

Golf first started gaining momentum in the late 1990’s due to an informal group of influential local players who wanted to see a Cambodian golf industry.

They actively encouraged investors to develop courses so they had somewhere to play. If they could attract some expats to join then that would be fantastic but nobody anticipated quite how popular it would become with tourists.

The country went from having nothing to a total of 10 strikingly attractive courses as of 2017 with several more slated to launch in the coming year. Most of these new developments became such massive projects that heavy duty support was enlisted from some of the most famous names in golf including Sir Nick Faldo, IMG and Nicklaus Design.

“Back in the early 2000’s the golfing scene was made up of a small number of local politicians, businessmen and expatriates all playing the same one or two courses,” says Peter Target, a retiree and golf fanatic who spends part of each year in Cambodia, “It was pretty cosy at that time with a split of about 50:50 expat and Cambodian players but in the last few years tourists have become a noticeably welcome part of the mix.

“Three provinces in Cambodia now have courses: Phnom Penh has five, Siem Reap has three and Koh Kong has two with more being developed as we speak. It is still quite an elite sport but younger middle-class Cambodians are getting into the swing of things which will open up the sport in the future. With the increased demand, there has even been a local golf magazine launched in English and Khmer as well as a separate Chinese language edition which covers the latest local news and charts the booming industry.”

David Baron is another sign of how advanced things are becoming as the British expat has spent the past five years working as Director of Golf at Angkor Golf Resort in Siem Reap where he is a prominent supporter of Cambodia as an up-and-coming golfing destination.

“This country has a certain natural charm and travellers have a sense of delving into the unknown. In Siem Reap we have three international standard golf courses all within 20 to 30 minutes of each other which makes it very convenient for a short golf break. The city also offers excellent value for money with a wide range of accommodation and vibrant nightlife.

“In the past five years tourism in Cambodia has grown strongly with arrivals increasing 48% and golf specific tourism is growing at an equally rapid pace. As awareness and international flight connectivity continues to improve I believe this trend will continue for years to come.”

If you are planning on visiting Angkor Wat but aren’t sure whether golf standards in Cambodia will be up to par then prepare yourself for a surprise. There are now three international standard golf courses in Siem Reap, each of which has either been built or redeveloped quite recently with large amounts of money being invested. All three courses have standout features which is why tourists book holidays long enough for them to enjoy a round or two on each course. Prices are slightly higher than in Phnom Penh but at this level it is considered very reasonable for the quality of experience.

The Sofitel Phokeethra Country Club was the first international standard golf course to open in Siem Reap in 2007. Designed to a championship standard with a layout that promises to test even the most strategic of players, it has also been chosen to host official Asian PGA Tour events like the Johnnie Walker Cambodian Open from 2007 to 2010. Green fees for the 18-hole course are $157 and $94 for the 9-hole course.

The Angkor Golf Resort opened in January 2008 to significant acclaim thanks in no small part to its 18-hole course having been designed by the legendary Sir Nick Faldo. It was a bold move by all parties involved and the resort has remained a “must do” for virtually every golf enthusiast visiting Siem Reap. Describing the course he designed, Sir Nick Faldo explained that, “Our fairways are typically generous but our bunkering style is impressively bold. The greens have plenty of subtle undulations rewarding and encouraging a variety of approach shots.” Green fees for the 18-hole course are $163 and $115 for the 9-hole course. There are also special packages a available on their website.

The third and most recent international standard course to open in 2009 is the Booyoung Country Club which was designed by respected Japanese architect Kentaro Sato. The course offers a choice of five tees on each hole to accommodate players of all abilities while the club’s immaculately pristine course and opulent clubhouse are said to have cost US$150,000,000 to construct. Green fees for the 18-hole course are $157 and $78 for the 9-hole course.

The Best Courses and Green Fees in Phnom Penh

While Siem Reap attracts a lot of tourists, the golfing scene in Phnom Penh is more diverse. This mix of long-term expats, local businessmen and politicians tend to be welcoming and if you hang around long enough you may well be invited to play a round with some typically welcoming Cambodians. Phnom Penh has four 18-hole golf courses, a 9-hole course and a 36-hole course also being designed by Sir Nick Faldo for the Vattanac Golf Resort that is scheduled to launch in 2018.

The Cambodia Golf & Country Club was the very first golf course to open in Cambodia in 1997 and boasts an air of tranquillity due to its location 45 minutes outside of the city centre. Green fees are the lowest in the country for an 18-hole course at $62 (inclusive of a caddie) which makes for a very affordable day out in the capital.

The Royal Cambodia Phnom Penh Golf Club was the second golf course to open in 1999 at a location much closer to the city making it popular with locals and expats. Though it can’t be compared directly with the newer courses in Phnom Penh it does offer an amazing setting in mature wetlands surrounded by palm trees and has some water hazards that can prove testing for golfers of any level. Green fees for the 18-hole course are $92 on the weekend (inclusive of a caddie.)

City Golf Cambodia opened in 2010 with an interesting offering of a two-tier driving range, chipping and putting green along with Cambodia’s first par three 9-hole course which is known for its uniqueness. Located north of Toul Kork, the course benefits from easy access and having floodlights at night. Green fees for the 9-hole course are $20 in the day and $26 at night.

Grand Phnom Penh Golf Club is a golf course designed by Nicklaus Design and was the first international standard course in Phnom Penh when it opened in 2011. Regretfully it is not open to the general public and is for private members only, although some specialist travel agents offer limited packages that include extra costs for hotel and transportation.

Garden City Golf Club was a turning point for the golfing scene in Phnom Penh when it opened in 2013. Featuring extensive mounds and water hazards it is a visually impressive course and if its championship length of 7,361 yards sounds intimidating you needn’t worry as an additional four tees were included in the design to account for people of all golfing abilities.

It is regarded as one of the best golf courses in Phnom Penh and on par with the pristine courses of Siem Reap. 18-holes cost $125 on weekends and $98 during week, plus $20 for caddies.

The Biggest Course in Cambodia

Halfway between Sihanoukville and Koh Kong on the southern coast of Cambodia at Botum Sakor National Park are the country’s newest courses which have been completed as part of the Dara Sakor Golf Club. The first to open was the Ocean Course in 2015 followed by the Hill View Course earlier this year and when the third course is completed it will be the first club in the country to boast 54 holes. It is only possible to play if you have made an advanced reservation with prices subject to confirmation. It is part of a massive resort believed to be the biggest in Southeast Asia covering a whooping 360 square kilometres of land and featuring a high-end resort with a gambling complex and massive infrastructure being planned: Facebook.com/darasakorcambodia.

• What Time of Day is Best to Play?
Local golfers recommend aiming for a morning tee-off because even during rainy season the weather tends to be clear earlier in the day before raining in the afternoon from June to October. In the rest of the year any time of day is fine but in high season you are recommend to book in advance due to demand.

• Renting Golf Clubs or Bringing Your Own?
It is possible to rent clubs at various courses for around $30 but this leaves you open to getting clubs that aren’t in optimum conditions. It makes more sense to bring your own clubs with you to guarantee you will enjoy the most of each course.

• What is the Acceptable Dress Code?
Golf courses enforce a dress code and expect you to wear respectable shirts, trousers, shorts, socks, and shoes. Caps are also permitted. Remember even if the price to play is relatively low that standards are very high at most clubs.

• What is the Best Local Golf News Source?
Cambodia Golf Today is published about six times per year featuring local golf news and tournament coverage plus interviews with Cambodian and expat golfers. It can be read for free on their website: See: Cambodiagolftoday.com.