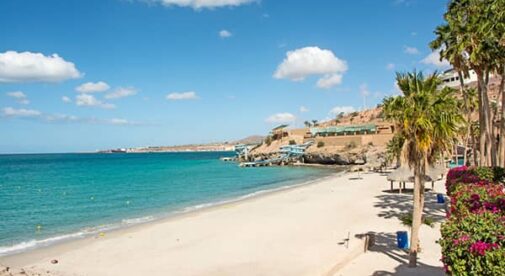 La Paz charmed me again this past weekend. It was my base for a whale watching trip…and what a trip it was…

I stayed in the lovely Costa Baja resort. The golf course has stunning views. The boating from the marina is world-class. I came to La Paz for some R&R…for some shopping and entertainment…

More importantly, I wanted to get the latest on how the real estate market is shaping up there.

This is a very special place where your real estate dollars can stretch far. I’m talking about a nice home for under $100,000…a great sea-view home for under $300,000…and everything in between.

A place where we can make money? Could La Paz become the next Puerto Vallarta? The next Cabo? Could it be one of the best small cities in the world to live in?

Let me tell you why it’s so attractive, and how far your dollars stretch…

The natural beauty is absolutely unique and spectacular. Cactus-studded hills roll down to white-sand beaches and the turquoise waters of the Sea of Cortez, considered one of the most wildlife rich and biodiverse bodies of water in the world. Some of the coastline reminds me of the most dramatic of the Greek islands.

The palm-tree-lined malecón, or seaside promenade, is the centerpiece…the beating heart…of La Paz, stretching about three miles along a gracefully curving bay and featuring dramatic sculptures from Mexican and international artists. You’ll find couples strolling, kids scampering about as families watch on, people exercising and cycling…or just enjoying the day. Early evenings are a favorite time, when the vendors come out and you can pick up an ice cream for a few pesos. Seafood restaurants at the water’s edge are popular here. Locals come here for two- and three-hour lunches, and prices are a fraction of what I pay back in Cabo.

In fact, things are simply cheap here for everything across the board compared to the gringo prices in Los Cabos. As a Cabo resident, it’s quite refreshing.

The malecón has been spruced up over the past three years. And, La Paz, in general has been gentrified, with nice restaurants, big box stores, hospitals…everything you’d expect of a city of 250,000 people that is relatively prosperous thanks to the government activities and the port. And, most importantly, this sleepy, very Mexican city—capital of Baja California Sur state—has emerged from the security problems that plagued it five to 10 years ago to become a destination that has attracted the notice of travelers and expats. This was the first visit where I saw a lot of young Americans. They join the retirement set—especially Canadians—that call it home full- or part-time.

Still, despite that, and the fact that I’ve noticed more and more travel vloggers going there in the last couple of years, it’s not on the main expat trail, and it’s very much up-and-coming as far as a tourist destination.

I’ll put it to you this way: for someone coming to southern Baja for the first time, they’ll most likely head to Cabo San Lucas or San Jose del Cabo on either side of the tip of the peninsula. That’s entry level. Kind of like Cancún on the Riviera Maya.

Then people who are perhaps more adventurous or those who become more comfortable and familiar with southern Baja, they move onto other parts of the region.

Todos Santos obviously is the next big destination on the radar. I’d describe as in the early stages of being “Tulum-ified.” It’s got art galleries coming in, nice restaurants, boutique hotels…all attracting a very well-heeled crowd. It’s popular with moneyed ex-hippie types. It’s a big money location, and real estate there is not cheap. The restaurants and little shops are targeted at the higher-end tourist and gringo market.

There’s the East Cape, south of La Paz, which is much more rugged with dirt roads and few population centers…or the amenities that come with them. It’s a simpler type of place; a good location if you want to go off-grid. The Four Seasons did go into an area that is more accessible. But, in general, it’s a very rustic place, with an off the beaten path type of experience.

Then you’ve got La Paz, a mid-size city, with the Sea of Cortez, beaches, shopping, restaurants…and resort and gated community options if you want them. It’s a unique mix, unlike anything I’ve encountered in Mexico, that makes it very livable.

Just across the water from the malecón and the heart of the city is Paraiso del Mar, which is a golf and condo community on a narrow peninsula. To the north, past the end of the malecón, you’ve got the Marina CostaBaja resort. It hosts very high-end yachts. There’s a nice golf course. It’s got a couple of hotels and a high-end residential component. You also have Pedregal de La Paz, which is a gated community of luxury homes overlooking the Sea of Cortez.

Real estate prices in La Paz have been low and stayed low because it was by and large off the main expat trail. And when the security situation went downhill about a decade ago, fewer expats were coming to town, causing that expat market to slow. So it’s been primarily a local market.

Today, you can get a home there for less than a hundred thousand, like this three-bedroom in a gated community listed at $83,052. This is a very typical listing. 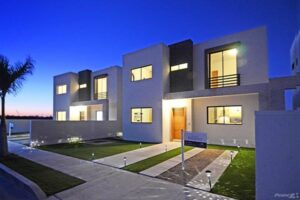 Spend a bit more, in the $200,000 to $300,000 bracket, and you can get some very lovely and large sea-view homes with luxury finishes and expansive terraces, also in gated communities. And you can probably get these for a lot less than the asking price due to the state of the market. 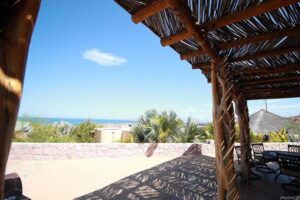 This three-bedroom home, 2,300 square feet and set on a quarter-acre lot in a beachfront development is listed at $299,000. And it comes furnished.

If you want a house in Los Cabos with an ocean view, you really need to be paying $700,000…$800,000…up to $10 million, plus. Granted, I’m not comparing like with like, because in La Paz they’ve got smaller homes on smaller lots. But you can get that in La Paz for $200,000…$250,000…$300,000…with a more low-key lifestyle that you might prefer. You’ve got the privacy of an exclusive gated community and all the amazing tourist experience activities and unspoiled natural beauty, plus you’re in a proper Mexican city with its conveniences—and low prices.

I do expect increasing visitor numbers and growing demand—and rising prices—in La Paz eventually as Los Cabos becomes maxed out and too expensive with the arrival of all the major high-end resorts that have opened or are set to open in the coming years. That’s as long as the security situation in La Paz continues to remain stable.

From Los Cabos it’s about a two-hour drive, much of it is coastal highway along a shoreline alternating between white-sand beaches and rocky coves pounded by Pacific surf. That relatively short drive time makes it accessible from the international airport, which will be key to La Paz opening up further. La Paz technically has an international airport. But while in its hey-day it hosted direct flights from several points north, it’s been relegated to more of a regional hub.

Can we make money from investing in real estate here? Even now there are attractively priced properties all over. Will they go up in value?

Here’s my take: La Paz will take off once the security situation stays as it is. When you spend time there now it’s hard to believe that a few short years ago the cloud of insecurity hung over it.

Each time to go back I get more comfortable there. I’m staying in touch with local contacts to understand the prospect for an extended return to the peaceful La Paz I love. And I’m looking for potential RETA-only deals.

Carl says: Hello Ronan. Recently you talked about buying Real Estate Owned (REO) properties from banks in Portugal in which you purchased yourself. Can you inform me whom or which banks and contact person in bank to talk with about purchasing REO in Lagos? As we (my wife and I) are interested in a two-bedroom property there.

We want to purchase a place that is in walking distance of the beach, restaurants, grocery stores, so a person would not need a car. It would be great if we would have an ocean view. Ocean view may not be possible with our budget of $480,000. When we are not in Portugal our place can be rented out easily for up to one-year.

Ronan says: Hi Carl, if you’re a RETA member, I suggest checking out my recent Portugal deal report. You can follow the link there and get in touch with my contact in the Algarve. Also, feel free to drop an email to your RETA concierge, Nancy, with any questions.

Dream Homes Overseas from Only $39K