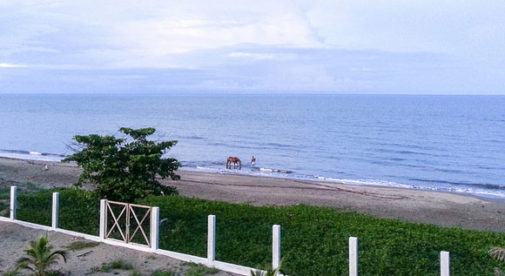 The town of Las Tablas on Panama’s Pacific Coast, is renowned for everything from colorful Carnival celebrations to artisanal textiles, pottery, and leatherwork. And beaches. Life in this sunny region of Panama is good , say the expats who, in increasing numbers, have begun to settle there.

“Las Tablas is graced with more sunny days and less humidity than any other part of the country,” says InternationalLiving.com Panama editor Jessica Ramesch. “And the cost of living is the lowest in Panama. Here, a couple can easily live on $1,000 a month, including rent.”

Originally from St. Louis, expats Joyclyn and Armand Brodeur came to Las Tablas in August 2014 to test-drive their Panama retirement.

“The couple yearned for a tropical, beach lifestyle,” Ramesch reports. “At the same time, they wanted to choose a place where it was possible to live on a Social Security check.”

The Brodeurs chose Las Tablas so they could live well on little, without sacrificing the good things in life. Utilities are also inexpensive and they rent their small home for $200 a month.

“The Brodeurs are most enthusiastic about the quality and affordability of the healthcare, however. Both have been to a local dentist and were impressed with the offices, equipment, and thorough manner,” says Ramesch.

With more money in their pockets and no shortage of time on their hands, the two have been able to fully immerse themselves in the culture of their new home.

Attending a recent festival in rural Panama, Joyclyn said, “I saw a bull run, and it was fascinating.” At this festival, there were oxcarts painted in bright primary colors, local boys in traditional garb, and girls in richly embroidered polleras—Panama’s much-admired national dress worn for traditional events.

When they’re not dancing and socializing, the couple enjoys their laid-back lifestyle in Las Tablas.

“The day starts with Panamanian coffee—usually on the front porch. We have a papaya tree in the backyard and have fresh papaya regularly for breakfast,” Armand reports. “It’s a simple, effortless lifestyle…though the nearby beaches do make it sound a bit glamorous.”

The Brodeurs do most of their traveling by foot, as many of the locals do. And all the walking has had an unintended effect. “We have dropped an incredible amount of weight,” says Armand. “And we’re not even eating as healthy as we ought to.”

For a full report on the comfortable lifestyle a modest budget buys expats on Panama’s Pacific Coast, go here: Retire in Las Tablas, Panama for $1,000 a Month. Also available: InternationalLiving.com’s comprehensive 2015 Global Retirement Index which ranks the best retirement destinations in the world in eight relevant categories, including real estate.

Editor’s Note: Members of the media have full permission to reproduce the articles linked above once credit is given to InternationalLiving.com. Photos are also available.