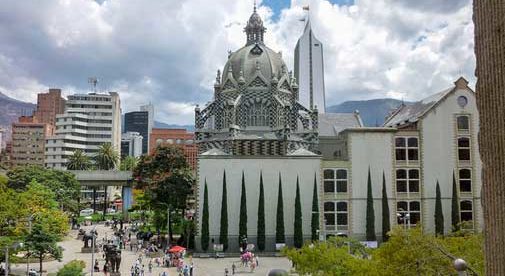 My wife Christie and I had heard some scary stories about Medellín and even watched both series of Narcos on Netflix, leading us to pretty much write off the city as a place to visit, let alone live. But a well-travelled friend of ours said he’d heard some good things and maybe we should have another think.

We set about doing our research and it soon confirmed that we’d been hasty, so we decided it was worth taking a trip and finding out for ourselves what it was really like. The climate helped to seal the deal—Colombia is the second most biodiverse country in the world, meaning you can find whatever climate you desire.

First impressions; we love it. Eternal spring, numerous parks and green spaces, the surrounding hills, the infrastructure and sophistication of a large city, the public art and the selection of food available—have completely turned around our views.

Our research had told us that Colombia was relatively cheap to live in, but we’ve learned those assessments can be subjective—or just plain wrong—so we were wary. It seemed like our fears were confirmed on exiting the airport at Rionegro, about 50 minutes from Medellín, and seeing a sign that indicated a taxi into town would cost $49. We weren’t the sharpest after 14 hours of travel, and it took us some minutes to realize that we were seeing the price in Colombian pesos. The dollar sign threw us, and once we’d worked that out we were more than happy to part with $21 for our own taxi.

We’ve been delighted to discover that Medellín fits our budget. We allow around $75 or so per day for all our expenses and for our first week staying in a hotel we were spending more than that, mostly because of accommodation, in one of the pricier areas of town. Moving into a furnished apartment on a one-month rental ($984 for a 17th floor, brand new apartment in one of the best expat neighborhoods, close to bars and restaurants, with all utilities covered) has given us some options and as we’ve explored the city we’ve discovered that there are plenty of ways to have a great time here on a modest budget.

We enjoy walking; it’s a great way to take in sights, smells, and sounds when there’s no pressure of time. The weather is so good and walking costs nothing. Our day trips have involved journeys of sometimes three or four miles to places of interest; the parks and buildings in the center of town are interesting and refreshing, and we’ve enjoyed a couple of afternoons in art galleries for less than $8.

After all that walking we usually get the metro back. For less than a dollar per journey it’s still a novel and affordable way to get around, as well as being clean and efficient. And as soon as we realized we could take a cable car for a sky-high view for no extra cost, we were on. Our second day here we booked a walking tour with Real City Tours. It’s free—although tips are certainly welcome—and it’s four hours of information and entertainment that’ll give you an excellent boots-on-the-ground view of Medellín.

All that walking deserves a reward and there are plenty of options; cafés, bars, restaurants, bakeries or a stall on the street; they’re all good choices and of course prices vary, but we’ve found excellent coffee for around $0.75 cents and a snack, such as empanadas (stuffed pastry), for even less. As you stroll around parks you’ll often see vendors with trays of drinks such as guarapa a refreshing sweet lime drink, a cooling glass of which will run you just $0.34 cents. The panaderias (bakeries) are hard to resist too—all manner of cakes and biscuits for no more than a couple of dollars.

Most of the restaurant meals we’ve had have generally run to between $15 and $18 for a main with drinks for two people…and have all been very good. The chicken here is always delicious and the ribs are some of the best ever; meaty, tangy, and succulent.

Now that we have an apartment, having a kitchen means we don’t have to eat out all the time, so that saves money and gives us more dietary options. We’re particularly enjoying the different fruits that Colombia has to offer.

While settling into our home can involve significant upfront expense such as rent in advance and a security deposit, flexibility of choice means our daily spending, apart from rent, has dropped to around $34. So, we’re staying well within our budget and no doubt as we get to know the city better we’ll be able to trim that a little more.

You’ll enjoy a low cost of living in Colombia