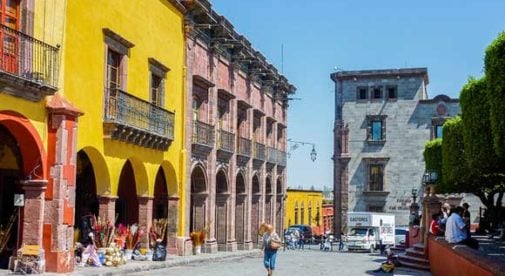 “I have lived in and visited many wonderful places in my life. But only two that were magical to me, where I felt an immediate feeling that I belonged there,” says expat Paula Nunes. “San Francisco in the late 1960s. And San Miguel de Allende in 2012.”

Paula has been in love with San Miguel, an artsy town in Mexico’s Colonial Highlands, ever since she first visited in 2012. The town’s vibrant arts scene, colonial architecture, and temperate climate kept her coming back for years before she moved down permanently last year.

“I love the colors of the colonial centro (center)…the brick, the reds, the yellows…” says Paula. She’d been planning her move to San Miguel, but being laid off gave her the chance to put her plan into action.

“My company laid me off. And I didn’t want to go out and get another job. Even if I had wanted to, because the cost of living in California and the Bay Area is so high, I would have spent most of my money on rent, gas, and other expenses,” says Paula.

Now Paula lives comfortably on the money she brings in working part-time online as a paralegal. The cost of living in Mexico is low already. But the dollar-to-peso exchange rate (nearly 20 pesos to $1 at time of writing) makes her funds stretch even further. “I earn dollars, so I can live very comfortably,” she says.

She has plenty of time for fun, and for the first time in a long while, she can dedicate herself to her art. “Most recently I have worked in pastels. But I also like to paint in acrylics,” says Paula. “Just last week I took a watercolor class.”

She says it’s easy, even as a single person, to find friends and have an active social life. There are dinners out, community groups, get-togethers, and parties.

“Almost every time you go out, you meet people,” she says. “It’s really easy. People give out cards with their name, email, and phone number. I spend a lot of time with people born here, and it’s great. They’re wonderful. I’m trying to learn Spanish, and my Mexican friends are good about correcting me.”

Paula has lived full-time in San Miguel since April 2016. She bought her home—a two-bedroom, two-and-a-half-bathroom house with two covered outdoor terraces— in the neighborhood of Colonia San Rafael, three years ago.

Now folk art and fine art, including some of Paula’s own work, mixes on the walls and shelves. “I collect the work of local artists. There are so many great artists here.”

This year, Paula enclosed and converted her front terrace to a studio. She is also adding a covered rooftop terrace so she can enjoy her surroundings and the views of the Parroquia, San Miguel’s landmark neo-Gothic church, while being shaded from the sun.

With its friendly locals, world-class restaurant and cultural scene, and its low cost of living, San Miguel has been an expat favorite for decades. And Paula doesn’t see herself leaving anytime soon.

“It’s comfortable here. Going out is always like an adventure. When I take a little side street, I always see something new,” says Paula. “I like exploring and trying local family-run restaurants. It’s usually 200 to 300 pesos ($10 to $15), including tip.”