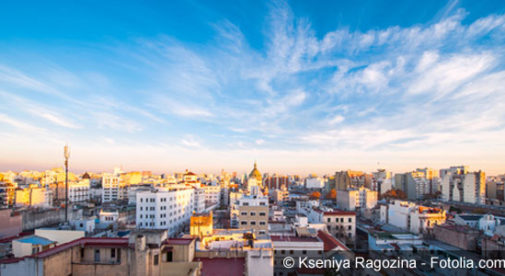 “Wait, what? Don’t move to Argentina, you can’t speak any Spanish!”

Everyone reacted the same way when I announced I was moving. My Spanish education consisted of one class I took for a few months when I was 11 years old. Outside of that I picked up some curse words from South American friends, I knew basics like how to count to 10, and most importantly I could say in Spanish, “I don’t speak Spanish.”

In moving to Argentina, I was going for full language immersion. I’d given up trying to find a regular job and accepted that I couldn’t escape my calling of cultural travel and writing.

I wasn’t going to be alone in Buenos Aires. My boyfriend was from there and I would be living with him and his family while the two of us searched for our own place. Knowing I’d have a native speaker to translate for me, I’d seriously slacked on my plans to study Spanish before leaving.

A layover in Colombia turned into my first crash course. When we landed in Bogota, the plane sat on the tarmac for nearly an hour. Everyone with connecting flights missed them. I’m a professional eavesdropper and like a moth to a flame, I scuttled toward a businessman who was speaking English to a fellow passenger. I was his shadow through the entire process as he negotiated with the airport to get hotel rooms for the night. I tried to go it alone for a minute, then I remembered I didn’t know Spanish so I just smiled and put my faith in the other passengers. Luckily, leaps of faith are my forte.

Since arriving in Buenos Aires nearly five months ago, I would describe full language immersion as a hilarious headache. Some days I can carry on a complex discussion about higher education and other times my mind goes blank and I don’t understand a word.

Months ago when I would go to the store, I’d pray that the cashier would just do the transaction without speaking to me. “Do you want a bag? Do you want it in one payment? Did you find everything ok?” I didn’t know the difference so no matter the question, my answer was going to be, “No, gracias” along with a ridiculous dumbfounded nod.

I took French in high school and Italian in college, but as hard as I tried I could never learn a language just in the classroom. Necessity is the ultimate teacher. When you’re lost on a run in a foreign neighborhood, you will remember how to ask for directions and you will understand the answer.

With practice, humor, and humility I’ve finally learned how to communicate in another language. The confidence that comes with that is priceless.