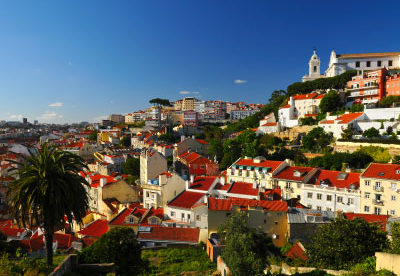 You step from your dining room onto a large balcony. It’s warm out—short-sleeves only—and the sun is dipping behind forest-clad mountains. Cut-stone steps lead down to your cobbled courtyard and from there your split-level garden. Your orchard’s looking good: Lemon, fig, olive, avocado, and cherry trees laden with fruit. Maybe now’s the time to fire up the outdoor bread oven, or take a walk in the forest that forms the boundary of your property.

On the hills, and in the leafy valleys and medieval villages of the Coimbra region of Portugal, you’ll find many old properties for sale. With an asking price of $219,000, the three-bedroom home I describe is actually one of the more expensive properties I came across.

Some of these old houses are very old indeed. I came across another restored property near the town of Arganil that’s reckoned to be around 800 years old. It’s a four-bedroom village home with an orchard selling for $169,000. Fruit trees are a common touch here. The Portuguese are crazy about growing…you’ll find properties for sale with cabbage patches, chicken runs, the odd paddock for a horse… It’s possibly the perfect country for a spot of gentleman homesteading.

If you aren’t green-fingered, every town has a weekly market where fresh, low-cost produce is piled high. (You could live well in Portugal on $1,200 or less a month if you owned your own place.)

Most foreign buyers prefer to pick up old homes with some land within 30 minutes drive of the city of Coimbra. And there are plenty of those on the market. But head into the city and you’ll find decent apartments for sale from as little $70,000 or so. Perfect “lock and leave” bases if you’re exploring Europe. Plus, with thousands of students in Coimbra, there is the opportunity to rent it out.

Two hours from Lisbon by train, Coimbra is Portugal’s version of Oxford. Students clad in black cloaks are a regular sight on the steep cobbled lanes running up to the grand university that dominates the town.

You can spend the afternoon munching roast goat and sipping good wine beside the sedately flowing Mondego river if you own the two-bedroom apartment I came across in the Santa Cruz neighborhood. It’s priced at $115,000. Coimbra is a walkable city, and 20 minutes or less takes you across the river to the Forum cinema where movies are in English. A nice after-dinner stroll. Or catch a fado show—Coimbra is a famous center for this traditional melancholic music.

The cheapest apartment I found was a 775-square-foot one-bedroom in Baixa for $67,000. Very close to the historic center and the river but in need of some sprucing up. For $79,000 you could pick up a two-bedroom near the Se Nova— the “new cathedral.” The newest bit was added in the 18th century. That gives you an idea of how Coimbra feels about tradition.

But, like I say, most foreigners here want the country pad. Here’s a good one: A two-story, two-bedroom farmhouse on an acre of land about 40 minutes north of Coimbra. Set around a courtyard and enclosed by a stone wall, it commands views of the mountains in every direction. There’s a cast-iron log-burning stove and exposed beams inside. You’ll find vines, plum trees, and palms in the garden. You’re less than a two-hour drive to Porto and just over two hours to Lisbon. The Serra de Estrela mountain range are on your doorstep—the highest peaks in Portugal. And the price is $134,000.

The university library is so old you can visit a medieval dungeon in the basement and a colony of bats are used to protect the leatherbound books from insects. When I visited, a very elderly lady was passionately playing a grand piano. She paid no attention to any of the hushed book lovers nearby.