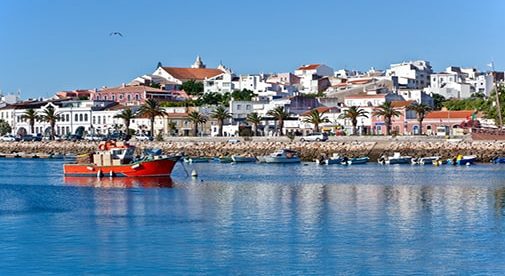 I’m in Lagos, on the western edge of the Algarve, continuing my search for a new base. I’m homeless…rootless…with a couple of suitcases and a husband in tow. I’ve already crossed off Faro and Albufeira. Lagos is more my style, but will it stack up as a more permanent stop?

Mornings here start with a long, high-speed walk. I switch from the oceanside malecon, to the twisting streets of Old Town, to the marina, or to Meia Praia beach. I often head west of town to a beach and cliff walk. A favorite point is Praia do Pinhao, a tiny beach set in a cove.

The first few times I came, there was no beach. It was high tide, and waves were piling up across the open ocean, crashing against the cliffs that back the beach. The noise was terrific, the spectacle one I could watch for hours.

Walk over, it’s back to the office. I think while I walk—mull over issues, organize and collect my thoughts, make decisions. The one this morning wasn’t easy.

I sent Ronan a note, saying we shouldn’t go ahead with a potential real estate deal for Real Estate Trend Alert members.

My decision was based on a number of factors. I’d gone through a mountain of legal paperwork related to the project. The location…the concept—that all worked. But there were some red flags.

The developer had a large credit line with a bank, to cover construction costs. The bank had a lien on the land and any construction on it as part of the arrangement. This is not unusual in the world of pre-construction. But the concerns I had were quite specific.

First, the developer was less than 12 months from finishing the project. He’d already used most of the original credit line and gone back to the bank to bump up the credit available. I’d seen photos of the project. Based on the progress, I didn’t think there was enough money left to finish it, even with the extra money available from the bank. And who knew if the bank would agree to lend even more?

Second, despite the short timeframe to delivery, the developer had only “sold” 22% of the inventory. By sold, I mean buyers had paid 20% down. That’s worrying, when the developer is relying on revenue from sales to pay off the credit line. The developer mentioned a new launch and potential investors, but it just wasn’t concrete enough to make me feel comfortable.

Pre-construction property always carries a risk. The developer might go bust. The project might never get finished. It might not look the way the renders did…cheaper finishes, smaller views.

You need to weigh that risk against the potential reward on the table. With pre-construction, you’re usually paying below market value. (If you’re not, you should walk away.) You need to sit down and calculate if the reward—the lower price you’re paying—is worth the risk you’re taking on.

One way to mitigate the risk is buying from an established developer. You don’t want to go with a greenhorn…only to find his budgets were off, banks don’t want to do business with him, or he’s hired a bunch of incompetents to get permits and build.

Greenhorns tend to pop up in rising markets. When real estate prices start to soar they jump on the bandwagon, reasoning that anyone can make money in a strong market. That’s partly true. But all too often the market softens and, in the words of Warren Buffett, only when the tide goes out do you discover who’s been swimming naked…

Even with an established developer, do your due diligence. Ask about the fundamentals—where the money’s coming from to build, how many sales are in the bag, how many sales are needed to break even. Then dig some more, until you get the answers you need to make you comfortable moving ahead.

If your digging leaves you nervous or worried about debt or lack of sales, move on. There will be other opportunities, ones that will deliver profits with fewer sleepless nights.

Finding the Diamond in the Real Estate Haystack

Get a 50% Discount on a Dream Property