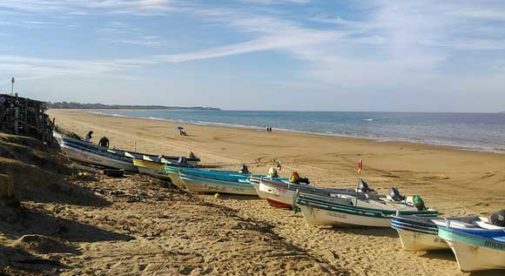 “I think commuting is a waste of time. And I don’t like fluorescent lights or uncomfortable business socks,” says Jon Anderson, who works remotely in the field of IT. “The internet came around when I was first starting my career. But then it exploded and I feel like the bonds between the office and your work aren’t what they used to be.

Almost six years in an RV crisscrossing the U.S. had prepared Jon and wife Jema for a life of travel. And with Jon earning as a “digital nomad”—liaising with clients stateside, over the internet—they were free to live anywhere in the world…

Ready for an overseas adventure—and wanting to expose their kids to life in a different country—they chose the little town of Pedasí, on Panama’s Azuero Peninsula. It’s a traditional fishing and cattle ranching community, with beaches just a five-minute drive away and a small but tight-knit expat community. And, of course, good high-speed internet for Jon’s work.

“We liked that it would be an easy first international experience,” says Jema, who homeschools their kids, writes, and works on her art. “They use the U.S. dollar in Panama. And there’s a big group of expats here. We’ve gotten to know many of the local people. They practice Spanish with us so lovingly.”

Their large four-bedroom home was formerly the town doctor’s house, and costs them $1,200 per month. It’s just on the edge of town. “I’d say our monthly costs are about half of what they are in the U.S.,” says John.

“We can walk everywhere and bicycle to the beach. And there are taxis if we need to go to a larger town,” says Jema, who notes the family didn’t want to have a car.

Jon generally works early in the morning, takes an afternoon break, and then works into the early evening. Having said that, he stays flexible and in charge of his own schedule. And there’s plenty of time for fun activities for the family in the community.

“We’ve gone boogie boarding,” says Jema. “We’ve helped a local biologist release sea turtles. We’ve also gone to Isla Iguana [a nature reserve just offshore and reached by small boats called pangas]. There is a small trail across the island where you can watch frigate birds nest in a protected area. And on the other side of the island is a beach. You just walk in the water and there is a live reef with sea turtles and tropical fish.”

“We’re taking advantage of the local nightlife too. We go to Smiley’s in town for live music and to do some dancing,” says Jon, mentioning one of the most popular hangouts in Pedasi, for gringos and locals alike.

To better enjoy the company of the locals in their new community, the family is taking Spanish classes together. After class, they often go out for lunch at a local restaurant serving up Panamanian dishes. Soup, rice and beans, chicken, and a small salad—the comida del dia—is just $4.50. They practice their Spanish on the waiter, as well as with the lady in the town square selling ice cream for $1.

But one of their favorite things to do is take a taxi out to one of the local beaches, Playa Arenal. There’s a small beach bar/restaurant there where the drinks are cheap and sweeping views rolling Pacific are complimentary.