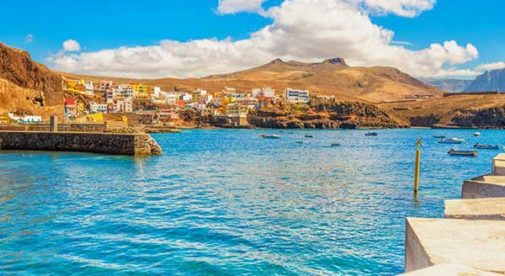 Did you know there is a region of Spain that boasts a subtropical climate?

The summer is long, and the winters are mild. Temperatures rarely rise above 90 F or dip below 60 F any time of year, although there are some microclimates with cooler or warmer weather, depending on factors like slope and elevation. There are more than 300 sunny days each year.

Thanks to the climate, bananas grow abundantly—one of the only places in Europe and source of 60% of the supply on the continent. It also features several volcanoes.

It’s not on the Iberian Peninsula, rather the Canary Islands, set in the Atlantic, about 1,000 miles from mainland Spain, and 67 miles off the west coast of Africa. The islands are on the same latitude as Florida, just north of the Tropic of Cancer.

First colonized in 1402, the Canary Islands were a major stopover for galleons seeking the trade winds that would take them to the New World to pick up gold and silver. But today they draw millions of holidaymakers, lured by cheap flights from Europe and the prospect of fun in the sun. They fill the all-inclusives, buy second homes, or find more low-key spots on the less frequented islands like La Palma, El Hierro, and La Gomera.

Most go to the four other major islands: Tenerife, Fuerteventura, Gran Canaria, and Lanzarote, which are also known for good value real estate.

You can live a quick walk from the water, enjoy ocean views from your terrace—or even your bedroom window—and truly live the beach lifestyle, with resort-style amenities. And you can do it on a budget. 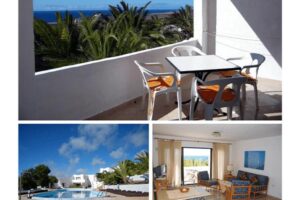 Fuerteventura is the second-largest of the Canary Islands, after Tenerife, with 152 distinct beaches, from white sand to black volcanic, along its shores.

The two-bed, one-bath condo on offer in a resort in the Betancuria municipality. Betancuria town was the original capital of the Kingdom of the Canary Islands, founded in 1404 by invading French knights with backing from the Spanish kingdom. It’s centrally located, allowing convenient access to the island’s amenities.

The resort offers the ultimate peace and quiet as it’s on the less-developed western coast, away from the usual tourism centers (which themselves are much smaller than what can be found on Tenerife or Gran Canaria).

The unit overlooks one of two community pools and beyond that the ocean…and benefits from being on the western slope, which gives it a sunset view. That’s best enjoyed from a private terrace, glass of wine in hand. It comes fully furnished—completely turnkey. 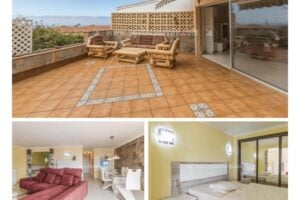 Tenerife is the largest and most populated of the archipelago, with large towns but also quiet villages and rural areas.

The condo, one-bed, one-bath, is located in the hamlet of La Matanza de Acentejo, on the northern shore. It’s marked by pine-covered hillsides running to a cliff-lined shore. There are also wineries here offering tours.

The unit comes complete with a 300-square-foot terrace with views of the Atlantic. The nearest beach, Playa Bolullo, is said to be one of the most stunning on the island. And Santa Cruz de Tenerife, the capital and largest urban area on the island with a half-million people, is about a half-hour drive. 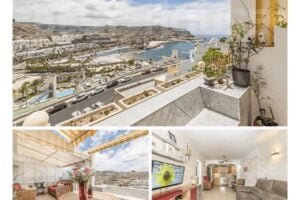 Located southeast of Tenerife and west of Fuerteventura, Gran Canaria has a wide variety of climates and landscapes, from white-sand dunes to green covered ravines in the mountainous interior. Nearly half of the land is under protected status, and a third is a UNESCO Biosphere Reserve.

Visitors come for the long beaches, as well as the vast natural areas. You can lounge by the water, go hiking, go sailing, or enjoy the restaurant scene and shop in places like Las Palmas and Mogán.

A two-bed, two-bath condo, recently renovated, with a 200-square-foot terrace features views of popular Playa del Cura on the south of the island. The complex has five pools, tennis and squash courts, restaurants, and a supermarket.

An Unmissable Deal on Portugal’s Algarve