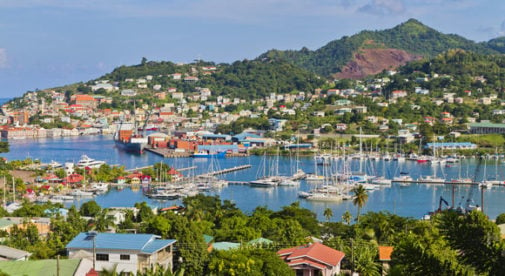 If, like me, you’re hooked on the ocean and the laidback vibe of the Caribbean, you may also dream of living there… But, driven by the tourism industry, rising prices mean that many people feel a slice of paradise could be beyond their budget.

Let me introduce you to Grenada, where my husband Michael and I were lucky enough to spend one month last year. (And we intend to go back soon.)

We’ve visited many Caribbean islands, but in Grenada we found a true gem that combines terrific beaches and weather with an affordable cost of living and reasonably priced real estate.

Unlike Barbados, Grenada’s beaches aren’t crowded with big-box stores or mega hotels. The island’s resorts lean more to the smaller boutique style; even the exceptions have fewer than 230 rooms.

Eclipsed by the stunning piton peaks of St. Lucia, the ever-popular Barbados, and the sister islands of Trinidad and Tobago, Grenada is a little-known gem, a sovereign nation comprising six islands, with Grenada itself being the largest and most populous. The islands cover only 133 square miles, and the whole nation has a population of around 110,000.

But this tiny island nation is not without diversity. Locals claim African, East Indian, and European descent, owing to its French and British colonial heritage. (It’s officially English-speaking, although listening to the rapid-fire local Creole will make you wonder.)

Average temperatures range between 75 F and 87 F. There are direct flights to JFK and Miami, as well as to Europe and throughout the Caribbean. You’ll find an established expat community, most of whose members hail from the U.K., with a growing number of North Americans.

Real estate is surprisingly affordable. For $700 a month you can rent a one-bedroom apartment a short walk from the soft white sands of the island’s most famous beach, Grand Anse. Regular snowbird visitors are often able to find long-term beachside apartments for only $600 a month (ask your taxi driver; his uncle, cousin, or friend will have a rental).

Compare these prices to similar properties close to the beach on neighboring Caribbean islands… In nearby St. Lucia, for instance, a one-bedroom townhouse in Rodney Bay, without a sea view, rents for $1,685 a month. A three-bedroom home with a partial sea view in the Gros Islet area costs $2,809. Long-term rentals in better-known St. Thomas, in the U.S. Virgin Islands, start at $1,600 for a one-bedroom condo with a view—and climb from there.

Grenada has a friendly, small-town feel, yet it also has all the amenities you need. The island’s biggest supermarkets are in the Grand Anse area, where you can find—at a premium—many familiar brands. Eat local-style and your costs are lower. Fresh, locally reared chicken breast is only $2.50 a pound. Onions, potatoes, mangoes, and tomatoes are 50 cents to $2 a pound and rice is 50 cents a pound.

Overview of The Caribbean Islands