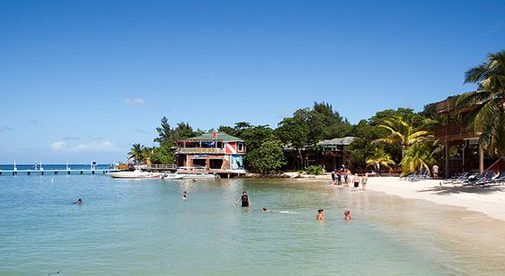 Roatan is one of the most affordable and idyllic Caribbean islands and home to a large expat community.

“We always planned to retire on an island,” says Angela Szuch about her and husband Mike’s decision to move to Roatan, Honduras…

“We started visiting about 20 years ago to dive.” Known for its clear waters and reefs, Roatan is a divers paradise.

“Mike and I moved with our son at the end of 2017. Now at college in the U.S., he completed his last year of high school online while living in Roatan,” says Angela.

After a year in the more developed West End of the island, the couple moved to the quieter eastern part and bought a house.

“It’s an octagonal house on stilts, an island-style home. It’s on a hill just five minutes from the beach with two bedrooms, two bathrooms, big kitchen and living area with mahogany floors. We have a big porch, a swimming pool, and garden and we paid just $160,000,” says Angela. “The cross breeze keeps the home cool enough that we don’t need to pay for air conditioning.”

It’s not just property that comes at bargain prices on Roatan. “We spend a quarter of what we spent in New Jersey,” says Angelica.

“We like to cook. The food is healthier and fresher. I’ve lost 30 pounds. It’s also very inexpensive. For 80 cents I can get a bag of fruit. Now, when I go back to the States, everything tastes like it has a lot of sugar in it.”

The former IT professional and her electrician husband have settled into island life. “We’ve joined the local chapter of the Rotary Club. One recent project was raising money to build bathrooms in some of the local schools.”

They also tend their garden, go to the beach, and socialize. “There’s a sizeable expat community here. Yesterday, there was a soft opening for a new brewery so of course we had to go and sample the wares,” Angela jokes.

Of course, there are more traditional events too like Honduras’s Independence Day. “On September 15, the tradition is to run a torch from one end of the island to the other. The school kids get all dressed up, march and perform dances.”

There are several restaurants close by too. Cal’s Temporary Cantina has a live band and offers a mix of island food and American-style food—pork chops, fish, burgers, wings, all with a view of the ocean. (In the local eateries you can have a fresh meal for two with beers for around $10.

Angela and Mike love their new lives. “The biggest adjustment is adapting to island time and realizing that manana means not today. But I don’t mind the slower pace. It’s part of the charm.”

If you’re thinking of making your move abroad, Angela has this advice: “It’s easier than you think. Make a plan, execute and go. And there’s no reason to wait until your kid is out of school or you retire. There’s online schooling available like we used, and plenty of people work remotely. Jobs are more portable nowadays.”

The 3 Best Islands For A Caribbean Dream Home

A Caribbean Ocean-Front Home For $189,500 In Roatán, Honduras

The Number One Tip For Buying Overseas The Right Way