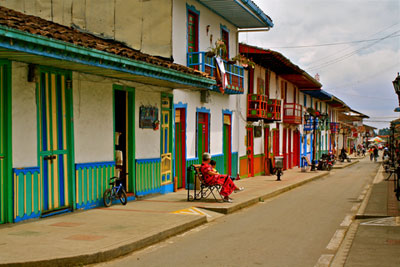 The most visited town in Colombia's Coffee Country, Salento is just one of its colonial gems.

There are colonial-style homes all over Colombia. Some are centuries old, while others date back to the late 19th or early 20th centuries. It’s common to find bargain-priced, fixer-upper, colonial-style homes in small communities—some for $50,000 or less. There’s a simple reason for this: Many Colombians believe that anything old is unfashionable and that new things are better.

Many Colombian colonials are bahareque, a type of construction in which bamboo or wood slats are covered with an adobe-like mixture of mud and straw and then painted. This building method dates back to pre-Columbian times. The flexibility of the material and the warmth it provides is ideal for the climate and terrain. Roofs are constructed of guadua, a type of bamboo, and clay Spanish tiles. Floors are made of guadua bamboo covered with wooden planks. Guadua grows along rivers and streams throughout the country, so it’s a readily-available building material.

Salento, the oldest town in Colombia’s Coffee Triangle, was founded in the early 1840s, a couple of decades after Colombia’s independence from Spain. Here builders continued to construct colonial-style homes into the early 20th century. Most Salento homes were built using bahareque building methods. As a result, it’s the region’s prettiest and most-visited town.

Several expats have bought and restored colonials in Salento. Hemmo Misker bought a two-story, seven-bedroom home for $56,000 in 2010 and spent $80,000 on renovations. When he discovered Salento, he knew he’d found his paradise.

The area is loaded with opportunities for motorcycling and hiking—activities Hemmo loves—so he decided to put down roots.

The same Colombian family had lived in the house for decades. But old age and mounting repair costs forced the current generation to put it on the market. “When I bought the house, its condition was about a three or four on a scale of 10, so it needed a lot of work,” Hemmo says.

Floorboards, ceiling panels, and some balcony railings and wall studs needed replacing. He also added more bathrooms and embedded electrical wiring inside the walls. For the roof Hemmo bought second-hand Spanish tiles that were in good condition—allowing him to maintain the home’s original look. With the help of a contractor, Hemmo completed most of the restoration in just a few months. The openness of the colonial design feeds his love of nature, blurring the lines between indoor and outdoor living.

Salento’s oldest backpacker hostel, The Plantation House, is a long, colonial-style farmhouse with a porch running its entire length. Englishman Tim Harbour opened it for business in 2004. Surrounded by a veritable Garden of Eden, the property has incredible views of coffee farms and the valley below.

Although The Plantation House has undergone a full renovation, with modern wiring and plumbing and a host of cosmetic improvements, it still has the charm of a traditional Colombian farmhouse. Wide wooden planks stretch across interior and exterior floors. Traditional clay tiles adorn the roof. Bedroom windows open to lush gardens, where hummingbirds and butterflies make their home. Orchids hang between columns, an old hat rests on a peg beside a door, and wooden and wicker furniture forms an outdoor living room in a corner of the veranda.

When restoring an old home, patience is your greatest asset. It’s often hard to find craftsmen who know how to renovate a bahareque home. And some contractors claim expertise that they don’t really have. Take your time to find the right person for the job. Likewise, it can take time to source the right building materials.

An alternative is contemporary homes completed in a colonial style.Towns with historic buildings typically have craftsmen who can create colonial-style doors, windows, shutters, and decorative moldings. A contractor can build your home using conventional materials for the foundation, walls, wiring, and plumbing, and craftsmen can provide the fine details that will make it a contemporary classic. It’s the best of both worlds—a conventional home that won’t cost a lot to maintain, with the elegance of times gone by.

Internet home listings are only a recent thing in Colombia. While some properties on the market aren’t advertised online or in a newspaper, most have signs outside with real-estate agent contact information. It’s a good idea to seek out expats and pick their brains.

“Some of the old buildings in Salento were destroyed in the past, due to lax code enforcement. But now, town leaders want to maintain the original houses, to protect them,” says Hemmo.