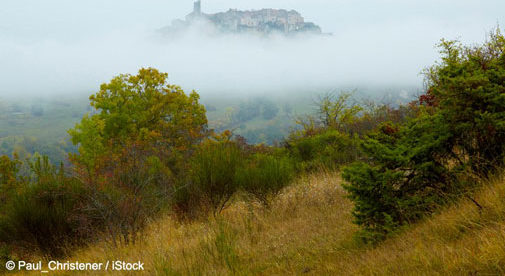 Cordes-sur-Ciel appears to float in the clouds during spring and fall.

The village of Cordes-sur-Ciel in the south of France has a name that means “Rocky Heights in the Sky.” It earns that name from how it appears in spring and fall. At these times of year, a seasonal mist fills the valley below the village, giving it the impression of floating on a blanket of soft cotton.

Randy and Anne Giarraputo from New Orleans decided they wanted to walk in these clouds, and moved to Cordes-sur-Ciel in 2011. They have been enjoying the hilltop village’s charms ever since.

“We thought of retiring to either France or Italy,” says Randy. “France won out because of my wife’s background in teaching French, and the fact that she spent her junior year abroad in Strasbourg and another year working on her Masters at the Sorbonne in Paris.”

After 23 years as teachers in Louisiana, Randy and Anne took the leap and moved overseas to start a new chapter. They first lived in French-speaking Morocco for five years, and then moved to Cordes-sur-Ciel.

“Since we have lived in France, we’ve probably only had our morning coffee in our house fewer than 20 or 30 times,” Randy says. “We start the day off by walking to the café to have our two coffees, read the newspaper, and engage with the people we’ve come to know there.”

The small population of Cordes-sur-Ciel makes it easy to meet the locals and chat with friends. Founded in 1222, this village in the clouds is home to roughly 1,000 people, depending upon the time of year.

The stone houses lining the streets are particularly charming. Randy and Anne bought their home outright. They own a three-bedroom, two-bathroom stone house built around 1900.

“The area is surrounded by 125 vineyards to the south, and farms raising crops and animals to the west, north, and east,” says Randy.

Cordes-sur-Ciel is only about 50 miles from the city of Toulouse. For Randy and Anne, proximity to Toulouse’s international airport, medical infrastructure, and amenities are a key advantage.

“We own our car and use that for transportation,” says Randy. “There is a bus to two larger towns about 15 miles away. The train station is three miles away. From there, you can take a train to Toulouse, and then to any place in Europe.”

While the transportation links make it easy to explore the region and beyond, there are also plenty of local activities to keep them busy. The summer is an especially exciting time to be in Cordes-sur-Ciel.

Indeed, Cordes-sur-Ciel offers attractions all year round. After living in warmer climates for many years, Randy and Anne have embraced all four seasons in their new home.

“During the fall, after the harvest in September and October, the vines turn wonderful colors of yellow, orange, and red,” says Randy.

In addition to outdoor activities, Randy and Anne also practice the culinary arts. While they enjoy most of their meals at home, they do occasionally take advantage of the reasonably-priced restaurants in the area.

“We have found the cost of living to be lower than that in the U.S.,” says Randy. “Where can you have a three-course meal with wine for less than $15 a person, including tip?”

With an affordable cost-of-living, a pleasant climate, and plenty of activities to pursue, it is easy to see why Randy and Anne are walking in the clouds in Cordes-sur-Ciel.

5 Wine Locations Where Life Gets Better with Age for Expats

5 Reasons Why You Should Retire in France