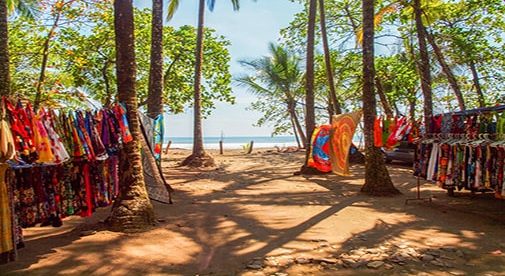 Dominical has the perfect micro-climate for Jennifer, with temperatures typically in the 80s F.

Over the years, Jennifer Pikor had spent time in many different places, including England, France, Holland, Belgium, Spain, Italy, Germany, Austria, Denmark, Sweden, Norway, Australia, New Zealand, China, South Korea, and South Africa. However, when it came time to make a decision about where she would call home outside the U.S., she went with the Pacific coast of Costa Rica.

Her reason was simple: “I love hot weather.”

For a sunshine connoisseur, Costa Rica is a dream. As small as the country is, there are differences in the average temperatures between areas in the drier Guanacaste province on the northern Pacific coast, and those along the southern Pacific coast. Spending some time in the country helped Jennifer decide on moving to Dominical, a beachfront town just south of the Costa Rica’s capital, San José.

“I researched areas for average weather temperatures to find a microclimate that was just a bit cooler. Dominical is typically in the 80s F, which is perfect for me.”

An area of Central America where jungle-covered hills meet the Pacific Ocean, the southern Pacific coast region is popular with everyone from surfers to those who prefer to watch the ocean from an infinity pool on a hillside. For Jennifer, the area’s culture added to the appeal. “One of the biggest differences culturally is that there isn’t the corporate America rat-race mentality. It’s a very refreshing feeling, and a lot less stressful, since there isn’t pressure to conform to that lifestyle.”

While many of Jennifer’s new neighbors are people who waited until they’d retired from their jobs in the U.S. or Canada before moving overseas, she opted to do it while still working. In fact, since her move, she has developed and launched a social media app, ShowDat, in coordination with Proximity Costa Rica, a software company in San José. The name is an abbreviated form of “Show the Data.”

“The app provides a fast and easy way for anyone to conduct their own market research, whether it be personal or professional,” says Jennifer. In a nutshell, users can create multiple-choice questions using a series of images, and their connections vote on the answer they like the best. The app calculates the percentage of votes in real time, allowing the user to see which answer is most popular.

Two lovable dogs, Lacy and Evie (half Havanese, half Cavalier King Charles), moved with Jennifer, and cheerfully keep her company, whether she’s working on her business or playing in the new climate.

“I really love being able to freely pursue and execute ideas that I come up with, without all the red tape and roadblocks that come with being at a corporate office. When your creativity is untethered, you can accomplish quite a bit.”

Jennifer says that in general, the cost of living in Costa Rica is lower than what she was paying in Boston. “Rent in particular is significantly less, and some services (dog grooming, massages) cost less as well.” However, she says there are a few costs to watch out for, including imported food. Eating locally sourced food is much more economical and healthier too.

“For someone who is considering making the move here, I think you could make a pretty good life for $1,500, to cover your standard monthly living expenses, with additional money for activities and so forth. Rent does have a pretty wide range of options depending on your budget. You can rent a place for as little as $200 per month, or as much as $2,000,” says Jennifer.

Because she runs her own business, she also can enjoy a certain amount of flexibility in her life overseas. “Although I don’t have set hours, I typically work from Monday through Saturday. However, owning my own company does give me the flexibility to work in fun activities during the week, such as taking Spanish lessons.” Or heading outside with Lacy and Evie to take in the day.

Writers Find Inspiration And The Right Cost Of Living In Tamarindo

Afraid Of Heights? This Off-Grid Business Isn’t For You