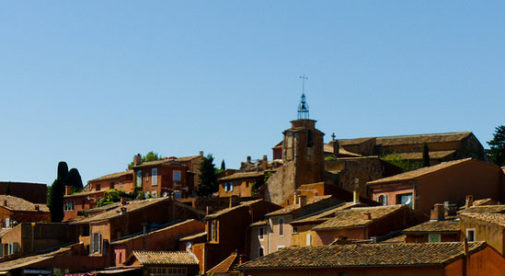 Exploring the villages of Le Luberon, France, and beyond, it’s hard to ignore the overwhelming sense that the French have it all figured out. Here is my evidence:

In Bonnieux a visit to the Musée de la Boulangerie (Bread Museum), followed by a flawlessly executed warm baguette snack perched on a wall overlooking the valley floor, was the perfect way to start the day.

After a slow walk through Goult for a late morning cafe au lait at Cafe de la Poste, my family and I felt like locals. Goult, despite being a stunning ancient hilltop village, is not very popular among the tourists. They’re missing out because it was truly one of our favorite villages to see.

It’s not the only pretty village around though. Gordes, a 15-minute drive from Goult, is officially one of Les Plus Beaux Villages de France—The Most Beautiful Villages in France—an honor given to it by an independent association that lists the best and most heritage-filled villages in France. It is always hard for something to deliver when it has that reputation, but Gordes does not disappoint.

Gordes was a hive of activity from the early hour that we visited on a Sunday. Families strolled near the imposing castle wall after church; mud-splattered mountain-bike riders took their morning coffee after a vigorous ride through the hills; couples that had been together for decades wandered arm-in-arm in their Sunday best.

Next, it was on to Roussillon, a small town that’s bathed in Technicolor light. Every hour that we spent exploring the ochre cliffs revealed a different shade and shadow of this majestic village. The color is repeated in the homes and businesses in this village, each painted a cheerful, bright shade.

Two other villages that I recommend checking out are Fontaine de Vaucluse and Les Baux. Both are dramatically beautiful.

Les Baux took our breath away. A medieval castle crowns the village—the siege machinery and cross bow demonstrations there were a huge hit with our kids—and the backdrop to the castle is a view that has inspired countless artists over the years.

The village of Les Baux also offers great food. We picked up tapenade and red pepper from its bustling market to eat as lunch when we arrived in Fontaine de Vacluse.

We were in Fontaine de Vacluse partly to see the river that gushes up from the Plateau and carves its way through town—a gorgeous site. But, on a Thursday in March, we could not find parking in this popular gem. What we did find was a spot downstream where school children were lounging with their families for an afternoon picnic. There we spread our blanket by the river and dined on our purchases from Les Baux—feeling very much like locals and glad that we had explored this wonderful region of Provence…