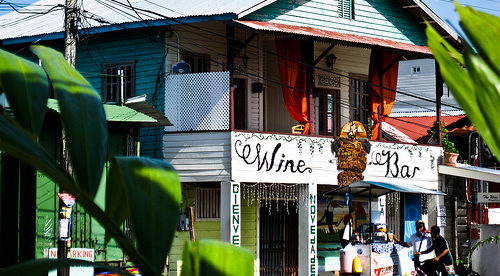 Great festivals, food and fun are part of the reason Jessica loves living in Panama.

The saying is used when the strong, bright sunshine and the crystal blue of a nearly cloudless sky makes you wish you were on the sand, in nothing but your swimwear.

I step outside onto a green lawn lined with palm trees. Now that the sun is gone, all I feel is the cool January summer breeze. It’s nearly 7.00 p.m. and, though the sky over the Panama Canal is still tinged with a low burning orange, I can see stars peeking out from amongst the palm fronds above me.

I’m in the City of Knowledge, a large “technopark” in Panama’s capital. It’s much like a business park, but the offices here mostly belong to NGOs and educational institutions. This is a place for innovation and forward thinking…and its small theater is the venue for this year’s Panama Jazz Festival.

This and other great festivals are part of the reason I love living in Panama. Despite the country’s tiny size, it has everything to offer. And I’ve enjoyed watching the offerings grow since I moved here permanently in 2005.

The Jazz Festival started out small 10 years ago, but now there are classes and scholarships for kids, and concerts boasting the likes of Herbie Hancock. Since the jazzfest’s early days, the art scene here has exploded.

I went to dozens of events last year…including Panama’s first ever International Film Festival, an Evanescence concert (I missed Elton John in February), and a Gauguin exhibit (few people know the famed painter once sojourned in Panama).

And there were more events I missed. An Arctic Photography expo at the Panama Canal Museum…Flamenco in colonial Casco Viejo…a body art exhibit in funky gallery/boutique Diablo Rosso…open mic nights at a tiny “hidden” bar called Rayuela…and so much more.

And on every corner, in every part of town, the food scene is better than ever before. Whether I want local fare, Indian, Italian, Lebanese, Japanese, Peruvian, or Swiss…you name it…I can always satisfy my cravings.

It’s not just Panama City that’s growing. When I leave town—I like to go exploring as often as I can—I always make new discoveries. A hidden beach bar in Caribbean Bocas del Toro that’s “tattooed” with local art…an island that housed an Alcatraz-like prison and is now known as Central America’s best diving destination…or a thoroughbred racing horse farm in the Highlands near Boquete.

Panama is growing into a little powerhouse. It has the region’s fastest growing economy…the best Internet connectivity…and the largest Duty Free Zone in the Americas. But it’s still a developing country, which is exciting. I love seeing what each new year brings.

And the latest buzz on the grapevine? In the near future, artificial islands will offer luxury housing in the Panama Bay. And a statue is to be built this year, commemorating the “discovery” 500 years ago of the Pacific Ocean. Panama’s president says it will be taller than the Statue of Liberty.

What else will the future bring? I don’t know exactly…and I’m glad. Surprise me, Panama! You always do…

Panama City: A World-Class Destination to Suit Any City-Lover’s Budget

Why Consider Living, Buying, or Investing in Panama?