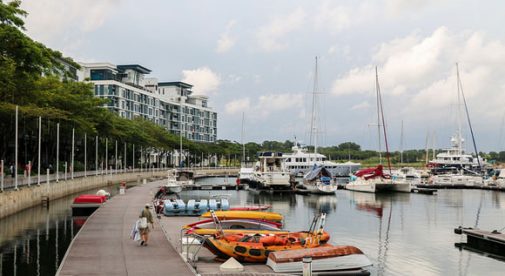 Randy and Swelaine Bartley moved to Johor Bahru in 2013, with an eye to opening a business. The couple had never been to Malaysia before, but they heard through the grapevine that there were opportunities for expat business there. At the time, 68-year-old Randy had already retired, but Swelaine was certain that she was not quite ready for retired life.

With Johor Bahru’s warm tropical climate, it didn’t take long for Swelaine to determine a shaved ice restaurant would do well here. She opened the doors to Big Bowl Ice in the city center in December 2013. According to Randy, “We had no business model, no plan, and no idea how we were going to do this, but it’s what Swelaine wanted to do.”

Swelaine and Randy say they had no difficulty getting approved for permanent residency through the Malaysia My Second Home Program. Within a few weeks of arriving, they had moved into their spacious three-bedroom apartment just north of the city center.

Swelaine spends her days at the business, helping her staff serve up icy treats during the busy afternoons. Randy prefers to spend his days at the huge swimming pool in his apartment complex. Once the neighborhood kids leave for school in the mornings, he says that he has the pool all to himself, just the way he likes it.

Their budget runs to about $2,000 per month, and that includes their apartment rent, all utilities, food, medical care, and driving and maintaining their automobile. Almost all of that is paid for from the income they earn through their business. They estimate that it will take about five years to totally recoup their investment. “After five years,” says Swelaine. “Our investment will be totally paid for and we will have lived here for free. Everything is so much cheaper here than back home. The people here speak my language, which is a big plus, too.”

When they’re able to get away for a few days, they explore the nearby sights. Randy enjoys diving at beautiful Tioman Island, and they’ve taken a few trips to the sleepy fishing town of Mersing. Their next adventure will be spending a short holiday in the city of Kota Kinabalu on the island of Borneo.

Of course, their new home town is not without its charms. Johor Bahru has an excellent restaurant scene, and the Bartley’s enjoy the occasional splurge at a fine restaurant. “At the more upscale restaurants in Johor Bahru, we spend about $50 for dinner, and that includes drinks. Our favorite restaurant is the Bierhaus, and there is also a good Italian restaurant called Rosmarino near where we live. It’s incredibly cheap for what you get,” says Swelaine. They also enjoy attending the monthly get-togethers hosted by The Expat Group, where they can mingle with other expats and make friends.

The healthcare in Malaysia is such good value that neither of them has seen any need to buy health insurance. Randy says, “It’s actually cheaper to just pay as you go, and insurance is not worth it. Our expat friends who live here feel the same way.”
Although this isn’t the laidback retirement that Randy had once envisioned, he finds that the lifestyle agrees with him, and Swelaine is thrilled to realize her dream of being a business owner. “For me, owning my own company is what makes this home. I’m happy to be here.”