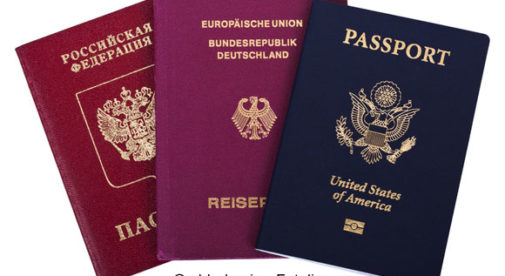 Benjamin Franklin—one of the most astute and beloved of America’s Founding Fathers—once observed: “Where liberty dwells, there is my country.”

Whether the people of the United States have remained true to the intent of America’s Founding Fathers is certainly open to question. Since the terror attacks on September 11, 2001, Americans have been subjected to the questionable Patriot Act, massive government NSA surveillance, and a flood of restrictive and questionable laws that curb liberties.

It is one thing to defend against possible threats to national security; quite another for a government to presume that everyone is guilty of something and must be treated like suspects…but that is America today.
Some of these post-9-11 restrictions have been aimed at the ability to travel internationally, a right guaranteed in the United Nations Declaration of Human Rights.

Most Americans think they are entitled to a U.S. passport as a matter of right. But every passport states: “U.S. Government Property.” It says: “Upon demand made by any authorized representative of the U.S. Government, it must be surrendered.”

Under several federal laws, the U.S. State Department can refuse to issue or renew a passport for reasons ranging from an outstanding federal arrest warrant, to an existing debt of $5,000 or more in delinquent child support payments.

In 2012, U.S. Senator Barbara Boxer (D-CA) managed to get a provision adopted in the Senate that would have denied or revoked a U.S. passport if the U.S. Internal Revenue Service claimed the person owed $50,000 or more in delinquent taxes. You can bet the IRS could easily trump up a phony tax bill to block travel.

Although in 2012 this travel restriction was killed in the House, only last month this same anti-travel provision was slipped into another Senate bill and, thankfully, again killed in the House. It seems many in government want to keep Americans at home where they can be controlled.

This is yet another reason why acquiring a second passport is so important today.

That is in addition to the increased freedom of movement you’ll enjoy in countries that might otherwise have required you to apply for a visa; if, for example, you qualify for a second passport from any of the 28 EU states, the whole of Europe opens up to you. Because of EU law, you’ll be able to travel freely through all member states, without the hassles, expense, or restrictions of acquiring tourist or residence visas. You’ll also be conferred with all the rights of an EU citizen—including the right to open businesses, buy property, and work in the EU.

Should you decide to go one further and renounce your U.S. citizenship, you will also be free to escape rising taxes in the U.S. (A second passport is the first step in acquiring a new citizenship leading to ending U.S. status and ending U.S. taxes.) Renouncing citizenship is not as rare an event as it once was.

In the first three months of 2014, 1,001 U.S. citizens formally renounced their U.S. citizenship, a number higher than in any full year before 2009. At this current rate, the total number of formal renunciations in 2014 will exceed 4,000, which tops by a thousand the previous record year of 2013.

My advice for Americans considering a second passport is to act now, while you still can. My new edition of The Passport Book tells you exactly how you can do this. You can secure your copy here to help you start planning your escape route now.