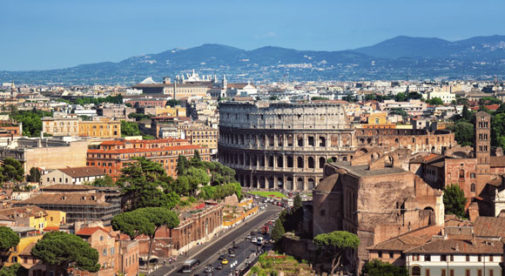 Rome…3,000 years of culture, good food, and an appreciation of the finer things in life packed into one city…

Today’s Rome still bursts with excitement, romance, and a cosmopolitan atmosphere, making it a great choice for retirees who appreciate convenience along with good food, great wine, and history.

One expat who’s fallen under Rome’s spell is Sari Gilbert. She fell in love with Italy as a teenager, and years later, she made The Eternal City her home.

Just what lured Sari away from the U.S.?

“Well, it was a mixture of things,” says Sari. “On the one hand, I was drawn by the beauty of the country and the monuments. I always found the buildings of the Renaissance and even the Middle Ages totally fascinating and uplifting. And, of course, Italy is a place where people take great pleasure in nature and in the things nature offers: food and drink.”

She got to Italy a little differently than most people do. Initially, Sari moved to Italy to work as a journalist. She worked for U.S. newspapers, but when it came time to retire, Sari couldn’t see herself moving.

Though Rome is, more expensive than other Italian destinations it’s more affordable than you might think. For example, things like massages are cheap and Sari says she indulges herself with one every week.

Good-value real estate exists, too. For instance, you can find a two-bedroom apartment of 700 square feet in the historic center of town—near galleries, the medieval St. Clement Basilica, and two large, public parks—for €118,000 ($134,000).

You’ll also find good, affordable rentals in the same area, like a one-bedroom apartment in a restored historic building with a doorman for €900 ($1,020) a month. It’s in easy distance to restaurants, galleries, and shopping.

You have a host of dining choices in Rome, from traditional pizza restaurants to Michelin-starred eateries. Options can range from $10 into the hundreds—whatever your taste and budget.

If you become a resident like Sari, you’ll have access to the national health service, a big cost saving. Sari reports, “While these days there are co-payments for some procedures, the cost is still very reasonable and much less than in the U.S.”

Though Rome today is a bustling city, Sari says, “There’s no doubt that life is more easygoing in Italy than it is at home… Italians always seem ready to take time out for a chat, a coffee, a drink, and a laugh.” There is a cafe just downstairs from her apartment where she enjoys flipping through the day’s newspaper and chatting with the barista and other locals.

Though officially retired, Sari remains very active. She still writes and has even published a book.

And for relaxation, she enjoys meeting and making friends at the evening aperitivo where everyone enjoys a small snack and conversation. She has season tickets to the symphony. After all, where better to enjoy the symphony than Rome?