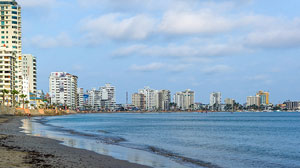 Salinas is one of the world's most inexpensive beach resorts.

Ecuador has an abundance of restaurants offering cuisine from around the world. Here, our guys on the ground give you their friendly recommendations of five of the best places to eat in Ecuador.

Quito has been described as the most beautiful large city in South America. The Spanish had great influence here and this is reflected in the city’s colonial architecture. Restaurants in Quito are plentiful and good value.

Quito’s better restaurants are in the newer part of the city, in the area known as La Floresta, and in the Mariscal tourist district. La Mariscal is where you can find Quito’s best ethnic restaurants.

IL’s Ecuador Editor, Suzan Haskins moved to Ecuador in 2001 with her husband Dan. She says, “Being able to pop into one of my favorite restaurants is one of the things I enjoy most about visiting Quito.”

In La Mariscal neighborhood, you’ll find a little hole-in-the-wall restaurant that serves authentic Indian fare. “Called Chandani Tandoori, you’ll need to look beyond the atmosphere (none) and focus instead on the food… dal, tikka korma, curries, and more. And nothing on the menu costs much more than $5,” Suzan says. It is located at Juan Leon Mera No1312 y Luis Cordero.

Another favorite of Suzan’s is Cosa Nostra. An authentic Italian trattoria and pizzeria, they sell house wine by the carafe and half carafe. Suzan says, “The pizza is so good I’ve never been able to bring myself to order anything else… beside the tiramisu, that is.  If you like mushrooms, try the pizza norcina, with a sauce of black truffles imported from Italy. It’s simply the best.” You’ll find Cosa Nostra at Baquerizo Moreno E7-86 y Almagro.

At the western-most point of the country lies the town of Salinas, Ecuador’s largest coastal resort. The town has a permanent population of less than 50,000 but it swells to over 100,000 on holidays when condos, rentals, and hotel rooms are filled to capacity.

Despite the flurry of activity, it may be one of the world’s least-expensive beach resorts. A steak or seafood dinner in one of the trendy restaurants will set you back just $5 or $6. Or chow down on fish or shrimp, at the local Mercado–more than you can eat for about $2.50.

Cuenca is famous for its distinctive food among other things such as its colorful festivals and breath-taking scenery.

IL’s Cuenca Correspondent, Edd Staton, moved to Cuenca three years ago. He says, “I must admit I am not a huge fan of Ecuadorian cuisine in the highlands where I reside. While coastal food has a bit of zip I find the offerings here in the mountains too bland and overly salted. My two favorite restaurants in Cuenca feature the dishes of neighboring South American countries.”

You can get a great lunch in Moliendo Café. The owners (Honorato Vasquez and Hermano Miguel) have been serving up delicious and inexpensive Colombian cuisine for over 12 years. “Their daily almuerzo (fixed price lunch) includes homemade soup, a basket of bananas (traditionally you slice them into the soup but we save them for dessert), fresh squeezed juice, a choice of beef, chicken, or pork, plus rice and vegetables. All for $2.75 each! When leaving, we always ring the bell at the front door to say we enjoyed the meal and great service,” Edd says.

For dinner, La Esquina is Edd’s choice for high-end dining. This restaurant has two locations, Juan Jaramillo and Borrero & Milenium Plaza. Amazing house specialties from Argentina are served in cast iron circular dishes called “discos.” The chicken in a creamy mustard sauce and the beef with cabernet reduction and wild mushrooms, both including roasted potatoes in the dish and a generous side salad, are truly decadent. Edd says, “The portion for two ($18-$24) is so generous we always take home ample leftovers.”

Salinas, Ecuador: Everything You Need to Know