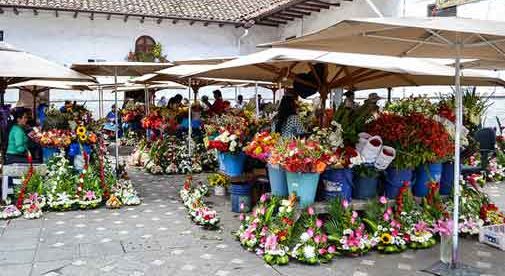 My partner, Stacey, and I have lived in Cuenca for almost three years, and we have learned that some of the busiest and happiest moments of the entire year come towards its end. And best of all, the joy has a great price point: completely free.

First on the list is the celebration of Cuenca’s independence from Spain, which is officially commemorated on November 3. This is the biggest event in town, aside from the annual Christmas parade, and draws thousands of visitors from Ecuador and other countries.

Events start in mid-October and run through the end of November. There are civic and military parades; concerts of traditional, classical and modern music; dance contests and performances; food fairs with plenty of cheese, chocolate, and wine; and the biggest draw of all—the artisan markets.

Tents are set up all over town, especially along the Tomebamba River, where it’s easy to stroll. The market features a dazzling array of handcrafted items from local and regional artists. Fine jewelry, ceramics, textiles, furniture, and home décor are just a few of the treasures you can head home with. But be sure to make your hotel reservations early.

In December, the city is illuminated with hundreds of thousands of lights, including fishing scenes in the middle of the Tomebamba River and a larger-than-life interpretation of the Christmas nativity with every familiar character (including the stable animals) covered in reflective fabrics and lights.

The highlight of the holiday season is the Pase del Niño parade on Christmas Eve—an eclectic mix of Catholic and indigenous traditions. The parade is eight hours of floats and decorated cars, adorned with mixes of fruit, dolls, empty liquor bottles, and roasted pigs, not to mention live versions of the Virgin Mary and Baby Jesus, accompanied by motorcycles, clowns, and flame-eaters.

The Spanish introduced the Pase del Niño to Cuenca almost 500 years ago as a Christmas celebration in which a likeness of the infant Jesus is carried through town. The Cuenca parade, recognized as one of the largest in Latin America, is part of a three-month collection of neighborhood parades that begin the first Sunday after Advent and continue until Carnaval in March.

New Year’s Eve is filled with the burning of monigotes, which are basically large, paper-filled dolls. You simply choose your monigote’s body and then outfit it with a mask—anything from superheroes to animals to politicians or maybe even a replica of you.

The idea is to let go of anything bad that happened in the past year and then welcome the hope of the coming year through setting fire to the effigy. People often write notes and stuff them in the monigote to burn, along with small fireworks. The dolls can represent individual or family wishes, and a bit of extra luck is said to go to those who can jump over the burning effigy three times.

The celebration of Carnaval in February, like Mardi Gras in the U.S., is another opportunity for music, dancing, and great food, including made-only-once-a-year soups and pastries. Some of the biggest fun is for kids, who enjoy spraying passers-by with water or cans of foam and exacting a toll of pennies from people wishing to cross a street.

No matter what type of celebration you enjoy, Cuenca is definitely the place to be.

10 Things I Love to do in Cuenca, Ecuador