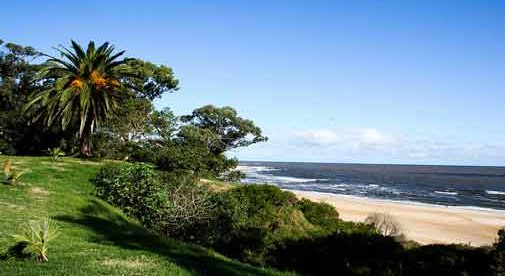 Although it’s not one of those “retire-at-half-the-cost” destinations, more and more expats are taking a closer look at Uruguay. They are attracted to the peaceful and relaxed lifestyle, the stable government, strong banking system, and mild, seasonal climate, without extreme temperatures.

With the reversed seasons of the southern hemisphere, the coast of Uruguay—particularly Punta del Estate—has long been a favored winter getaway spot of North Americans and Europeans. But coastal Uruguay also has some beautiful and interesting places for full-time residents.

Atlántida—Sitting just an hour’s drive east of Montevideo, Atlántida gets its name because it is considered the beach where the Atlantic Ocean officially ends, and the Rio de la Plata begins. Originally a getaway for the wealthiest Uruguayans, its proximity to the capital has since made it a popular middle-class resort. With only about 5,600 full-time residents, this can seem like a sleepy little town in winter—but its two beaches become very crowded during the tourist season.

There are still bargains to be found in this quaint small town. For example, there’s a three-bedroom, three-bathroom home, with a fireplace, balcony, terrace, swimming pool, and garden listed for just $169,800.

Piriápolis—If you like the beach, but enjoy being in the country too, Piriápolis is a great compromise. Situated about an hour west of Punta del Este, you drive through some beautiful farmland and ranches to reach this charming community. Piriápolis lies between this fertile region and the sea on the arc of a shallow bay, giving you the Atlantic Ocean on one side, and rolling green hills on the other.

The esplanade is adorned with white Greek-style columns, and follows the beach for two miles, ending at the Piriápolis Yacht Club. Strolling along this brick walkway under the palm trees, you can enjoy the sea breeze and the belle-epoque architecture of the city. The majestic Argentino Hotel, which at the time of its construction was one of the largest in all of South America, and the rounded tower of the Hotel Colón are just two of the most recognizable landmarks. Behind the yacht club, you can see the pink towers of the chair lift up to Templo de San Antonio, marching up the hillside.

With a population of about 10,000 full-time residents, Piriápolis is large enough to have the infrastructure you need, but still maintain a small-town atmosphere. Although much of the real estate market is geared towards short-term rentals, there are still affordable properties available. For example, single-family homes can be found in the Barrios Los Angeles starting at $165,000, and a local real estate agent is listing a three-bedroom oceanfront condo for $235,000.

Punta del Este—Punta del Este is a gleaming strip of high-rises, jutting out into the Atlantic. Further inland, there are neighborhoods like Pinares, full of single-family homes, many with thatched roofs, which seems a little out of place when you first see them. But soon you realize that the variety of architectural styles reflects the diversity of the European cultures that make up Uruguay’s population.

There are two, large white-sand beaches open to the public, one of which sports the iconic La Mano (The Hand) sculpture. Four fingers and a thumb poke up from the beach, in what the artist conceived of as the hand of a drowning man to warn swimmers to be careful in the waters. You will also find plenty of shopping, restaurants, casinos, and nightlife. Even in low season, things do not shut down completely in this vibrant peninsula.

Punta Balena—If you are not interested in the higher-priced, high-rise lifestyles of Punta del Este, there are some interesting and affordable options nearby. I was particularly taken with Punta Ballena. This narrow point stretches south into the Atlantic parallel to Punta del Este, visible across the bay formed by the two peninsulas. There are condos on the east side that step down the hills, giving all the residents a terrific vista.

In the other side of the point, there’s a two level, 2,450-square-foot-home sitting on a 10,000-square-foot lot giving westerly views of the Atlantic and the green hills of the interior. It has three bedrooms and two bathrooms, and is built with wood and natural stone throughout. Of course, you also have your own large grill—a must for enjoying the great Uruguayan beef—and it is listed for $270,000.

Of course, there are also more expensive homes on the top of the point that give their owners both the sunrise and sunset. But Punta Ballena deserves a close look if you want great ocean views that are close to the shopping, restaurants, and other advantages of the larger resort, but out of the press of the crowds.

That’s just some of the many communities waiting for you to explore on the coast of Uruguay.

Everything you Need to Know About Living in Uruguay