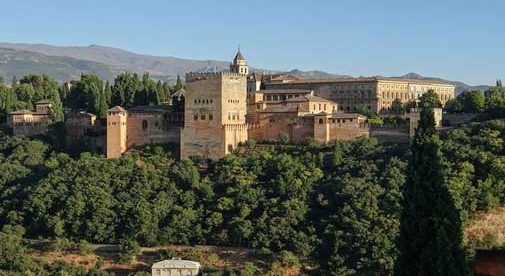 The ancient Alhambra fortress that looks down on Granada is evidence of its long history.

My wife, Jiab, and I loved our life in Dallas, she having risen up the corporate ladder for a major bank, me being a teacher and writer. Still, we talked of retirement and relocation. We believe people generally get three lives: The first when we are young and filled with wonder but don’t have the means to travel and explore, the second when we are working and gaining wisdom but still grounded by obligations such as job and family, and then the third life, when we have time and (hopefully) resources to wander and wonder.

We wanted a place that had adventure, a rich history, and perhaps most of all, a history of inter-blending cultures. Jiab grew up Buddhist in Thailand and I’m from a Texas Jewish background, so we have always loved taking the best of different cultures and creating a wholly new and unique blend.

We found it in Granada, Spain.

With the thousand-year-old historic Alhambra still looking over and guarding the city, Granada has, for centuries, been a crossroads of culture and a center for study, exchange, and appreciation of different peoples. Once its own kingdom consisting of a large region of Morocco, all the way up to southern France, Al Andaluz, including the Andalusian region of Spain, was the meeting point of Europe and North Africa, even helping to create a unique, blended architectural form called mudéjar.

Granada is a mid-sized (population 230,000) university town, so the young people make it vibrant, with learning by day and tapas and flamenco dancing at night. It is only an hour from the Costa del Sol and even less to the Sierra Nevada mountains, which offer the best hiking and skiing in Spain. The town is typical in that it has a concentrated center, enabling us to walk from the 500-year-old central Cathedral (built by King Ferdinand and Queen Isabella) to Federico García Lorca park on the far west side in only about 20 minutes, where Jiab does yoga with other expats while I write in a garden next to the summer home of the famed Spanish writer.

Perhaps best of all is Granada’s affordability. A night out on tapas sets us back only about $9 each with three drinks and three tapas (including world-famous paella). Most every restaurant has a menu del dia (menu of the day), which includes a drink (beer or wine), appetizer, main course and dessert for between $10 and 15 per person.

Many people ask us about health insurance, a major cost for retirees. In Spain (ranked number 7 by the World Health Organization in healthcare systems), one has to purchase private insurance for the first year. We pay only about $80 per month per person for a complete plan, with no copay and no deductible.

We’ve had to give up some American things, such as our cars and owning a large house, but have gained so much more, including walks in the mountains, studying and exploring antiquity, fresh Mediterranean food, and late-night tapas and music with friends (with a next-day siesta).

It really is a good life—no wonder the Spanish call it la buena vida!

5 Things to Do in Granada