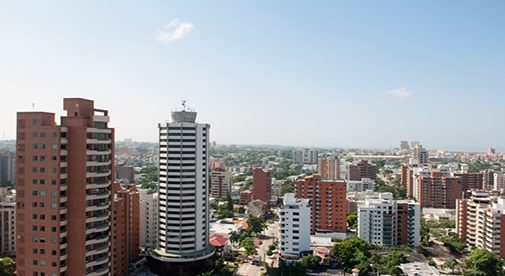 “When I first arrived in Barranquilla in 2012, I thought it was a nice place to stop on your way to somewhere else,” jokes Mike Chartrand. “It was kind of a hick town, nothing spectacular.” But over the past several years, the 44-year-old Canadian has watched it grow into a major economic and business center on the Caribbean coast of Colombia.

Usually the first thing that comes to mind about Barranquilla is Carnaval. It is the second-largest in the world after Rio de Janeiro, Brazil. I met with Mike two weeks before Carnaval officially opened. Decorations around the city were out in full force. He told me that many locals leave the city and rent out their apartments to festival attendees. He was staying put this year, but said he might do that in the future.

After growing up just outside of Ottawa, Mike says he never wants to see snow again—quite easy for him to do with Barranquilla’s tropical climate. The city has temperatures in the upper 80s F, high humidity, and warm breezes. “For me, it’s paradise,” says Mike. “If people realized just how easy it is to change their lifestyle and move down here, they’d come in droves.”

Mike lives in Alto Prado, an expat-favorite area located just north of Barranquilla’s historic center. Radiating from Washington Park—complete with its statue of George Washington—you can find plenty of bars, restaurants, and nightlife spots sprinkled around this upscale neighborhood. However, the cost of living is inexpensive. “I have a two-bedroom, two-bathroom apartment with three terraces,” Mike explains, “and I only pay $300 per month for rent, unfurnished.” Utilities are equally affordable. Water, sewer, gas, and electric run him on average $115 per month, and that includes having air conditioning.

“Barranquilla is my hub,” Mike explains. “It’s a great place to live and travel to other out-of-the-way spots.” One of his favorite places to visit is Palomino. “You take a half-hour ride up the mountain and then float down the crystal-clear river in a tractor tire tube.” Another special place that Mike visits is San Basilio de Palenque. “It’s a town of Africans who speak a different language, have a different culture and music. I love it.”

Barranquilla lives for music and dance. Mike enjoys going to the free concerts and shows held around the city. Practically every weekend in the Plaza de la Paz, across the street from Maria Reina Cathedral, you can listen to local music and watch cumbia dance shows. The malecón along the Magdalena River has several venues for concerts, as well as small restaurants and watering holes.

There isn’t a large expat retiree crowd in Barranquilla yet. Mike sees mostly 25- to 45-year-olds coming and going to teach English, start a tech-related online company, or just to visit. “I started Barranquilla Now to help build the local expat community,” says Mike. “It’s a website and Facebook page that is the region’s first and only English-language guide. The goal was to build a portal to the region for all newcomers and locals alike. It’s the best source for latest information, places to dine, sleep, or shop.” It’s this type of community spirit that makes Barranquilla life attractive.

The longer Mike has lived in Barranquilla, the more he has discovered that so much is possible. It was hard for him to concentrate on just a few opportunities. So, in addition to Barranquilla Now, he launched Urban English, a company that coaches and teaches English to businesspeople. The local Chamber of Commerce provided him with contacts at Colombian companies that need to improve their employees’ level of English.

Urban English has a team of North Americans that provide one-on-one coaching, individual and group classes, as well as handling presentation development, copywriting, and document creation. It also has a YouTube channel.

Mike admits that if he had first worked remotely for an international firm before he moved, it might have been easier. “It took me five years to get my income back to where I need it to be. But now this is my home and I have no other regrets. I’m my own boss and I set my schedule. If I’d known how wonderful the outcome would be, I would have moved here 10 years ago.”

What Do You Need To Teach English Online?

50 Ways To Make Money In Retirement