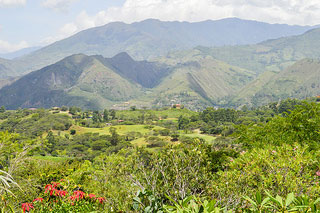 With a low cost of living, an ideal climate and an abundance of culture...there are many reasons to live in the highlands of Ecuador.

In the fall of 2011 my family and I relocated from Idaho to the small South American country of Ecuador. Some might think we’re crazy, but we feel that we’re ahead of the curve. You see, in our new home on the equator we’re able to work less and save more—giving us a good feeling about our future golden years.

As an increasing number of baby boomers reach retirement age, they appear to have less optimism about their future. Luckily, there are a growing number of people who have realized that retirement dreams can come true by moving abroad. Ecuador is one of the countries seeing an uptick in retired expats—many of whom have settled in the mountains of this equatorial nation. Here are five reasons why moving to Ecuador’s highlands could be right for you.

1. Cost of Living in Ecuador

Living frugally in Ecuador doesn’t require a downgrade in lifestyle or comfort. For example, a fully furnished two-bedroom, two-bath house or condo with breathtaking mountain views can often be had for $600 per month or less, and utilities (electric, water, propane) rarely run more than $40 per month.

Grocery budgets shrink substantially in Ecuador as well. Produce is grown year-round and is so plentiful that $5 at a local market can more than fill an oversized grocery bag with fresh-from-the-farm goodies. There’s also no need to own a vehicle as public transportation is widely available and quite affordable. In fact, a bus ride across town will likely cost no more than a quarter.

A comfortable retirement can be had for $2,000 per month and many couples live happily on far less.

Despite straddling the equator, Ecuador’s Andes Mountains maintain a moderate climate, described as “eternal spring.”  Average mountain highs are in the low 70s F while average lows hang around 50 F. These mild temperatures are ideal for active outdoor lovers, gardeners, or those who have a low tolerance for weather extremes. It also means that there are no cooling costs and little need for home heating, which again leaves more money in your pocketbook.

The trick to finding the ideal location weather-wise is to try different altitudes. The lower you go the warmer it becomes and vice versa. Many retirees love the colonial city of Cuenca, but for a few those 50 degree nights are just a little too chilly.  Further north in Ibarra it tends to average about 5 to 10 degrees higher with only a 1,000-foot decline in elevation.

Many expats have reported an overall improvement in their health after even just a few months of living in Ecuador. If you’re carting around a few extra pounds on your frame, which can have adverse effects on your health, Ecuador’s mountain towns just might help eliminate them. High altitudes act as an appetite suppressant for some and the abundance of fresh healthy foods can help drop unwanted weight. In addition, many retirees find that their activity level rises as Ecuador is a perfect place for biking, hiking, or daily strolls.

Ecuador’s second and third largest cities, Quito and Cuenca respectively, are both situated in the high Andes and possess world-class medical care. Specialists of all types can be found and often treatment costs are a mere percentage of what you’d pay in the U.S.

Those interested in alternative medicine will be pleased with what is available as well. Many of the locals still use plant-based remedies for their ailments and they are more than happy to share their wealth of knowledge. Shamans are widely available and purported to be helpful in diagnosing and curing physical, mental, and spiritual ills.

4. The Culture in Ecuador

The highlands of Ecuador strike a nice balance between modern comforts and preservation of the past. While many Mestizos inhabit this part of Ecuador there is also a large population of indigenous Quichua peoples who have worked hard to preserve their heritage. Spanish and Quichua are spoken side by side in many communities and native festivals and customs still play a large role in the Andes.

But that’s not the only culture you’re likely to find. International musicians, cuisine, and artwork can all be found throughout Ecuador’s mountain towns. If you’re looking to fill your retirement days with symphonies and museums you’ll have no problem in the metropolitan areas.

Living in the northern Ecuadorian Andes will put you in close proximity to Colombia which can easily be reached by bus. The southern sector will give you access to Peru. And many other Latin nations can be reached in just a few hours from Quito’s new international airport. Ecuadorian residents over the age of 65 also qualify for reduced airfare, making worldwide travel even more appealing.

But you don’t have to leave the country for great travel experiences. The edge of the Amazon or the sandy beaches of the Pacific are only four to six hours away from the mountains by bus and even the famed Galapagos Islands can be reached in a matter of hours by air.