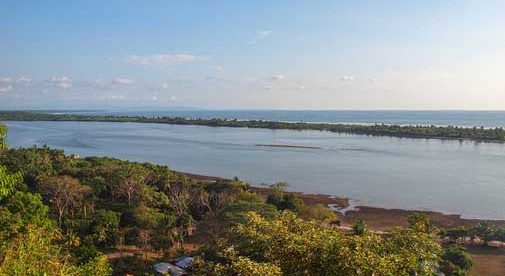 The words “pioneer” and “frontier” usually evoke images of 1800s homesteaders. However, that’s not always the case…there are modern day pioneers throughout lesser-known “frontier” land.

Karen Davies is a prime example. Her experience of moving from Oregon, U.S. to Costa Rica read like a 19th century novel.

Born and raised in southern New Jersey, she lived in a commune in Organ during the 1970s, “I was a free spirit hippie,” says Karen. In 1980 she, and six of her commune friends, made the decision to move to Costa Rica. “It was peaceful, warm, beautiful, and land was dirt cheap.”

The group lived in tents but were completely unprepared when the rainy season arrived. The rest of the group returned to the U.S. but Karen had come to love Costa Rica and made the decision to stay. The area in which they had pitched their tents belonged to a “gringo” friend of hers and when he left to volunteer in Nicaragua he offered his cabin to her.

It was a primitive way of life. She cooked with wood, there was no electricity, and the closest neighbour was a 45-minute drive away. She stayed a year but, after having her first child, she determined it was time to return to the U.S. in order to earn enough money to buy a place of her own in her beloved Costa Rica.

True to her resolve she returned a year later. She loved the area near Ojochal, which hugs the south central Pacific coast.

Surrounded by magnificent mountains it is centrally located near several stunning beaches. That’s where she bought two-and-a-half acres of jungle for $900, adding another 12 acres for $5,000 a bit later. When her brother relocated to the area, the two of them joined forces and purchased 50 more acres for $20,000.

“Back then permits were not necessary. I hired guys to mill a huge dead tree, then hired a neighbour to build a tiny house from it. No electricity, no inspections, and water piped in from a stream. Only nails and a roof were brought in by bus and then horseback.”

Karen bought cattle and worked her farm for 10 years, during which time she had two more children.  Then she felt it was necessary to move closer to a school, so she gathered her family and moved to Perez Zeledon. To bring in an income she taught English, as well as working in tourism and property management. In 1995 she bought a small house there for $14,000, which she now rents out.

Missing her farm, she returned when her youngest child was in the sixth grade. By then the coastal road had been completed and a new modern school had been built, and that’s where Karen remains to this day. Her grown-up daughters still live in Costa Rica; one works for the minister of health and the other does Thai massage. Her son now lives in California where he works in building design.

In 1997, her brother sold his six hectares to Karen’s current husband and together, they’ve developed it into serviced building lots. All but 35 acres of her original home site has been sold. “Most of my remaining land has been reforested and is not worth building on due to steepness and lack of ocean views. But it serves as a nice buffer zone between the sold lots and our personal home.”

There has been a lot of progress since Karen first arrived here…bridges and paved roads, even in her remote area. Her kids began learning in a one room school with no electricity, now buses transport students to many modern public and private schools.

“What I love most about Costa Rica is the biodiversity of flora and fauna and the warm climate. A typical day for me begins with fresh ground coffee, then I feed the calf and the dogs. Many days I volunteer for Family Assistance Centre of Ojochal, which involves visiting families in need and I also drive the locals to hospital. I have even driven two pregnant women in to have their babies.” Her days are full as nothing is close by. It’s a 20-minute drive to the bank, market, and a gas station.

But this is Karen’s life and she loves every minute of it. When asked if she would some day consider going back home to the U.S. to live, her emphatic answer is: “This is home.”