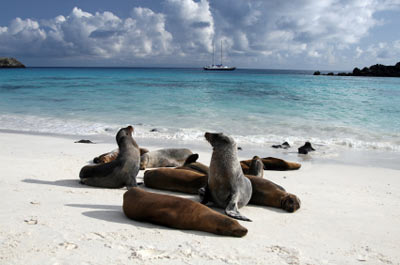 Discover the world’s treasures, like the hidden beaches and coves of the Galapagos Islands

Learn more about the best places in the world to retire in our daily postcard e-letter. Simply enter your email address below to sign up for our free daily postcards and we'll also send you a FREE report on The World's Top 10 Retirement Havens.

Several years ago, I found the dream car I’d always wanted, sitting on a lot in Phoenix, Arizona. It was a 1988 Mercedes 560SL—a two-seater with a removable hardtop—with only 40,000 miles, for just $15,000. And for just another $800, the guy even delivered it to my driveway in Vermont.

It was the perfect car for going on a Sunday drive…when it wasn’t raining or snowing that is, and when there was no salt on the road.

It went into the garage, next to my new four-wheel drive and in front of the snowmobiles…it barely fit beside the new three-speed snow blower. Unfortunately, the ski boat and trailer had to move outside, into the driveway.

Frankly, this is nonsense…at least in my case.

Having plenty of money and lots of possessions suited me just fine.

It’s unpopular to say it these days, but I enjoyed owning those things. The same goes for the camping gear, the gun collection (with reloading equipment), and enough photographic paraphernalia to stock a small shop.

Having lots of possessions felt good.

But as it turned out, not having them felt even better…although my journey to this enlightened stage was not a simple one.

The problem was that I wanted to retire before I was 50…and I couldn’t have it both ways. My lifestyle required a good job to support all that material overhead.

So I decided to get rid of it all and retire abroad, where I could live for less. Rather than provide continued long-term happiness, my stash of goodies provided the inventory for southern Vermont’s largest yard sale of the year.

And surprisingly, as the new owners carted off all my things, I realized that it felt good to see it go. It was liberating.

Now I was traveling light in life. It’s like the difference between walking briskly into the airport with a small carry-on and struggling to drag two large suitcases up to the check-in counter. You may like the stuff in the suitcases, but it sure feels good to travel without them.

Now here’s where you’d expect me to say that after this revelation, I was changed forever. But that wasn’t the case.

Like a reformed smoker or recovering alcoholic, feeling good doesn’t mean that you never wish for a cigarette, a drink, or in my case, a new motorcycle or electronic gadget. My liberation from all that stuff was not without its wistful moments.

But I finally realized that by shedding all those possessions and moving abroad, I was getting a lot more enjoyment for my dollar.

And instead of spending money on toys, I was spending it on rich, new experiences. In fact, for a small fraction of what I had been spending, I’d snagged myself an entire new life.

I was immersed in a new culture, with new social customs and a new language…new friends and activities, in a lifestyle that was far more rewarding than the simple accumulation of more things.

I spent a week living in a native village deep in the Amazon rainforest…discovered the hidden beaches and coves of the Galapagos Islands…dove in crystal-clear water on one of the hemisphere’s best reefs…and sampled warm cane liquor in a tiny cup as it dripped from the still.

I had time to take up writing, and got to see even more of the world. From the tango clubs of Buenos Aires, to the mountains of Peru…from the lush, Lakes Region of Chile to the Reggae capital of Brazil. There was hardly a corner of the world that was not concealing some hidden treasure.

Perhaps my most rewarding new experience didn’t cost a cent: being able to pick my own oranges, avocadoes, mangos and grapefruits right off the ground…while drinking rich, dark coffee all year from our own beans.

One day—years later—I realized that I wasn’t tempted by possessions anymore. Adding rich experiences to my life had taken over as top priority, and stayed there.

The New York Times reported that, “Studies of consumption and happiness show that people are happier when they spend money on experiences rather than material objects.”

I believe it…and moving abroad fits the model perfectly. You downsize, you move to where it costs less to live, and the money you have, you spend on new life experiences.

And what you’ll find is that those experiences will reward you with good feelings and fond memories far longer than possessions. Often, the memories last a lifetime.

So we could debate whether or not you can buy happiness with possessions…maybe you can.

But I’ll guarantee you that you’ll find more happiness by investing in those new life experiences.

A low-overhead lifestyle abroad is freedom at its finest.

Learn more about the best places in the world to retire in our daily postcard e-letter. Simply enter your email address below to sign up for our free daily postcards and we’ll also send you a FREE report on The World’s Top 10 Retirement Havens.