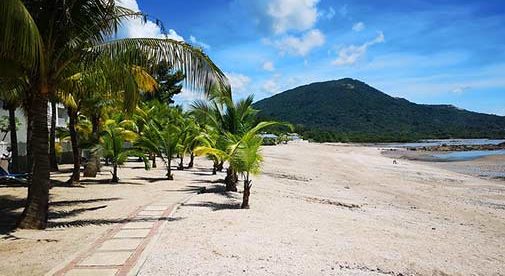 Real Estate Trend Alert is a unique sort of group. Different from all others.

We’re investors, but we don’t pool our money. We don’t analyze stocks or bonds. And we don’t care much what happens on Wall Street.

We are all about making big money in overseas real estate using our collective buying power and our extensive network of insiders.

We’re a group of ordinary folks, but together we wield influence that gives us an edge no one else has… We can negotiate highly profitable off-market deals…opportunities that the public don’t know about…that only RETA members have access to.

And we’re set to do it again…

RETA members have an incredible chance to lock down true beachfront in Playa Caracol, the nicest, closest beach to Panama City.

This kind of genuine “steps from the sand” real estate is rare anywhere in the world. But at our RETA-only price, it’s unheard of…

As a hands-off rental play, we’re looking at exceptional returns. I figure net yields of 7% to 15.8% as the community becomes established.

With this beachfront deal, we’re getting a killer discount thanks to what I’m calling the “Great Bailout,” a huge drive by the Panamanian government to promote and develop tourism along the country’s Pacific Riviera.

The Panamanian government is effectively footing the bill for a vast chunk of the construction in order to promote tourism and, because of RETA‘s group buying power, the developer has agreed to pass that saving onto us in the form of a massive discount.

RETA members have already had several opportunities in this stunning master-planned community and they’re now sitting on paper gains of $100,000.

In 2017, I brought members the chance to buy in The Palms at Caracol from $199,000. Last fall I came across a similar-sized condo farther back from the beach with only a side view listing for $299,000.

I don’t often share developers’ renders here—they’re subject to change and not final. But on this occasion, I couldn’t resist… It doesn’t get any more beachfront than this:

Like I say, this kind of true beachfront is rare anywhere. But beachfront on the nicest, closest beach to a rapidly growing global city is unheard of…

And it’s about to feel even closer…

Millions of dollars are being invested in mega infrastructure projects and you can see the results as you travel west from Panama City towards the Riviera Pacifica, where we have our opportunity.

A $370 million project to widen the main highway from the city to the Pacific coast is in progress. Parts of the highway will have eight lanes when it is finished. A fourth bridge will be built across the Panama Canal, improving access from the city to the coast. And plans call for the city’s metro system to run out to the western suburbs, close to this area.

This will be a game-changer…it’s set to make it even easier to get from the city to the uniquely beach-facing community of Playa Caracol where we have our latest deal.

Meanwhile, Panama City is booming. The World Bank says that over the past decade Panama has been one of the fastest growing economies in the world. It has had an average annual growth rate of 5.6% over the last five years.

It’s truly global now, attracting wealthy and well-heeled folks from all over the world.

You’ll find 78 banks in Panama City plus Panama is the biggest recipient of foreign direct investment in Central America. Panama has become the largest per capita exporter of services in Latin America. And it’s incredible to think that 5% of all global trade passes through the Canal in this tiny country…

Panama’s robust economy weathered the 2008 crisis and Panama will withstand the current global crisis just fine, too. The strength of its banking sector has boosted its status as a global safe haven, and as and the world gets more volatile, Panama continues to attract major capital.

Recently, my senior researcher, Margaret Summerfield, and I sat down for a Zoom call with Panamanian developer Alfredo Aleman. I know a lot of smart and innovative developers. But Alfredo is in a league of his own when it comes to vision, drive, and imagination.

He’s the man behind some of the most ambitious and successful projects in Panama—including Ocean Reef, a community built on two artificial islands in Panama Bay. And he’s the developer who’s delivering the best-in-class community in Playa Caracol where we have our opportunity.

Alfredo discussed the strength of Panama’s banks and why its monetary system is proving so resilient. You can watch it here:

The popularity of our past deals in Playa Caracol tells me that demand will be very high. So, be sure to contact the reservation team as soon as you receive your Alert.

Can I speak directly to someone about the opportunity in Playa Caracol?

Question from Mary: Hello! I’m very interested in real estate opportunities you’ve mentioned in Playa Caracol. Would it be possible to speak with someone to obtain detailed information?

Ronan’s response: Hi Mary. Yes, it would. When this deal opens to RETA members tomorrow, I’ll send out an Alert which will have the contact information for the developer’s team. You will then be able to ask them any question you have about the deal.

If you’re a RETA member, you can also access my full report on our opportunity on the RETA website. You can read it right here.

Ronan says: As I say in the piece above, RETA members have had a number of opportunities in Playa Caracol already.

Recently, Jon wrote in with some feedback on our last deal there, earlier this year.

Jon says: I have been a member of RETA for about a year, and followed the emails and opportunities to get a sense for their offerings. I have been an International Living subscriber about three years, but wasn’t able to invest until recently.

When the opportunity came up in Panama, I thought this had the features I needed, and it was the right opportunity to buy. I was looking for below market properties with potential for an income stream and appreciation.

The benefit of belonging to RETA is that you wouldn’t know about these deals unless you had your own “boots on the ground” to find the opportunities, plus they provide access to the attorneys and developer sales team to help with due diligence.

For example, because the building is on the beach, I wanted a soils report and they sent it within a couple hours. It was in Spanish, but I was able to understand the graphs and tables and had confidence that the soil was adequate for a firm foundation and minimal risk from floods and storms.

I decided to buy in this project because the price is within my budget and the up market potential is good. I understand there is a limit of white-sand beaches (I’ve lived in Hawaii and San Diego) so the masterplan development with a major developer and architect in this location makes sense. Also, the tax breaks are passed on to us. It is entirely turnkey and furnished. I am looking for a source of revenue and need someone to handle all the renters and just send me a check every month. ROI projections are reasonable. Over the next five years, there should also be appreciation so I can sell if I need to, and appreciate the capital gains along with the cash flow.

Regarding having to buy sight unseen. I would have flown to see in person but the airport is closed. I’ve never been to Panama, so I used Google Earth to zoom in on the area. They also had historical photos so I could see the original land topography and various stages of development. I am familiar with this application because I use it in the U.S. for places to do recreation. I might not have moved forward with the purchase without this tool. Plus additional info that was sent in the package was important confirmation. There was a lot of information about Panama and the general area, and I was able to verify much of this from third-party sources.

My advice for people looking to join RETA: If you are looking at international properties and you don’t have familiarity with the area, they are the best organization that I know of to do the groundwork. RETA locates and offers properties below market value with both appreciation and income possibilities.

Get a Second Passport When You Buy Real Estate