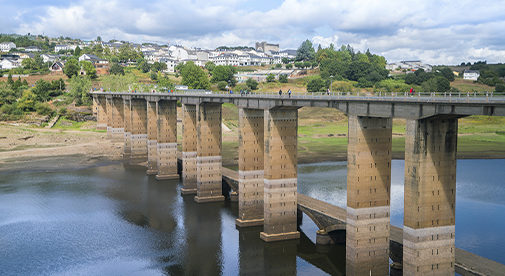 Since the discovery of St. James’ remains in 812 AD, worshipers have hiked the long and scenic Camino de Santiago pilgrimage to the cathedral in Santiago de Compostela in Spain’s northwest corner. Before that, the same route was traveled by pagans, who trekked across the landscape in a born-again ritual. They would finish at Fisterra (the end of the world in Galician), burn their clothes, and watch the sun set over the Atlantic Ocean.

Though the Camino de Santiago Trail is traditionally walked for spiritual reasons, Denis Houde says that today people have all kinds of motives in mind. “Some people do it for just plain tourism. For some people, it’s a bucket-list thing. Some people want to lose weight. Some see it as a challenge.” In 2017, some 300,000 pilgrims finished the Camino; its modern-day popularity perhaps being boosted by its depiction in popular culture, including the 2010 film, The Way, starring Martin Sheen.

Denis moved from Montreal to Madrid, Spain after falling in love with the ancient pilgrimage, which has 14 main routes that stretch across much of Europe and even North Africa. Six years later, the French-Canadian’s love for the Camino has blossomed into Rayo Travel, a custom-tour business that helps visitors make the most of this world-famous walking route.

“When you finish the Camino, you just want to give back,” says Denis. “It is such a moving experience for many people. You are deeply touched, and you feel grateful. You want to pass it on somehow.”

The idea for the business was suggested by another Canadian, a retired gentleman who had walked the Camino and noticed a lack of information for pilgrims. He hired Denis to research and write a report about the feasibility of developing an app to address the problem. Ultimately, Denis’ conclusion was “Nice idea. Technology and Camino don’t go together. Save your money.” But his client was persistent and in 2009 he sent Denis on a 10-day pilgrimage that forced him to rethink his conclusions. “On my second day of walking, I realized ‘OK, I understand now. It’s different. There is something else here. This needs to be done.’ I was hooked.”

Denis noticed that many of the pilgrims did not have hiking experience. “I saw that there was a need for support. There really wasn’t any guidebook out there that mentioned where to eat, or where to sleep, and very little on what to do or see along the way. The 500-mile trail required so much information that any printed guidebook would end up being like carrying the entire Encyclopedia Britannica in your backpack.”

The original idea of creating an app proved not to be financially viable. “Our company has evolved since. We started with this app, but we quickly realized, maybe two or three years in, that the unique feature that brought people to us was not the technology but that we would customize trips. Ever since we changed our focus from an app to custom trips, things have been steadily flowing in, and we continue to be a leader in the industry.”

Today the Rayo Travel website shows sample tours and offers a free questionnaire to begin the tour customization process. Denis designs and books tours to meet the specific needs of each client. The original app has evolved into an exclusive smart-book for the traveler’s phone, tablet, or Kindle that works in conjunction with GPS maps to provide personalized information for each journey. The tours are self-guided, but Denis is always available by phone and text to provide personal support along the way.

Though things move a little slower than he is used to in North America, Denis loves the Spanish mentality. “People don’t live to work, they work to live…and not just on the weekend. Every day of the week they are in the bars socializing with friends and neighbors. They may not be the richest people, but they are happy. They enjoy the ride rather than focusing on the destination. That’s the lesson of the Camino… They are enjoying the journey.”

A Profitable Beach Bar Business in the Caribbean Haven of Belize

I Saw 7 Countries In 7 Months…With This Portable Income