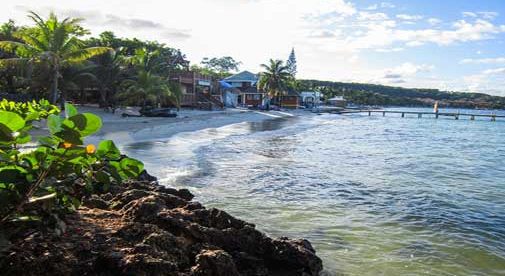 Learn more about Honduras and other countries in our daily postcard e-letter. Simply enter your email address below and we'll send you a FREE HONDURAS REPORT: Island-living at an Affordable Price in Honduras.

When Joe and Kim Wonder were building their home on a quiet stretch of coast on Roatán island’s less developed eastern side…they came across pieces of history. A cache of rum bottles—most broken, one fully intact—from pirates that were most likely stationed as lookouts…or perhaps manning a cannon to guard against intruders.

And it’s rumored that a pair of small rock formations just offshore, known as the Cow and Calf, were a favorite spot for pirates to bury treasure.

The Wonders haven’t come across any pirate gold yet. But over the last 10 years these Florida natives, both 59, have treasured their time on their three-acre patch of land with 375 feet of waterfront.

Their 1,000-square-foot home is near the community of Port Royal, which was once a pirate settlement, and only accessible by boat. It’s off-grid, with solar power and satellite internet, perched on a hillside overlooking the water and surrounded by forest.

The windows are thrown open most of the time to admit cooling sea breezes “We don’t have air conditioning. We don’t need it,” says Kim. And they have, of course, panoramic views of the azure and crystal-clear Caribbean from any spot in the house, including their large deck.

“We’ve left most of the land pretty much raw. Everything behind us is national park. The water is so beautiful. We’ve lived here 10 years but we always still go out on a calm day, snorkeling or fishing,” says Joe, who notes they have a skiff, a live aboard trawler, and other watercraft at their private dock. “We’ve been boaters all our lives…it does take that to live here.”

The couple came to Roatán originally because their daughter was doing mission work nearby in the fishing village of Oak Ridge. It was their first time visiting Roatán, a 32-square mile island, 30 miles off mainland Honduras, and it soon called them back.

“We were looking at islands for retirement,” says Kim. “The second trip we looked at property. The third trip we closed on a property.”

They first settled on Roatán’s busy western side, which has plenty of shops, restaurants, and beach bars and is where many of the tourists who flock to the island stay. Roatán, which thanks to its history as a British colony is English-speaking, first became known as a diving mecca—the world-renowned MesoAmerican Reef is just offshore. And the fishing is superb. Now plenty of folks who just want to relax in the shade of a palm tree on a white-sand beach come calling. Americans and Canadians make up the bulk of the expats, with many coming during the North American winter to escape the cold.

“It got too crowded and we wanted to be on our own,” says Kim of their move to the east side of Roatán. “We’re away from people but they’re just a short boat ride away. We make one supply run a week to French Harbour (one of the largest towns on the island) for gas and groceries. And with all our expat friends we try to pick one day a week to socialize. We love it here.”

Get Your Free Honduras Report Here:

Learn more about Honduras and other countries in our daily postcard e-letter. Simply enter your email address below and we’ll send you a FREE HONDURAS REPORT: Island-living at an Affordable Price in Honduras. This special guide covers real estate, retirement and more in Honduras and is yours free when you sign up for our postcards below.

Learn more about Honduras and other countries in our daily postcard e-letter. Simply enter your email address below and we’ll send you a FREE HONDURAS REPORT: Island-living at an Affordable Price in Honduras.