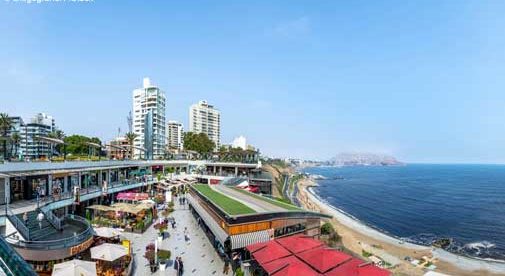 Lima has all the sophistication of a modern capital city, without the high costs.

Few tourists stay in Lima, Peru, for long. For most, the capital city is where you spend a few hours at the airport or bus terminal, waiting for your connection to more rural and picturesque parts of the country. The best-known temptations of this ancient land are farther south: Machu Picchu and the Sacred Valley of the Incas, Cusco, or the Spanish colonial city of Arequipa.

But with its mild climate, many parks, panoramic sea views, and relatively low cost of living, Lima is becoming more popular with expats from around the world. The Peruvian capital is host to a large number of foreigners who are attracted to all the above. What’s more, the city’s growing culinary reputation adds to its attractiveness. A gastronomic revolution has taken place over the last decade that has turned the city into a world food destination.

Lima has all the sophistication of a modern capital city, without the high costs.

Walter Rhein is originally from Wisconsin but has been living in Peru on and off for the past 17 years. He first showed up in Lima in 2001, and he lived there full-time for the next eight years. Now, he and his wife maintain residences in both the U.S. and Peru, and they spend a considerable amount of time in Peru each year.

“I worked my way through college, so I didn’t have any debt,” says Walter. “Back then, the city was even cheaper than now, and it wasn’t difficult to earn enough money to survive. It was just surprising to me how you could live so inexpensively in Peru. After a while, it just got to be like, ‘Wow, this is too easy. If I only have to make $8,000 a year, I can do that standing on my head.’

“I lived in Lima for about three years before I even went to Machu Picchu. I wanted to learn the language, and I was just hanging out. I liked how inexpensive it was.”

When asked whether Lima is a good place to retire, Walter responds enthusiastically. “Absolutely. The climate is mild year-round, not like northern Wisconsin, where you’re dealing with 30 below. And Peruvians are very kind to foreign people, too. They adopt you, and all of them are very interested in learning English. There’s nothing close to animosity against North Americans in any way that I have seen. They are always very curious about it. It’s a very warm culture.”

Today, Walter agrees with others on the cost of living in Lima: An average couple can have a very comfortable lifestyle for $2,000 to $3,000 a month. In other parts of the country, you can live on much less.

“Renting a nice apartment in Miraflores (an upscale district of Lima) is going to start at $800 a month. Once you get to $1,000, you’re starting to get ones with a nice ocean view. You could probably keep it to another $1,000 for food and entertainment. And then your healthcare is inexpensive. I could still live here for under $1,000 a month, if necessary,” Walter says.

“My quick calculation is that I was spending $8,000 a year here in the old days, and that included two trips to the U.S. and one trip to Europe. And that was going out to eat four or five times a week.” Nowadays, living in Lima costs more, but it’s still affordable. “I mean, you can have someone live with you and prepare your meals for under $500 a month.

“Pharmaceuticals is another big factor. I use an inhaler…my Ventolin inhaler in the U.S., with insurance, is $25. In Peru I can get the same inhaler for $6. There is another one for asthma, the Advair Diskus. That’s $250 a month in the U.S. Here, it is $50—buy two, get one free.

“And this applies to all medications…any medications you are taking, across the board, costs a fraction of what you would spend in the U.S. And that’s probably a large part of the cost that most people who are retiring are spending.”

In his spare time, Walter enjoys running. He says, “Lima is a nice city for running but not really a nice city for biking. The traffic is too crazy. But I like to go to the gym; there are a lot of nice clubs. There are lots of classes you can take and some good options for golf. And, of course, the dining is fantastic.”