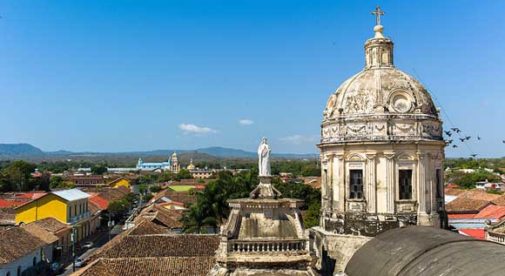 If it’s Spanish Colonial charm you’re after, you can’t do much better than Granada, Nicaragua. The place is steeped in it.

It’s only natural… Granada was the first European city on mainland America, and historians have the official records of the Crown of Aragon and the Kingdom of Castile to prove it. Thanks to its location on Lake Nicaragua and its access to the Atlantic via the San Juan River, it was essentially a Caribbean port for the Spanish, and much of the gold, silver, and other wealth the Spanish sent back to Spain during the conquest was sent from Granada.

This may have originally made the people who lived there feel secure…but it didn’t take long for English, French, and Dutch pirates to find their own way up the San Juan to Granada’s docks, and the city was raided, razed, and rebuilt for hundreds of years.

Oh, and there was that year between 1856 and 1857 when U.S. filibusterer William Walker, living in Granada at the time, crowned himself King of Nicaragua… but although he did add some history, he didn’t add much to the colonial charm of the place during his reign.

Today Granada is one of Nicaragua’s most popular tourist destinations, even for Nicaraguans. People from Managua can drive down on a well-maintained two-lane highway to get away from the capital for the weekend and socialize along Calle la Calzada, the pedestrian street lined with outdoor bars, cafés, and restaurants just off the city’s main plaza.

Many of the old homes within a few blocks of the plaza have been bought up and rehabbed by Nicaraguans and by expats from all over the world, some of whom have started businesses here, including natural food stores, gyms, yoga studios, restaurants, real estate agencies, and art studios.

In fact, ask some of the long-time expats living in Granada and they’ll tell you that they actually miss the old days when the café tables didn’t spill out into la Calzada and you had to go to Managua for any real shopping or nightlife.

Of course, Granada’s local mercado offers just as much fresh fruit, vegetables, chicken, beef, and pork as it ever has, and the little local restaurants and shops still feature the same local food and handicrafts they always have, so it’s not hard to get the small-town feel of Granada when you want it.

And for those who miss the “old days,” there are just as many who are happy to have the new La Union and La Colonia grocery stores and a couple of Irish pubs and sports bars in town, making the drive to Managua optional for most of the real necessities of life.

But all things considered, there isn’t much that can mask Granada’s colonial charm and ambiance. The central plaza is as old-world as Spanish Colonial plazas come, with gazebos, fountains, kids, vendors, and horse-drawn carriages. The cathedral looming over the plaza is every bit as old and authentic as it looks, and the same with the nearby La Plazuela de los Leones, where Captain Morgan actually mounted 18 cannons just to show how serious he was about plundering the city’s silver cache in the 1600s.

And from a third or fourth-floor balcony or terrace almost anywhere near the city center you can see the distinctive red tile roofs of Granada stretching into the distance. More than a few photographers have made beautiful compositions out of those roofs and the grand old palm trees poking up between them, waving in the breeze from nearby Lake Nicaragua.

Granada isn’t the sleepy town that some expats are nostalgic for… because it never really was. Granada started out as one of Central America’s most important administrative and economic centers, and it remains one of Nicaragua’s most important cities to this day.

Its current popularity as a tourism and entertainment destination certainly brings more people and services to the city, and for many of the people who live here… including many of the estimated 2,000 expats that call Granada home… that’s a good thing.

A Variety of Things to do in Granada

In addition to its colonial charm, Granada offers interesting things to do for tourists and expats alike. If you’re a nature lover, you can take a panga (boat) ride around the isletas–the little islands that dot the coast in front of the city on Lake Nicaragua (Colcibolca, as the natives call it.) You’ll see all sorts of birds, monkeys, flowers and other interesting sights–guaranteed. Or take a hike up Mombacho volcano for a feel of the countryside and a visit to a coffee plantation.

If it’s adventure you’re after, visit the Mombacho zip-lining attraction, which will have you flying in no time through the air over the thick woods within sight of the lake.

For foodies, Granada also delivers. Whether you have a phenomenal lunch at the Garden Café in a beautiful, relaxing old colonial home, or venture out at night at Tercero Ojo for authentic Spanish tapas, you’ll be more than satisfied. Don’t forget spending at least one evening on La Calzada Street, where traffic is not allowed, but street entertainers are. You never know what you’ll run into there, but it’s always a great evening.

For those of you who love culture and history, visit the El Choco museum, a tribute to the cacao and chocolate production in the area. If you have time, participate in a workshop and learn how to make your own chocolate.

Visit the San Francisco Convent museum to learn more about the history of Granada. Built back in 1525, it supposedly houses the remains of over 75,000 people affected by the sometimes violent history of the town. View some statues that date back to 800 AD as well. Or visit the Casa de los Tres Mundos (House of the Three Worlds) to see student art from Granada and special artistic demonstrations of music, dance, and theater in a completely renovated old colonial home.

Granada also has the most expats in Nicaragua, which at last count had a total of close to 5,000 in the country. As soon as you are connected, you’ll be invited to book clubs, exercise groups, cooking and painting classes. Whatever you can think of, Granada has it, and if it doesn’t, you can start your own group easily.

This list could go on, but suffice it to say that if you choose Granada to retire, you will never be lonely or bored. In fact, you probably won’t even be able to fit everything in. Retirement in Granada gives you the option of doing all the things you always wanted to do in your home country, but never could because it was too expensive, or you were too busy. So move to Granada and immerse yourself in the colonial atmosphere with plenty of things to keep you busy.