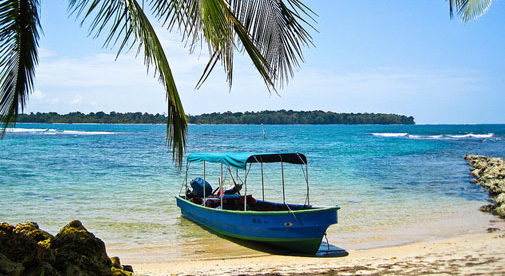 This Vancouver couple discovered a way to travel affordably in retirement, while at the same time exploring all that the Caribbean has to offer.  Their unique take on an increasingly popular travel trend allows them to soak up the sun in some of the Caribbean’s best retirement hotspots…and they’re doing it all rent free.

Johanne and her husband Doug live rent-free in a four-bedroom luxury villa overlooking the Caribbean. From the veranda, they have a 300-degree view of the colorful homes dotting the hillsides of their island home in the Grenadine Islands, in the eastern Caribbean.  “Our days are spent mostly lounging around the infinity saltwater pool, making sure the pets get everything they need,” says Johanne. “A small price to pay for such a great lifestyle.”

It’s a far cry from the life they left behind in Vancouver. In 2015, with Doug approaching retirement age, they began to consider a move to a more affordable country, where the sun would shine every day and where they could shed their winter clothes.

“Barefoot on the beach sounded much better than shivering in the Canadian winters,” says Johanne. “That year, we explored Ecuador and fell in love with the small coastal village of San Clemente. We planned to return in January 2016. But when it was time to book our trip, a serious El Niño was predicted for Ecuador, so we decided to explore Nicaragua, instead.

“Just days before our plane was scheduled to leave, we saw a request for a four-and-a-half-month house/pet sit on the rim of a volcano at Laguna de Apoyo. The home was in the jungle, with unobstructed views of Lake Nicaragua. I could picture myself having my morning coffee, rocking with a cat curled up on my lap.”

Doug responded to the homeowner and set up a Skype call. Eager to meet, they added Laguna de Apoyo to the itinerary where they hit it right off—Doug and Johanne were on their way to their first housesit.

“While learning about what housesitting entailed, I was discovering a new purpose in life,” says Johanne. “My career of 37 years caring for small children was soon to be over. And it would be replaced with caring for animals—not a bad trade.”

Back in Vancouver, Johanne’s decision to retire came as a shock to all concerned. With nothing but a few suitcases in tow, they would become slow travelers instead of mere tourists.

Their first housesit was a blast. The super-friendly homeowners even organized a barbecue to welcome Johanne and Doug to Nicaragua.

“I was loving the life of a housesitter so much that I agreed to delay our plans to settle down somewhere, and to find more housesits, instead,” she says. “We eventually spent nine months in the area, paying no rent.

“Our second destination was Mexico’s Yucatán Peninsula. I absolutely loved everything about this region. The cost of living was very low and the people were so welcoming. We spent two fabulous months there, doing a few spectacular sits in the beautiful colonial city of Mérida and the quiet fishing villages of Sisal and Celestún.”

The housesits in Sisal and Celestún were directly on the Gulf of Mexico. They enjoyed long, invigorating walks on deserted beaches awash with miniature shells. Warm, blue-green waters were tempting all day long. Pelicans skimmed the waves searching for the catch of the day as flamingos flew by overhead.

“In Mérida, we found many restaurants that offer tasty meals for two (with a drink) for less than 200 pesos (around $12). The evenings were particularly pleasant for a stroll in the old city, stopping to enjoy free entertainment.”

Next stop for the Canadian couple: Bocas del Toro, on Panama’s Caribbean coast—another new country for them.

“It’s been a great adventure so far,” says Johanne. “I know I have made the right choice with my life.”

Mérida, Mexico: A City that Will Capture Your Heart