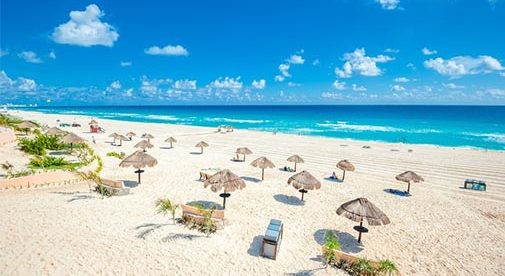 While most people would consider a car accident bad luck, Mike Sasuta describes the accident he was involved in while visiting Cancún in 1997 as the best thing that ever happened to him. He wound up staying several months to recover, and during this time he fell in love with a woman and the famed Mexican city.

For Mike, the year-round warm weather was a pleasant contrast to his native Chicago. Moreover, Cancún boasts all modern amenities, over 750 restaurants, and gorgeous public beaches that border the aquamarine waters of the Caribbean Sea.

Another plus was the high-quality medical care, something Mike had learned about firsthand. Plus, he says that if you’re based in the central parts of the city, rather than in the tourist areas near the beach, the cost of living is very reasonable.

Mike resolved to make a permanent move, so after recovering sufficiently from his accident, he went back to Chicago to straighten up his affairs. When it came to funding his new life in the sun, an immediate solution came to mind. “I’d always been involved with computers and had studied computer science and engineering in college,” Mike says. “So, it was natural to go into the computer business in Mexico.”

Shortly after arriving back in Cancún, he found work at a small computer repair company, and immediately recognized the growth potential of the local market. “Cancún was growing and had an expanding expat population, as well as large businesses, hotels, and resorts that needed network maintenance and installations.”

The accident had placed him in the right place at the right time. “After working for another company and learning more about the local market, I decided to start my own business,” he says.

In 2003, he officially opened Mike’s Computer Systems. “My business is going very well. I service a number of large clients as well as individuals. I repair all brands of computers and networking systems, and I also sell new computers whenever someone needs one, and install wireless internet connections in both business and residential premises.”

Always one to spot a gap in the market, Mike has also branched out into other areas. “I have expanded my business to include the sale, installation, and maintenance of security camera systems for homes and businesses,” he says. “Their interface with computers makes it a natural expansion for me.”

Mike says that these days he receives most of his business from referrals, but also maintains an active Facebook presence. In addition to the Cancún market, Mike services a client base on the tiny island of Isla Mujeres, just offshore of Cancún, and conducts business in the nearby state of Yucatán, as well.

Now a family man with two teenage daughters, Mike just recently bought a new house and vehicle. His cost of living remains low by U.S. standards. “Our monthly expenses run between $1,000 and $1,200,” he says. “We live a very comfortable life.”

Is it Safe to Live in Cancun?