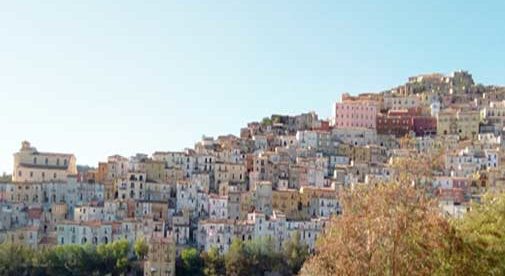 It started on a whim. Angela Paolantonio was traveling in Italy back in 2000 when she made a spur-of-the-moment decision to hop on a bus to her ancestral town of Calitri, east of the Apennine mountain. It would become more than a quick trip, but a journey of discovery.

In Calitri she was embraced by cousins, great-aunts and great-uncles, and found herself in the midst of a warm extended family whose love and hospitality won her over.

A few years later when a great-aunt passed away, Angela was given the opportunity to acquire the house where her grandmother grew up. While maintaining her photography and creative arts career in Los Angeles, she started spending a few months a year in Calitri, surrounded by her famiglia and enjoying the sweeping panorama from her balcony. “It looks out over the beautiful Ofanto Valley and Southern Apennines, with the chapel of Santa Lucia in my direct view. It’s the balcony view of my grandmother’s youth.”

Angela had used the home part-time while keeping her life and job in California. In 2010, at age 50, she ditched life in Los Angeles and moved to Italy full-time. “It turned out to be the best decision and one of the most adventurous leaps of my life.” She calls the transition, “both rewarding and challenging.” She learned as she went along, both the language and the cultural differences. “Adapting and assimilating to the culture is a lifelong process,” she says. She chronicled her journey in a memoir, The Ghosts of Italy.

Calitri is a cascade of picturesque pastel buildings and cobbled lanes. There, Angela settled into the rhythm of small town life, enjoying its markets, piazzas, and passeggiata (strolls). With degrees in fine art and art history and plenty of professional photography experience under her belt, Angela struck out to redefine herself in her new surroundings. She took on a variety of creative ventures that not only earned an income but garnered her accolades and helped spur community development and cultural growth.

Because of Angela’s influence, more expats have started arriving in Calitri, and the town now has dozens of part-time foreign residents, drawn not just by the charm but by the prices. In Calitri, you can buy a home for less than $50,000, and the overall cost of living is low. A delectable dinner out for two with wine and all the courses can be had for just $36.With projects that include curating, consulting, and designing exhibits, the energetic and tenacious Angela has been able to collaborate with municipal and provincial entities to produce photographic books, exhibits, and cultural events around the region. “I’m proud of having contributed to the artistic and intellectual activities of this village and other communities over the years. I’ve worked alongside and supported the contributions of an array of artists, educators, designers, and directors from around the world. And many have remained close friends.”

Angela notes that there has been a growth in niche tourism and more services since she first moved here. “In my eyes it has grown but not changed. The Old World lifestyle is still very much in place.”

Angela also started teaching English when she first moved, which she found rewarding. Building on that experience, she’s now taking a new leap of faith, this time to Naples, where she will be Director of Studies at an English school.

“I’m looking forward to city life and using the city as a jumping off point for other local travels and adventures. I plan to be very culturally involved. I’m also a new volunteer communications liaison for the American consulate here in Naples. And, of course, Calitri is not far away. It will always be my home.”

Everything You Need to Know About Retiring in Italy