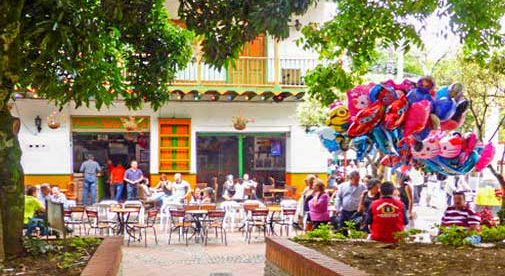 The family-oriented, traditional town of Sabaneta, Colombia, just south of Medellín, is where Chris Cajoleas now calls home. Its central park is the perfect location to meet with friends or people-watch. With a beautiful church at one end that faces benches shaded by flowering trees, a fountain, and footpaths, the park follows the formula that exists in many of the small cities and towns in Colombia. All around the park are cafés, restaurants, bars, and shops.

“I moved here from Medellín because I get more for my money,” Chris Cajoleas says. “I am renting a three-bedroom apartment a few blocks away from the metro stop and the Mayorca Mall for less than $300 per month. My monthly utilities are only $60.”

In the last several years this town has been flourishing. New apartment complexes seem to pop up overnight. The growth and the proximity to shopping, transportation, and other amenities make living in Sabaneta a great alternative to Medellín.

“I am very lucky that my passion is now my job,” says Chris. The 47-year-old Bradenton, Florida native has parlayed his love of the sport of tejo (pronounced tay-ho) into a tour business. “Tejo is the national sport of Colombia and I am the only foreigner that plays the sport competitively. This has been the best way to immerse myself into the culture and make new friends,” he says.

Chris created his Tejo in Medellín tour business two years ago. It’s a way of introducing tourists and visitors to the new sport and give them a unique experience. Dubbed the “most explosive tour in Medellín,” the game involves throwing a weighted metal puck into a clay pit that has targets containing gunpowder. When the puck hits the target…it explodes. The tour package includes a lesson, the history of the sport, two hours of court time, and three drinks of either beer, aquardiente (the local firewater), or a soft drink.

“No tejo court caters to expats,” Chris explains. “I saw an opportunity to teach the expats to play and make it a fun experience.” Chris rents out the court space in the public sports complex, in nearby Envigado. “As my business grows I would like to have my own space,” says Chris. “That will make it easier to have set hours and make special arrangements for larger groups. I would also like to start my own tejo clothing line.” Chris markets his tour business on Facebook, Trip Advisor and through his website.

Traveling around Colombia to play in tejo tournaments allows Chris to meet people. “One of my favorite cities to visit is Bucaramanga,” he says. “The people are so down-to-earth and the climate is slightly cooler than the Medellín area.” His other favorite areas of Colombia include Jardin, where you can take a horse ride down to the caves; Salento, in coffee country, where you can see wax palm trees; and of course, San Andres, an island that has his favorite beaches.

When he’s not on the tejo court, Chris enjoys hanging out with his many expat friends and going to the movies. Many of the theaters show movies in English with Spanish subtitles. “It’s kind of the best of both worlds,” Chris says. “You understand the English and can practice your Spanish at the same time.”

“Driving around Medellín can be tough in a car due to the traffic,” Chris says. “So, I use a scooter to get around. It’s a fun way to explore the city.”

But when it comes to eating, Chris remains a homebody. “I’m not that big of a fan of traditional Colombian food,” he says with a smile, “I prefer to eat in restaurants owned by foreigners.” His tastes range from a simple American-style breakfast and burgers at the Flip Flop Sandwich Shop, to more elegant dining at Carmen’s. Even a meal at this white-tablecloth restaurant will only run you about $20 for an entrée and $6 for some of the most decadent desserts.

Doing what he loves has become a reality for Chris. He is recognized around Colombia as “El Gringo” and many of the Colombians want to play with him because of that. He has become somewhat of a foreign ambassador for the sport. “They call me Miss Congeniality of tejo,” he says with a smile.

How to Slash Your Airbnb Costs by up to 60%