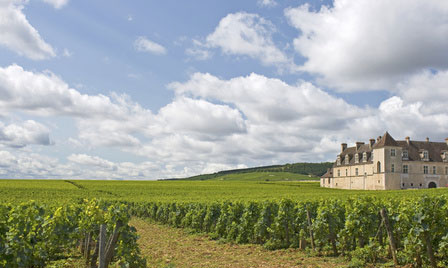 It’s always a bit of a bummer when a vacation comes to an end, even if you live in Paris. I felt this way recently driving back north after spending one fabulous week with my family in sunny Aix-en-Provence in the south of France.

But as I gazed at the scenery flashing past my window, I suddenly began to feel more cheerful.

The countryside was becoming increasingly curvy and lushly green, the hills splashed with bright yellow fields of rapeseed (commonly referred to as “canola” in the U.S. and Canada).

The exuberant patchwork landscape was captivating, and my pleasure only grew as we began to see hillsides perfectly striped with row after row of immaculate green vines. We were in wine country—Burgundy.

My husband turned to me: “Shall we stop by Goisot?” I quickly agreed.

Goisot isn’t the name of a town. It’s the name of a small winemaking domain in a postcard-perfect northern Burgundy village called Saint-Bris-le-Vineux, not far from Chablis. The Goisot family has been making wine in the region since the 14th century, while some Saint-Bris vineyards date back to the 2nd century. Most wines with the Saint-Bris appellation are considered respectable and easy-on-the-tongue, though not particularly remarkable. Goisot is the dazzling exception.

Goisot wines—organically produced, hand-picked—are known among connoisseurs in the wine world for being complex, racy and delicious, easily competing with bigger and more famous domains from Chablis. But because the Goisot is such a modest producer, unless you’re a Burgundy wine expert or enthusiast you’re not likely to have encountered it.

We happen to know about Goisot because several years ago we bought a dilapidated 19th-century weekend house in a village about 25 minutes away from Saint-Bris. A neighbor told us of the vineyard, we visited, and quickly fell in love with Goisot’s Aligoté—a fresh, dry white wine with a spicy finish. Now we always keep our cellar stocked with it and beam with the pride of a local when guests ask where we found our delectable wine. (And it gives me an additional secret pleasure that we can buy it for just under $9 a bottle—it’s typically priced at $15-18 online in the U.S.)

Being able to discover wines like Goisot is just a taste of what l love about having a home in Burgundy. It’s so cool to have insider knowledge of Burgundy’s little-known oenological gems, as well as to have easy access to some of the best vineyards in the world. From our home in the Yonne, Chablis is a scenic 40-minute drive away and the wines of Auxerre are even closer. Sancerre, though not in Burgundy, is only an hour away. The phenomenal wines of Dijon and Beaune are farther away, but they make for an easy day trip.

Of course, another cool thing about having a home in Burgundy is that it’s only two hours away from Paris. Our home is in the Yonne department of northern Burgundy, a fairly rural area but gorgeously hilly and infused with deep, rich colors of brown-green woods and golden fields. Burgundy is the perfect contrast to the hubbub of the city: a place where fresh air, tranquility, and space are available in abundance. And when we’re ready to face the action again, Paris is waiting.

Great value properties in Burgundy are available in abundance too: a two-bedroom, exposed stone house (needing a little “freshening”) in charming Saint-Bris is currently for sale for about $110,000. In a hamlet deeper in the countryside, near a village called Treigny, there’s an adorable two-bedroom exposed-stone house, fully renovated, on the market for $122,000. Near the legendary wine town Beaune, you can buy a pretty 19th-century, entirely renovated, three-bedroom house with a magnificent view of the Burgundy canal for $175,000.

Back at Goisot, as we load our car with enough wine to last several weeks, one of the Goisot sons tells us that because a hailstorm damaged Saint-Bris crops earlier this year, there won’t be as large a production as usual come harvest time. They’re advising regular customers to reserve cases in advance if they don’t want their personal stock to run out. Glad for the tip, we make a note to reserve. And we drive off feeling happy and grateful to Burgundy…for its natural beauty…its glorious products…and for providing us with the perfect finish to our vacation.