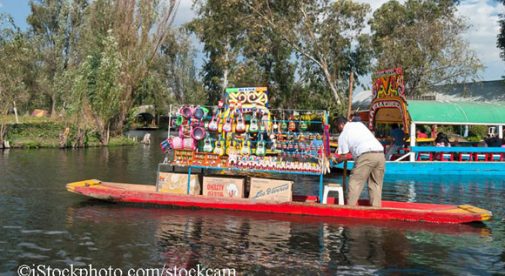 After moving to Mexico City last year, I quickly learned the best places to buy fresh groceries and artisanal goods are the capital’s traditional mercados.

Visitors to any of the city’s over 300 public markets can expect a delightful sensory overload. Imagine the smells of cooking meat and chili powders intermingling with the sounds of shouting vendors and roving mariachis, while thousands of visitors squeeze past one another in search of everything from exotic flowers to used bicycles.

Here are four of the best mercados that you won’t find in the tourist guides.

On what used to be the southern shore of Lake Xochimilco, the Aztecs developed hundreds of miles of canals, which they lined with the beautiful floating gardens known as chinapas. Many of these chinapas are still being farmed, and most farmers bring their crops directly to market the same way their ancestors did, in colorful gondola boats called trajineras.

Mercado Xochimilco is the premier destination for perusing the rare plant species grown in the nutrient-rich chinapa soil. You can easily spend a whole morning wandering aisle after aisle of giant neon-colored flowers, but make sure you sample some of the local delicacies too. I recommend the chileatole, a pre-colonial beverage made with peppers and corn, as well as the surprisingly delicious frog tamales. The chileatole costs about $1.40 and the tamale $2.30.

In addition to the city’s many daily markets, there are also flea markets called tianguis that operate one day per week. Tianguis vendors typically fall into one of two categories. The first kind is the family chef serving one or two dishes from their grandmother’s recipe book. The other is a dedicated collector of niche items, which could be anything from son jarocho records to indigenous Oaxacan jewelry.

Encompassing 10 blocks, La Lagunilla is the biggest and most diverse of the tianguis markets. Serious shoppers arrive bright and early Sunday morning, though many stick around for the remainder of the day to sip homemade micheladas (beer with lime juice in a salt rimmed glass) with friends and family. My favorite stall is on Calle Matamoros, just east of Calle Peralvillo. It’s a small tent grilling huge Mexican sausage sandwiches filled with different fresh peppers. Right next to it is another great stand that sells 32 oz. micheladas.

Mexico City’s proud tradition of rebellion is still very much in play. Counterculture and the artistic avant-garde are alive here in a way that you no longer find in many Western capitals. On the streets and in the cafés, you’ll see legions of punk rockers, underground poets, and bearded Trotskyists doing their thing with other members of their respective groups. But on Saturday mornings, these disparate tribes all come together on the winding Calle Saturno, as they’ve done for over 30 years.

Expect a rowdy but friendly scene at this alternative-minded market, replete with live rock bands and thousands of eclectic misfits combing the stalls for vintage leather jackets, radical political pamphlets and DIY t-shirts, and pins and patches of every size and color. I’ve bought some great stuff here. Near the northern end of the street, there are several stalls selling Latin American military surplus. For $13.80 I bought a unique vintage Mexican army jacket. At another stall toward the middle of the street, I’ve picked up several vintage Fred Perry polos for $23. These would cost at least twice as much in the U.S. My favorite purchase was an anthology of Mexican rock music from the early 1980s, which was sold on a bootleg cassette for $3.70.

In this still very Catholic country, the public regards las brujas, or witches, with a mixture of fear and reverence. Though your neighbors may frown upon sorcery, sometimes you just really need to cast a love spell on the object of your affection, so you sneak off to Sonora where the brujas sell their wares.

Inside the market, the air is thick with incense and burning sage. The tiny stalls overflow with magic herbs, skull-shaped candles, healing crystals, and statues of Santa Muerte, the patron saint of death. The official policy among vendors is that there’s no black magic being sold at Sonora, but as it is with many things in Mexico, exceptions can often be made for the right number of pesos.