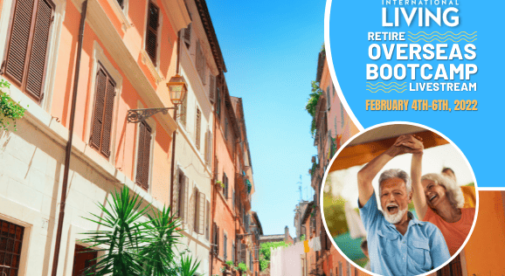 Things may feel uncertain at home—but overseas today, you have a once-in-a-generation opportunity to put your dream retirement in place—and our experts are gearing up to show you how.

That’s how Lori Gold describes her adopted home, a few blocks from a Caribbean beach where, she says, “The sand literally looks like sugar…you’d think you could just spoon some into your coffee.

“I live in an amazing, brand-new condo,” she continues. “It has two bedrooms and three bathrooms. I have two Jacuzzis and a beautiful rooftop pool. It came fully furnished, everything included. I even have access to a first-class gym.

“My total monthly expenses run about $2,000—and that includes my rent.”

Just meditate on that for a moment. Lori spends about $24,000 a year to live well, a few blocks from a palm-lined shore, in a laid-back town where the sun shines year-round.

But in the right spots abroad—as Lori has discovered—it can fund a jet-set life.

And that’s the point: Your dollars expand in the right places beyond our borders. More so now than ever.

From February 4-6, our team of International Living experts from around the world is gathering in Las Vegas to show 300 of your fellow readers where—from European hideaways to Latin American escapes—you could make the most of that.

We’re sold out on the ground, but until February 1, you can still lock in a front-row ticket to attend via Livestream, here.

Our editors, correspondents and experts have been living and working overseas for years (some for more than two decades now), and they report that the volume of opportunity they’re finding today is unlike anything they’ve ever seen.

That’s why we’re hosting this event early in 2022. Because it’s an opportune time for you to get your own overseas plan in place so you can—

Now Is the Time to Put Your Plan in Place

Maybe retirement is still on your distant horizon—but you’d love to have a lock-and-leave place at the beach or in a historic city you could visit (that generates income when you’re not using it).

Overseas, we can show you how and where you could have your own getaway like that for as little as $166,300.

Maybe you’re already retired—and worried that your nest egg might not stretch as far as you thought it would… that you’ll be pinching pennies or working part-time in your 90s to make ends meet.

Let me stop you right there.

When you attend the Retire Overseas Bootcamp LIVESTREAM, we’ll show you the places where you can live better than you do now, on as little as $1,700 a month, all in.

Maybe you’re comfortable in your retirement—but you like the idea of more adventure, of a richer life full of travel, of an escape from the drumbeat of negativity on the nightly news.

Let our team of experts help make that happen for you!

We’ll help you design a part-time or a full-time escape overseas that’ll make you a jet-setter in the eyes of everyone back home.

Here’s Why the Timing Is So Good Right Now

Inflation may be a concern at home, but overseas the U.S. dollar is incredibly strong right now. Instead of your cash losing value—you’ll find it gaining.

In the right spots on the planet, the real estate values are excellent, the prospects for appreciation are strong, and there is serious money to be made from rentals, too.

In the U.S. today, real estate prices have gone through the roof.

But overseas right now, you can still buy at low cost in markets set to take off.

The trick, of course, is to know where those markets are. But that’s something our experts will be exploring at our Retire Overseas Bootcamp.

Reserve your front-row seat as a LIVESTREAM attendee here now—doors close at midnight on February 1, 2022.

Community and Connection for Expats Has Never Been Stronger

Right now it’s a good time to be an expat overseas.

I say that because you can gain a real sense of community and belonging when you go abroad today.

That may seem counter-intuitive, I realize.

Here you’re going someplace new—where you might not even speak the language well—and I’m telling you you’ll fit in. Maybe better than you do at home.

But today—that’s overwhelmingly true in the places we at International Living recommend overseas.

Kathy Bowen, an expat from New York, settled in Tamarindo, a beach town in northern Costa Rica. She puts it this way:

“I find people here just have more time for each other—it’s much easier to get together with friends than it is in New York. Everyone is pretty much within 10 minutes of each other. So it makes things like ‘Bloody Mary Saturdays’ fun and easy.”

“People seem to have less anger in general. They’re happier with less, they have time for one another, and there’s a kindness and willingness to lend a helping hand—particularly to older people—that has been particularly comforting for me.

“I have been tapped on the shoulder waiting in line, for example, and sent to the front so I don’t have to wait. Little things like that have made life all-around enjoyable.”

They are extremely family-friendly and community-minded.

Expats regularly share stories about their neighbors leaving bags of vegetables from the garden on their front stoop. Or how they’re included in celebrations and special events.

But beyond that, what you’ll find today in the places we like is a well-established community of expats, too. And these folks have paved the way ahead of you.

They’ve figured stuff out. This one knows a taxi driver. That one organizes volunteers at the school. This guy over there needs a fourth for golf. That woman runs a once-a-month lunch group…

So it’s easier than ever today to plug into a community of fellow expats, too, who will help you settle in, become integrated, and feel comfortable.

It’s Never Been Easier to Be an Expat

Plus—and this is critical—it’s never in history been easier to be an expat than it is today.

More than 40 years ago, when International Living began, going abroad demanded a certain amount of gumption.

You took a leap of faith.

That was before the days of cheap airfare. So you’d go, and you’d stay. And you’d keep in contact with the folks back home by snail mail. There were some high barriers back then.

But today, it has never been easier to go abroad.

The internet has changed everything. Today you can have your feet buried in the sand on a beach in Belize and be helping your grandson back in Michigan with his math homework on Zoom.

And even small, out-of-the-way spots have wifi access. Roads are better than they were 40 years ago. Flights hop across countries for a handful of dollars.

…when, that is, you have some good guidance.

And this February 4-6, that’s what my colleagues and I would like to give you. Reserve your Retire Overseas Bootcamp LIVESTREAM seat here now.

There’s another reason NOW makes so much sense.

Countries want you to come.

To a degree we’ve never seen before, countries are laying out the welcome mat, swinging the door open, and making it worth your while to go in.

In some cases, they’re effectively throwing money at expats—with benefits worth tens of thousands of dollars.

Panama, for instance, has its Pensionado visa, which was created to attract foreign retirees just like you.

The bar to qualify is low. Folks who do can stay long-term with no hassle and it’s simple to arrange.

With this special status, you get great tax breaks and discounts on all sorts of things—like 25% off airline tickets and monthly energy bills, 50% off entertainment like movie or theater tickets, and the list goes on.

Panama was at the forefront of this movement to attract expats, but now more countries are jumping on this “we want you” bandwagon and making it easier for you to come.

Even if you’re not yet ready to retire.

This February at our Retire Overseas Bootcamp, our experts will help you sort out what programs and what places would make the most sense for you.

For all the details—and to reserve one of the last LIVESTREAM seats—go here. Doors close February 1.