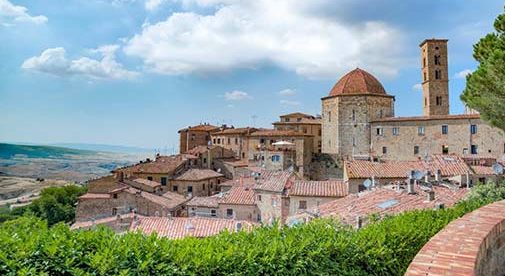 Right now, you can own a historic home in a Tuscan town for less than $100K.

Your three-story home hugs the medieval wall of an Italian village. The settlement has an ancient origin, dating back to the Etruscan civilization. Your views are breathtaking. Far below are fields of vines and olive trees, and vast tracts of forest.

From this hilltop in the Terni province, you can see all the way to Tuscany and Lazio. It doesn’t get much better than this…and it only set you back $95,664.

This home in the medieval village of Monteleone d’Orvieto is just one of many bargain properties I’ve come across in preparation for my next scouting trip to Italy.

Like many of you who have emailed me this week with your future travel plans, Italy is high on my agenda.

The cradle of the Renaissance, the birthplace of opera, the country that gave the world Italian food… Italy is jammed with treasures, many of its cities are themselves works of art. You can wander along old Roman streets, stand in the shadow of the Colosseum, or just sip espresso with the locals. For culture look no further, enjoy Verdi in the birthplace of opera, visit the lavish home of the Pope adorned with priceless works of art…and the cities are only the start…

Best of all, its real estate is dirt cheap…and soon to be even cheaper…

Europe has been rocked hard by the current crisis. But particularly southern European counties like Italy and Spain. This is catastrophic for their already fragile and debt-laden economies. We will see big falls in the value of best-in-class real estate. I’m figuring on 30% in Italy on prices that have been already been falling for 15 years. The value of marginal real estate in the hills and empty villages will go to zero.

The thing is, there is very little appetite among Italians to take on investments. The country and economy is sick and lacking confidence. There’s no optimism in the future. Even people working in the tourism industry, which until recently was booming, sound beaten down and weary about the future.

I don’t blame them. Italy’s economy is in a terrible state. The country has struggled since the 2008/09 financial crisis and it looks to be in a state of almost permanent political crisis.

Yet, it was, and remains, a blue-chip tourism destination, and the fifth most-visited country in the world.

True, right now Florence is empty…Rome’s Colosseum lies vacant…and the gondolas of Venice have remained moored for weeks. But they won’t stay that way forever…

And when Italy starts moving again, we’ll be there to profit.

Low real estate values, combined with high tourist occupancy (in a regular Italian tourist season), equate to substantial rental yields. Last time I visited Florence I found a completely renovated Airbnb-ready apartment for €185,000 ($203,584) close to Fortezza de Basso—the largest historical monument in the city. The 500-square-foot apartment had two bedrooms and was close to the other main Florentine attractions.

To run conservative numbers: You rent for 250 nights, just under 70% occupancy. That occupancy is extremely high in a normal market but in a place like Florence it’s only OK. Take those 250 nights at an average of $150 a night for a total of $37,500.

This current crisis is likely to see best-in-class real estate values in cities like Florence drop by 30%.

But if you’re not thinking about rental income and just want your Italian bolt-hole getaway, there is literally no lower limit to what you can buy.

I’m sure you’re familiar with the free home trend that made headlines around the world. Basically, it was a way for struggling Italian towns, experiencing mass emigration, to replenish their population and revive the local economy. Most of these homes were listed for €1 but required a minimum commitment of €5,000 to renovate.

In the wake of this crisis, we’ll see this free home trend continue, even accelerate, and move further north into the traditionally more affluent part of Italy.

My advice: don’t be taken in by the headlines. Sure, you buy for €1—and there are some decent properties in the pile—but you’ll still need to renovate. Very quickly, €1 becomes €30,000. Better to buy an already-renovated home for €30,000, where the hard work has already been done for you.

After the 2008 crisis, some of the best deals I found came from seizure auctions.

The government cracked down hard on owners who didn’t pay their taxes. And the revenue services were not shy about seizing properties.

But you needed to do your homework and buy in the right place. I personally favored locations with a strong vacationer industry, like the Amalfi Coast, Sicily, or Tuscany. Buy well at auction in any of these locations and you could do well on short-term rentals.

This current crisis is likely to turn up similar opportunities, with even deeper discounts than we saw before.

But you have to know how to find one of these auctions, and what to do to ensure you’re getting the best deal. Like a lot of Italian bureaucracy, buying at a seizure auction isn’t easy to figure out. But once you do, you can find a killer deal…

These are the kind of deals I’ll be watching out for in the months ahead as this crisis unfolds.

If you’re looking for your own slice of la doce vita, stay tuned. I’ll be bringing you more soon…

Ronan says: I’ve really enjoyed reading through all your travel plans this week. I’m sharing more of them here. Let’s hope you can fulfill them soon.

Comment from Jennifer: I want to visit northern Italy’s Lake District. Then make my way to the Costa Brava in southern Spain!

Comment from Phil: Hi Ronan, thanks for the info on real estate. Whenever I can travel again, I want to see the following places.

Those would be my “high priority” choices, and not in that order. I have some idea about my plans to go offshore. I am 68 years old, and am delayed on the move due to an elderly mother who I help care for. I hope to be able to get past this pandemic thing, and travel soon.

Hope you are well and be safe.

Comment from Patricia: I think I’d like to move to Portugal. I’m retired now and on my own, so I’m looking for someplace near an expat community, close to transportation so I can either walk or grab a bus/train. I don’t plan on getting a car. But I want to be able to travel to other European countries. I’ll need to be within walking distance of markets. I want to try a short-term lease in Portugal this year for at least a month so I can determine which area I like the best. I took an International Living tour to Portugal and Spain a few years ago and fell in love with Portugal. But that two-week trip didn’t give me enough time to look around much. Now that I’m retired, I have the time, so I just need to figure out where to live. I want to find something in Portugal that I can rent for less than $2,000 per month. And I really want an ocean view. I don’t need to be on the beach, it’s just the view that I want.

Portugal is overpriced now, but if you find any deals there for a condo with an ocean view, please let me know. I prefer new construction, thinking that might be built with some better structural requirements since Portugal is near various earthquake faults. I was going to look around Lagos or Cascais. I still haven’t been to northern Portugal. And I read that there was some new developments for retired communities but I’m not sure where those are located. Since I’m 67, I’d be interested in that.

I’ll keep looking at your RETA ideas. You’ve been focusing a lot on Mexico and Panama, but I’m not that interested in those. I’m waiting for you to get back to Europe. Any scouting trips coming up?

Thanks for all your hard work…hopefully you have time for some fun while you’re scouting things out and making deals for us.

Ronan’s response: Thanks Patricia. Because of the current travel restrictions, we haven’t any scouting trips scheduled to Europe. But stay tuned to your RETA alerts for updates. I know that as soon as I can fly again, Portugal will be one of my first stops. You can read my take on our opportunity in Portugal here. But once I get back there again, I’ll be bringing RETA members a comprehensive report…including any new crisis opportunities that might be emerging.

This Country Tops Your Travel Wish List…and Mine Too