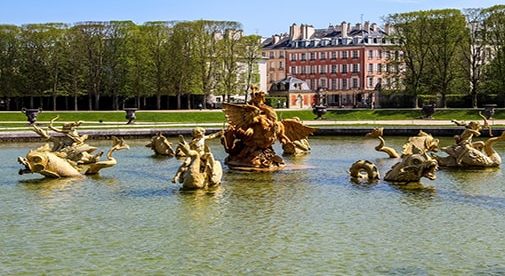 The city of Versailles is less than an hour from the center of Paris by train, and offers a lower cost of living.

Denver, Colorado native Monique Lewis had dreamed of living in Europe ever since childhood. As a student, she studied abroad in Austria for three months and spent part of that time country-hopping through Germany, Italy, Poland, Hungary, Switzerland, and the Czech Republic. But years later, France, and the allure of beautiful Paris, stole her heart.

“I idolized Paris from books and movies. I thought it would be an idyllic place to live, and less stressful than the States,” says Monique. “I loved the idea that French people place more emphasis on enjoying life than working.”

The big question, of course, was how could she earn her keep in France? Monique was a journalist in New York City, and she wasn’t fluent in French. Even more dispiriting, the salaries she’d seen in her field were abysmally small. But she couldn’t shake the feeling that France was her “first true home away from home.” In 2016, she decided to throw into action a sharply focused two-year plan to make her dreams reality.

The first step? Move back to Denver to save money. Next, she began taking intensive French classes at night and making professional contacts in Paris. Third, she hired a French resume consultant to rework her profile. Her search for work took a little more than two years, but in November 2018, Monique landed a job as a communication program manager for the MBA program at HEC Paris, a prestigious international business school just outside of Paris.

“I manage internal communications strategy for the administration,” Monique says. “I mostly work in English since the MBA program is taught in English.” Her duties include writing speeches for the MBA dean, helping students with their communication strategy, and managing student complaints about the program.

Monique finally realized her dream of moving to Paris in early 2019, although technically she lives in Versailles. Yes, that Versailles—the enchanting medieval town that Louis XIV made world-famous with his glittering château.

“I like that Versailles is quiet, beautiful, clean, and has a lot of good restaurants from Moroccan to Vietnamese,” Monique muses. “Versailles is touristy but only for the château. There is a lot of history to discover about the city, but most tourists miss this. In a way, this is nice because it means it’s not overcrowded, and I can enjoy my time exploring the city.”

Even though she wishes she could live a little closer to Paris, the one significant advantage of living in Versailles is the rent. “The rent I pay in Versailles would be at least four times as high in New York City,” she says. But in New York she wouldn’t see a magnificent palace outside her window every day. “I love living literally right next door to it.”

Of course, France’s bureaucracy and laidback pace does take some getting used to. Monique admits that she found setting up her bank account, getting phone service and the internet, and getting furniture delivered to be much more complicated than she expected. “Yet, these are passing moments, because the next day I’ll walk in a garden or along the River Seine and thank God for making my dream come true.”

Despite administrative headaches, the move has held a wealth of delights. “I love the cultural activities in France, from comedy to opera to visiting castles. I like that France places a high value on presentation and beauty—everything about the culture is beautiful, from palaces to villages,” Monique says. “There is always something new to discover.”

She’s also thrilled with the fact that other European countries are just an-hour-or-two’s flight or train ride away. The close proximity allows her to travel easily and affordably. “This summer, I went to the U.K., Spain, Greece, and I went hiking in the Pyrénées mountains for the first time.”

“My mother recently said I look happier than I’ve ever been,” Monique says. “I’m still in awe that I’m here.”

Travel Planning Pays For My Life In The South Of France