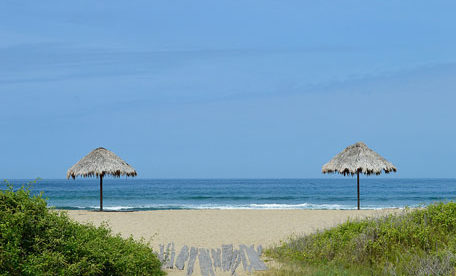 When you live in another country, every once in a while something happens that makes you stop for a moment and realize how much you have been changed by the experience.

My wife, Rita, and I have been living in Salinas on the sunny southern coast of Ecuador for three years now, so this has happened to us a few times before…but we are certainly not immune, as I found out recently.

As usual, I really didn’t notice when it happened. It all seemed so normal. I was on my way out to La Libertad, the commercial district of the peninsula, to run a few errands.

As I caught the bus, I saw three older men hurrying across the street saying “Caballero, caballero.” Since this means “gentleman” or is sometimes locally used for “young gentleman,” they had my attention.

“Esto va a La Libertad?” one asked, wanting to know if this bus would take him to La Libertad? I replied, telling him it would take him close to the Aventura, which is a sort of mall right in the heart of the district. They thanked me, and we all got on the bus.

I didn’t think any more about it, as soon I was in the middle of the hustle and bustle of La Libertad in the busy early morning. I picked up a fresh pineapple (75 cents for a small one, $1 for a large one), and some carrots. The smallest bag of fresh carrots I could find weighed two pounds. However, since it was only 50 cents, I went ahead and bought them.

On my way back to the bus, a younger Ecuadorian also asked me about the bus’s route. He was a bit more succinct, just catching my eye, pointing at the bus and asking “Santa Rosa?” I nodded and replied, “Si” letting him know the bus would go to the Mall first, and then Santa Rosa.

I sat on the bus as we headed back to Salinas, and it finally dawned on me how unusual both of my route inquiries had been. It’s true I was dressed pretty much like all of the guys on the bus—loose fitting shorts, a t-shirt, sandals, sunglasses, and a small pack slung over one shoulder. Also, after three years under the equatorial sun, my normal skin tone is darker than it was. I no longer look “tanned,” that sort of reddish tint is gone, and I’m more browned than bronzed. But still, there is no way any local would look at me and not know that I’m a gringo.

And yet, before I got on each bus, different people made two interesting assumptions—first, that I would understand them and be able to answer, and second, that I might actually have the information they needed.

As I reflected on the morning, I also realized that I had gone from shop to shop, communicating in Spanish, and not really thinking about it much.

Not that I am fluent by any measure, or that anyone would confuse me for a native speaker. In fact, since I learned French first, my Ecuadorian friends tease me relentlessly about my funny accent. But after living here a while, you pick up enough so that basic phrases become second nature. It’s a good feeling to know you can make your way in a different country, speaking a little of their language.

So, as Rita and I get into our fourth year of living in Ecuador, it’s nice to know that we’re becoming so well integrated into a place that we are happy to call home.

Usually when people think about moving to the beach, it is to enjoy sunshine, surf, sand, and good weather. When my wife Rita and I moved to Salinas, Ecuador on the Pacific coast, great weather was at the top of our checklist.

My wife and I have been living the “endless summer” lifestyle in Salinas Ecuador for three years now, and I have to say it has been pretty fantastic. We love how the waves are the last thing we hear as we fall asleep, and that they are the first sound we hear when we wake up.