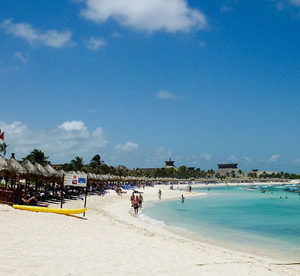 As a medical tourist you will save money on your health care, giving you the chance to travel the country.

The cost of elective procedures such as dental and cosmetic surgery is cheaper in these four countries than in the U.S., even when you take the cost of travel into account.

Because of its high-quality and low-cost medical care, and the U.S. affiliations of several of its hospitals, Panama City has become a popular medical tourism destination.

Many Panamanian doctors are U.S.-trained and you’ll often find they can speak English. Of course prices may differ depending on where you are in the country, just like in your home country, but on average Panama is still more affordable for most procedures than the U.S.

Cosmetic surgery is much cheaper in Panama with a neck lift costing $6,800 compared to the U.S. price of $11,000. Dental work is expensive in the U.S. with porcelain veneers costing between $1,200 and $2,000. In Panama you can get the same procedure for 50% off…sometimes even more.

People from the U.S. and around the world are realizing the benefits of Costa Rica’s high-quality, low-cost medical services. It is among the top five countries visited by Americans for medical treatment.

Health travel has grown in the country due to the hundreds of board-certified physicians, surgeons and dentists practicing in Costa Rica.

Around 15% of international tourists go to Costa Rica to take advantage of its medical services, mostly cosmetic and dental care.

Quoted $35,000 to $40,000 for the procedure in her hometown of Denver, Gail Humbert traveled to Costa Rica for teeth implants for a fraction of the cost. She took two trips to San José, spending two weeks each time, for her procedure and spent a total of $14,000—that included flights, accommodation and her dental work.

Gail says, “The professionalism and service were amazing. They went above and beyond, with a personal touch that you would never see in the States. They even set up and drove me to appointments for other medical care I could not get in the States.”

Mexico is a conveniently located destination for Americans to travel to for medical procedures. In fact, Mexico’s combination of well-trained doctors, modern hospitals, low prices, and proximity to the States has made it a popular medical-tourism destination for U.S. residents.

There are some Joint Commission International accredited hospitals in Mexico City and Monterrey…and other clinics, scattered throughout the country, which are frequented by medical tourists.

Mexico originally became popular for dentistry and cosmetic surgery, but travel for other procedures is now growing.

Malaysia, an ex-British colony, is a popular destination for medial tourism because of its low cost and efficient medical facilities. It has gained recognition in this area due to its health care being among the world’s best and most affordable. Medical expertise here is equal to or better than that in most Western countries.

Popular procedures include plastic surgery, gynecology, urology, orthopedics and cardiology. The Joint Commission International has accredited three hospitals in Malaysia. English is widely spoken and most physicians are trained in the U.S. or the UK.

Mary Percak-Dennett traveled from her home in Alaska to Malaysia for a knee replacement and saved $72,000 in the process. In 2007, her doctor quoted her $90,000 for the procedure to be done in Alaska, but for $18,000 she got the surgery she needed and explored Penang in the northwest of Malaysia.

She says, “My doctor in Alaska was surprised at how well the job was done. If I had the operation done in the States, they would have taken out the entire knee. The doctors in Malaysia said my recovery would be faster and I would be better able to assimilate the new knee because I still had my own kneecap.”

Even factoring in flights, you can save money by traveling overseas to have most medical procedures.

Other procedures that are cheaper overseas include:

A Doctor Explains: What the Affordable Care Act Means for Expats

Best Healthcare Systems in the World